Just like in any career path, sometimes hockey coaches around the United States come from unexpected places and through unconventional paths.

That was the case for Juno Nayagam, who is originally from Southern California and is now coaching high school and youth hockey in Minnesota.

Nayagam was exposed to hockey at a friend’s house when he was around 8 years old. The Los Angeles Kings were playing against Wayne Gretzky and the Edmonton Oilers, and Nayagam saw the game on TV. That day changed his life and sparked a deep passion for hockey that eventually led to coaching.

“When I was in high school, I worked at an ice rink,” Nayagam said. “It was one of those jobs that was perfect for me because my boss was really cool to the workers. It was a bunch of guys and a few girls who worked there and once we got done with everything, the rink was inside of a mall, so the doors would lock by themselves. He said, ‘You guys can stay here and skate as long as you want, just make sure the doors are shut when you leave.’ We would stay there until two or three or four in the morning playing hockey. One of the guys learned how to drive the Zamboni, so we made sure we left the ice nice and neat when we left.

“At that job, there was a skating school there. There were a lot of figure skating instructors, but there weren’t a lot of hockey instructors there at the time. So when I was 16 or 17 years old, they asked if I would start teaching hockey skating classes.”

Nayagam’s coaching career began there and has continued through his move to Minnesota, where he attended law school. He got his degree, but ultimately discovered his true passion was teaching and coaching hockey.

Nayagam attended USA Hockey’s National Hockey Coaches Symposium in Lake Placid, New York, which is held for aspiring coaches seeking to attain their Level 5 coaching certification, this past August. That event had a major impact on his coaching career.

“I’m not exaggerating here, because I’m a hockey guy and it’s what makes me happy, but those were four of the best days and one of the best weekends of my life,” Nayagam said. “I didn’t want it to end. You’re there with a few hundred men and women who are just really passionate about the game. Every conversation you have with people is about hockey.”

Some of the best and brightest minds in hockey attended the symposium, which provides attendees a unique opportunity to learn the game from the game’s elite.

“I had a little conversation with Jon Cooper of the Tampa Bay Lightning, who was there,” Nayagam said. “Mike Sullivan, a really funny guy, who is the coach of the Pittsburgh Penguins. Just being in that environment, first of all from a social perspective, you’re socializing with all these hockey people who are just wanting to learn more. One thing about hockey, particularly with coaches who coach at somewhat of a high level, hockey people are great people. And as soon as they know you’re a hockey person, we tend to gravitate toward one another. Being around hundreds of men and women who are all hockey people, it was like walking into a room where you knew everybody just because you all had hockey in common. 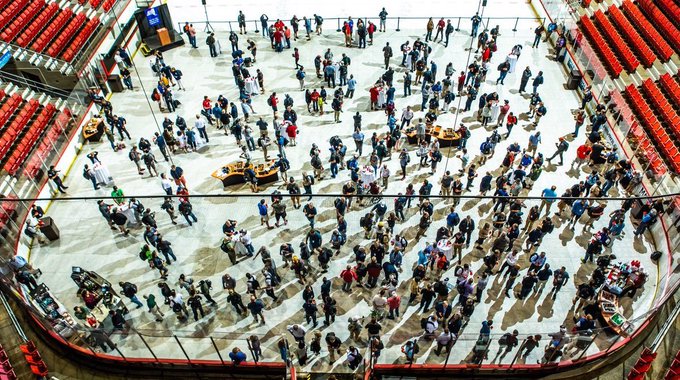 The 2018 National Hockey Coaches Symposium in Lake Placid, N.Y., welcomed 450 aspiring coaches from across the U.S. to learn, teach and interact with the world’s elite bench bosses and hockey luminaries.

“From a hockey perspective, I’m a life-long learner. Even though I’m not in school any more, I always try to find ways to learn. I take a lot of classes. Any chance I get for a hockey seminar class, I’ll try to take that. So being there, I felt like a sponge. There was just so much information. Some of it I knew, but there were other things I didn’t know or maybe hadn’t explored yet. I felt like I was constantly learning.”

Nayagam hopes to take the information he learned from his time in Lake Placid and continue to inspire his players every day. He remembers the foundation of what a hockey coach is supposed to be and how they made him feel growing up.

“I remember literally the first time I touched the ice on skates and how it was exciting but scary,” Nayagam said. “You were like, ‘What are you doing?’ You had no control of your body. And then the coaches that helped me come up along the way and how happy it made me, no matter what was going on in my life, the second I got to the rink it was like I could put all of that on hold. Because I was truly 100 percent happy, whether it was practice or a game. It didn’t matter. Hockey just made me happy.”