With under a month to go, ice is in good shape and crews are hard at work

Every mid-January for the last 13 years, Pat Weber steps out onto a frozen Dollar Lake.

He’s hoping the quaint body of water tucked away in Wisconsin’s Northwoods is sturdy and displays a great surface. This year, it was Jan. 13 when the former chief of the Eagle River Fire Department ventured out onto the frozen pond, and what he encountered is promising for hockey players.

“The ice doesn’t look bad,” Weber said. “We’ve got anywhere from 13 to 15 inches of ice there on the lake. We did our first plowing last Saturday and got our garbage off that had accumulated over the winter.”

The ice is thick and the surface is in solid shape. That’s great news as the 13th annual Labatt Blue/USA Hockey Pond Hockey National Championships is lurking right around the corner. Ice crews in Eagle River are already starting to prepare the ice for the hundreds of teams that will descend on the tiny town for the three-day event that runs Feb. 9-11.

It’s hockey time. Those are three words pond hockey lovers have been waiting to hear for over 11 months.

Weber, who retired as Eagle River’s fire chief in 2015 but stayed on to help prepare for USA Hockey’s largest single event each year, noted the ice is a little rough in some spots, but that’s normal. Firefighters and local volunteers used 11 trucks to plow the snow from the lake last Saturday.

Weber and his crew will work the ice until USA Hockey sends its representatives from Colorado Springs, Colorado one week before the event to help mold what will become the final product.

“They’ve already got the rinks laid out the way we want them,” USA Hockey Tournament Director Katie Holmgren said.

Eagle River started its typical cold weather in November, allowing Dollar Lake to freeze, noted Weber. The lake thawed a couple times and opened back up just before Christmas. It quickly froze again, and the recent long stretch of cold temperatures has kept the lake solid as a brick.

“We’re at the mercy of Mother Nature and what it wants to throw at us,” Weber said. “Some years it’s been fairly warm and the ice softens up somewhat and gets acclimated to the temperature and it’s not so chippy. Other years it’s really sub-zero and that ice gets really chippy. But there’s nothing we can do with it, that’s why they call it pond hockey.”

In 2015, Eagle River was doused with rain prior to the event, which left Dollar Lake a sloppy mess. Instead of cancelling the event and devastating hundreds of diehard pond hockey players, Weber had the idea of moving the tournament to the World Championship Derby Track in Eagle River. The event went off without a hitch.

“Honestly, Pat’s been such a big part of this event. Anything he needs, he tells us what we need to do and we’ll kind of work together on that,” said John Monteleone, U.S. Ice Rink Association Director, Education. He will be heading up to Eagle River from Colorado Springs for the sixth year with his crew to get the rinks ready for action. “It’s a simple event and with the same crew year after year after year, we all know what we’re doing and when we’re doing it, how we’re doing it.”

In 2016, Monteleone recalls the ice was 24 inches thick. Last year, Monteleone figures the ice measured 16-18 inches at the start of the tournament and flooding after each day’s action added a couple more inches. The ice was thick enough to play on, but not deep enough to park many vehicles on.

With three weeks left to go before the puck drops for the tournament, organizers love that the ice depth is near 15 inches.

“We’re thrilled with that,” Monteleone said. “I would expect with those cold conditions up there we’ll pick up a few more inches before we land locally.”

Said Holmgren: “I don’t know the last time we were this confident with how much ice there is.”

The Eagle River Fire Department and the USA Hockey folks who slave over the ice to make it the best they possibly can have established themselves as a well-oiled machine in their 13th year tackling the tournament.

“We’ve pretty much got it down to a science,” Weber said. “But like I said, when you’re dealing with Mother Nature, she never gives us the same thing each year. You get some similarities, but we’ve went from one extreme to the other.”

“I remember seven years ago when I started that we would have phone calls even months out, and now — not that we don’t like to catch up and make sure we’re on the same page — we changed our layout a couple years ago and the guys know it,” Holmgren said. “We’re comfortable with that fact that they can get it all laid out before we get up there — it certainly eases the process.”

Weber and his crew will be back out on Dollar Lake this Saturday to clear snow, since a couple inches of white stuff fell earlier this week. Weber noted about one-third of the snow on the lake will get pushed onto the beach and the other two-thirds gets pushed onto the shoreline.

When Monteleone and his four co-workers get to Eagle River on Feb. 3, event preparation will be in full swing. On Super Bowl Sunday, the crew will pull benches and everything out of storage and restore any of the 64 hockey nets that will be used. The next day, the guys will hop on skid steers, build up the areas by the tents and clear any excess snow off the lake. They will start making the ice and run some depth checks to ensure there’s ample ice in all areas. Since Weber and his guys have already built straightaways, Monteleone and his team will fill those in and form the 24 rinks. Any ice cleanup and leveling of ruts will also commence.

Monteleone looks forward to making the trek to northern Wisconsin every February to help make the tournament a success.

“I do a lot of events for U.S. Figure Skating, and this is one of my favorite events to do,” Monteleone said.

Holmgren is also counting down the days until she’s in Eagle River on Feb. 3 to handle vendors, take care of things on the administrative side and to also help ensure a great experience for all the players. 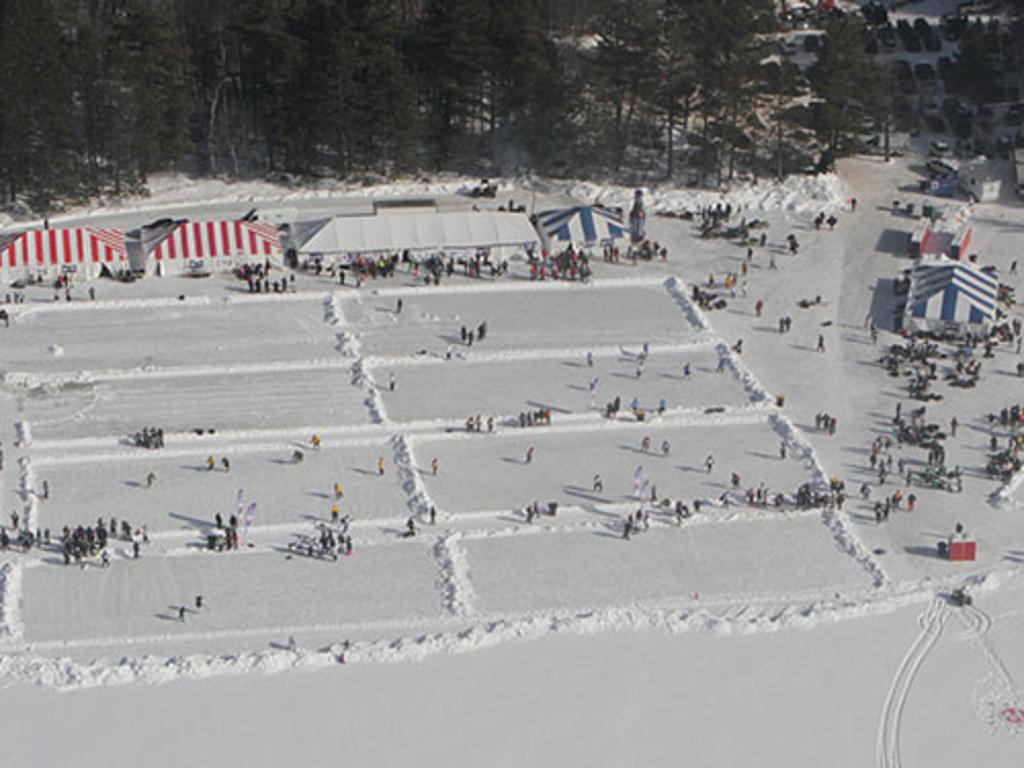