Participants skated with players from the highest levels

From the players to the parents, it’s fair to say all involved with the seventh annual IIHF World Girls Hockey Weekend considered it a success.

“It’s outstanding to see all the events focused on girls hockey across the country,” said Webster of the 120 events that were held between Oct. 6 and 8 in 31 states. “We’ve seen a 32 percent growth in girls hockey and women’s hockey over the past decade and that can be attributed to our passionate and dedicated volunteers.”

“To say the least, our local volunteers know how to celebrate current players and introduce our great sport to new families.”

Four NHL teams participated in the weekend, including the Carolina Hurricanes and the New Jersey Devils.

The Hurricanes hosted a girls clinic on Oct. 8 at PNC Arena.

“What we tried to do was celebrate girls and women’s hockey,” said Shane Willis, Hurricanes manager of youth and amateur hockey. “All took part in our first-goal program, which is an initiation to hockey — a league-wide initiative by the NHL and the NHLPA. All of these girls took part in a seven-week, on-ice program once a week in Raleigh.

“To take part in the IIHF Girls Hockey Weekend, we thought, ‘What better way than to invite girls to PNC Arena to celebrate girls hockey?’”

The 71 girls who registered for the event received two free tickets to the Hurricanes home opener Oct. 7 against Minnesota. But even more important was the fact they had the opportunity for photos and and an autograph session with three high-profile female players: two-time U.S. Olympic goalie Brianne McLaughlin, and former U.S. Women’s National Team defenenders Ashley Gagliardi and Dana Trivigno.

“Alyssa grew up in the Raleigh area, so having her here was huge for the girls,” said Willis. “They led the on-ice portion and talked to the girls about hard work, teamwork, determination and self-esteem.”

The Hurricanes also provided an ice cream social as well as a forum where the girls could discuss with Gagliardi, McLaughlin and Trivigno how they reached the levels they attained.

“This was an opportunity for young girls to meet someone to whom they can look up,” said Willis. “In talking with Alyssa, we made it clear we wanted them to lead and to follow with the American Development Model and age-specific training. We set up small-area games, worked on their skills and taught them.

“We’ve had a try-hockey-for-free event where we got extra skates and got them out on the ice for the first time in hopes they would go to a local facility and take up hockey.”

USA Hockey’s Emily West, ADM manager for girls and women’s hockey, participated in the Girls Hockey Weekend event hosted by the Devils at the Prudential Center.

“The New Jersey celebration consisted of an on-ice training session for players ages 5 to 16 and also going to the Devils home opener [the Devils also provided free tickets] against the Avalanche,” said West. “There were 53 girls on the ice and a select few were able to give the Devils high fives as they came through the tunnel onto the ice.

“During intermission, the Devils gave recognition to these girls and announced why there were there and they got a huge response.”

The Devils weren’t the only pro skaters in the building since the National Women’s Hockey League Metro Riveters also played a major role. One of the Riveters was U.S. Olympian Erica Lawler.

“The participants got to meet them in a suite that was provided,” said West. “After the Devils game, there was an area sectioned off for the girls who got autographs from the Riveters.”

Bruce Driver, a Stanley Cup champion with the Devils who coaches girls high school hockey, then joined with West and the Riveters to host a one-hour ADM-based practice followed by a question-and-answer session.

That session was one of the more enlightening aspects of the event at the Prudential Center.

“The girls were able to ask the Riveters questions like how they got started in hockey, where they’re from and what opportunities there are in hockey for females,” said West. “Ultimately, with these girls being able to be on the ice with the Riveters and seeing them as role models, it was huge for their confidence and for them to get a sense of what they could someday accomplish. It was important for them to see that there is support from USA Hockey, the NHL and the NWHL, and that we’re all partnered together in helping them reach their full long-term potential.”

As for how Girls Hockey Weekend boosts the female game nationwide, West said it plays a valuable role.

“Not only does it grow the game, but it also celebrates how far girls hockey has come,” she said. “Obviously, our goal is to grow the game and when these girls have an opportunity to be involved with the NHL and the NWHL and see these role models, they realize they were in the same shoes. They can talk to their friends and say, ‘I skated with Erica and Driver.’ And hopefully, that sparks their friends to try hockey.

“There are so many positive things that come from females playing hockey. We want everyone to have that experience.” 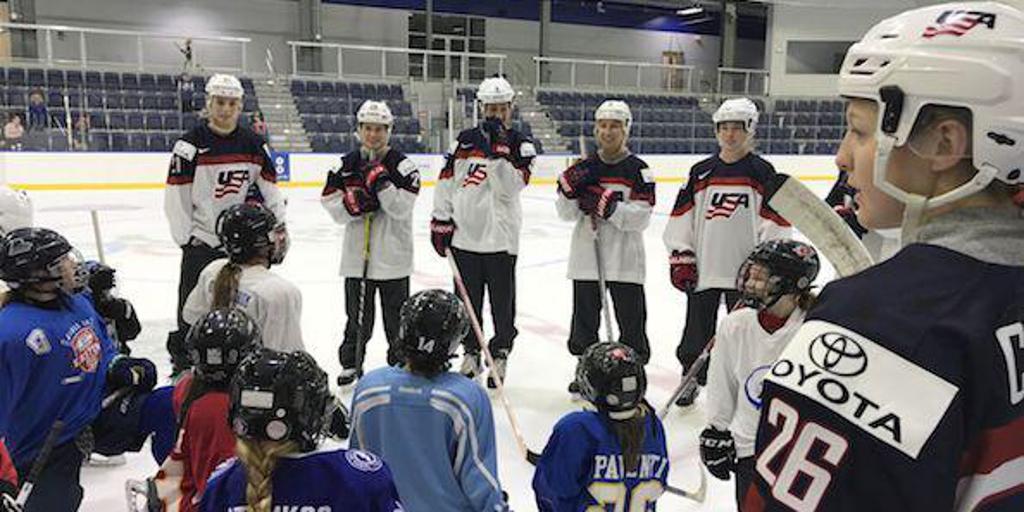