The 12th annual USA Hockey Disabled Festival will take place Thursday through Sunday (April 7-10) in Michigan. Featuring a record 90 teams and 1,139 players, the event will be held at Fraser Hockeyland Arena in Fraser, Michigan, with additional games being played at the St. Clair Shores Civic Arena in nearby St. Clair Shores, Michigan.

The Festival encompasses all four disciplines of disabled hockey: deaf/hard of hearing, special hockey, sled hockey, and standing/amputee hockey. The event will feature youth and adult sled tournaments; special hockey games; a three-game series with two blind hockey teams; and two warrior divisions for standing/amputee teams comprised of service members who have been injured or disabled during service. 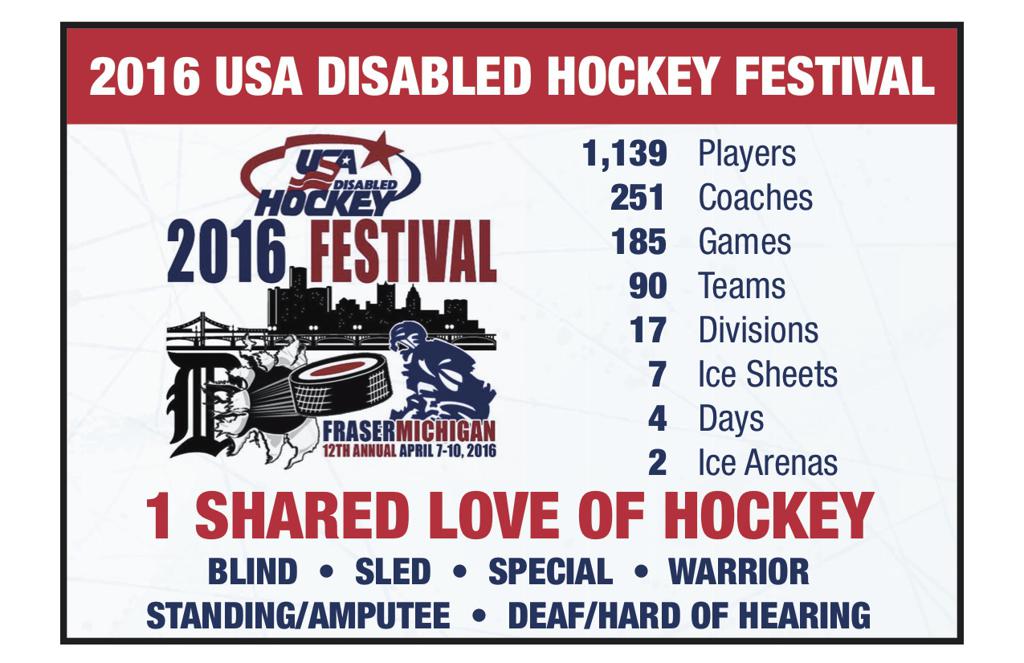 The largest disabled hockey event of its kind, the Disabled Festival continues to expand over the years. Last year, the event set records with 71 teams and over 1,000 players. The inaugural event in 2005 included 24 teams and nearly 300 players.

Bells & Whistles: Disabled Festival is a Highlight for Gui Bradshaw

Bradshaw is a USA Hockey official and special education teacher

In any game, from 12U to pros to adult hockey, a single turnover can change the complexity of the competition, especially in crunch time. Make a poor pass at neutral ice, lose focus on a line change, get outworked on the forecheck or backcheck, and quite often the end result will be the puck in the back of your own net.

Simply put, a key for any team that wants to be successful is to be on the “right” side of the puck possession battle – to avoid losing the puck and excel at stealing it. It only makes sense that if you possess the puck more than your opponent, your chances of winning will increase. According to former NHLer Lance Pitlick, creating turnovers and regaining puck possession is a skill and one that can be learned, regardless of your age or stage of your hockey-playing career.

“If you don’t have the puck, you can’t score,” said Pitlick, who played 12 seasons in professional hockey, including time with the Ottawa Senators and Florida Panthers. “A point I try to drive home to players is that we want to get out of the defensive zone as quickly as possible because those are hard minutes. Let’s get into the offensive zone, where the minutes are easier. Once you create those turnovers and spend more time with the puck on offense, it’s a better return on your (physical) investment.”

Pitlick is currently an off-ice stickhandling, shooting and puck possession guru, who has worked with over 1,000 players of all ages and skill sets, through two websites – onlinehockeytraining.com and sweethockeycoach.com. His web-based programs provide a step-by-step teaching model, with a library of video drills organized into instructional modules that can be accessed on any digital device.

Pitlick offers the following tips for adult players to get better at creating turnovers and regaining the puck as quickly as possible:

Practice the tenacious forecheck – It’s not always the most talented team that comes out on top, it’s the team that outworks the other one. The forecheck is where most turnovers take place, either in the offensive zone or when there’s a rink-wide pass. It’s about gaining quick proximity to the puck and winning battles, especially along the boards. If you get close enough to a player with the puck, try to lift his/her stick with your stick, steal the puck and skate away as fast as possible.

Keep your stick on the ice – You always want your stick blade in what you think is the passing lane, so your opponent has to pass over or around it. If you have good angles and anticipation and keep your stick down, there’s a good chance you’ll disrupt things.

Come back to the house – When your opponents have possession, regardless of what they’re doing on the exterior, you know that eventually they’ll be coming to the net. So, tighten everything there, make sure they have to skate, pass or shoot through bodies to get a good scoring chance. It’s important on defense to “gap up” so it’s tougher to enter the offensive zone and possess the puck.