Getting Better Behind the Bench

At the end of every season, hockey coaches send their players off with one key piece of advice: “Don’t forget to work hard and improve in the offseason.” As a result, players (hopefully) return for a new season with improved skills and a fresh outlook.

Shouldn’t coaches be doing the same?

The best coaches never stop studying. Coaching education should be a key component in any continuous effort to improve. Whether it’s your first 8U team or the United States Olympic squad, the learning should never end.

Darren Blue, assistant men’s hockey coach at NCAA Division I Minnesota State University in Mankato, Minn., has been a coaching education sponge as he’s ascended the ranks. A former player at Minnesota State, Blue progressed from a high school head-coaching job to the America West Hockey League (Tier III Junior) before joining the Mavericks 15 years ago. Through it all, his willingness to learn something new in the coaching game has never stopped.

“I’m kind of a junkie as far as picking up something new,” said Blue. “You want to stay not only up with the curve, but ahead of the curve of learning.

“We as coaches need to want to learn new things every year. Learn what’s new in how to teach skating skills, puck skills, using video. Whatever it is, know the way to teach it differently. Use all of that knowledge to help individuals improve each season. When you improve, they improve, and your team’s going to get better, too.”

Learning from Those Around You

One of the best ways to expand your knowledge is by simply talking to other coaches. Whether it’s discussing power-play strategy with Dan Bylsma at the upcoming 2014 National Hockey Coaches Symposium or asking your old squirt coach how to run a new shooting drill, sparking a conversation with other coaches will help your own abilities grow.

“When you go to a (coaching) clinic, the actual clinic is sometimes just a small part of the knowledge you gain from access to other coaches,” Blue said. “You get to spend time with others, evaluating and creating some great ideas.”

The conversations surrounding the clinics are just as valuable as the material in the classroom sessions. Even outside of coaching symposiums and clinics, taking the time to bounce ideas off other coaches you meet at the rink or elsewhere is another way to enhance your wealth of on- and off-ice knowledge.

You Can Always Teach an Old Dog New Tricks

Even iconic coaches are learning every day.

“One of the biggest things I have seen (in my years of coaching) is that the coaches who have been in the game for a long time continue to try and educate themselves,” Blue said, admitting he hopes to be a coach with a tenure as long as those he admires in the coaching industry. “You go to a college coaches convention and see Jack Parker (Boston University), Ron Mason (Michigan State University), or Red Berenson (University of Michigan), coaches who have been around for years, who are at every clinic.

“Those guys have spent a ton of time and have found a ton of success coaching. They are always the first ones there at 8 o’clock in the morning to listen to whatever speaker it was, just to try and stay ahead of the game and to try and stay current with the game. They pick up something new to bring back to their teams to be fresh and exciting as they come back to start the season.”

There’s no rock left unturned by USA Hockey’s Coaching Education Program. Nearly every question can be answered via clinics, symposiums or the surplus of information and resources available online.

“USA Hockey does a great job in creating avenues for coaches to learn new things and build on success that coaches are already having,” said Blue. “They just have a ton of information out there that’s very accessible to help coaches get better.”

USA Hockey’s Learning Center offers an abundance of knowledge from a multitude of coaches. The USA Hockey Mobile Coaching App puts everything at your fingertips.

Practice What You Preach

It’s important to set a good example for your players and staff.

“We ask our players to get better every day,” said Blue. “We ask them to work hard and to come back better than they were the day or season before.”

Coaches recognize the difference in players who care about improvement and those who don’t. The combination of coaches and players who are both willing to learn and improve will yield results.

“One of the things we say to our players all of the time is that every day, somebody’s getting better. Hopefully that’s you,” Blue said. “I think successful coaches look at it the same way. They ask, ‘how can I be better today and every day and come into a new year with new ideas and new ways to help individual players.’ In turn, that helps your team become better.” 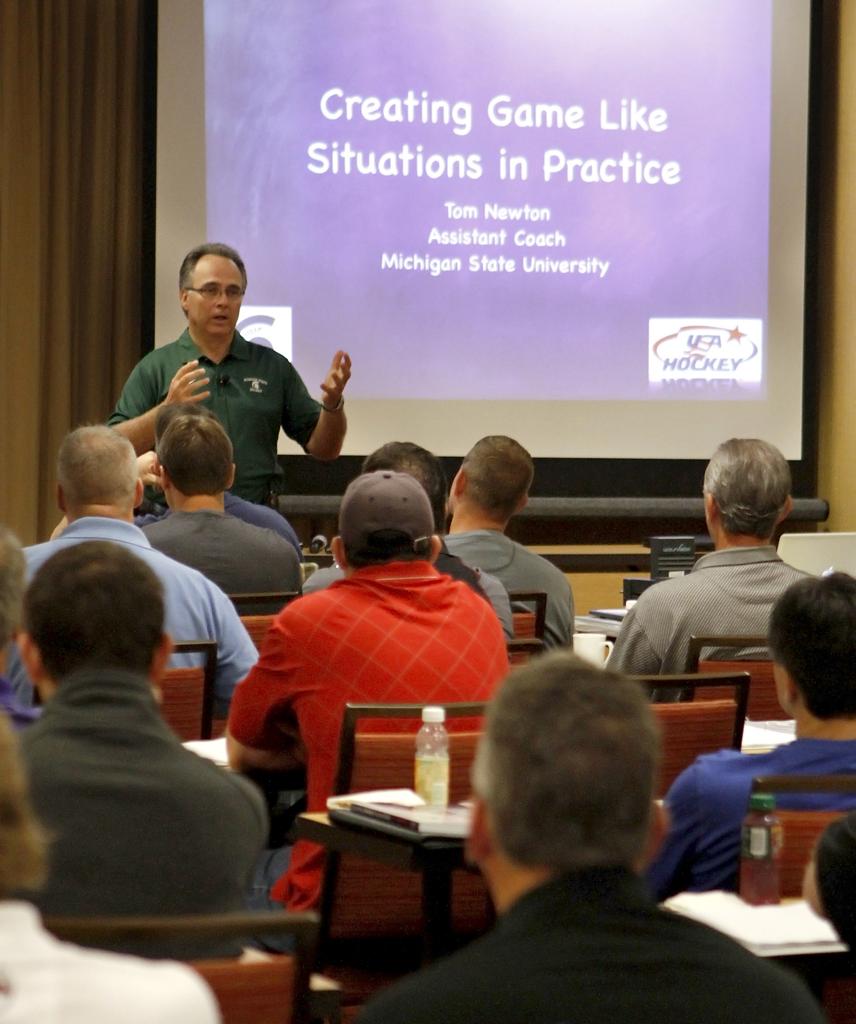