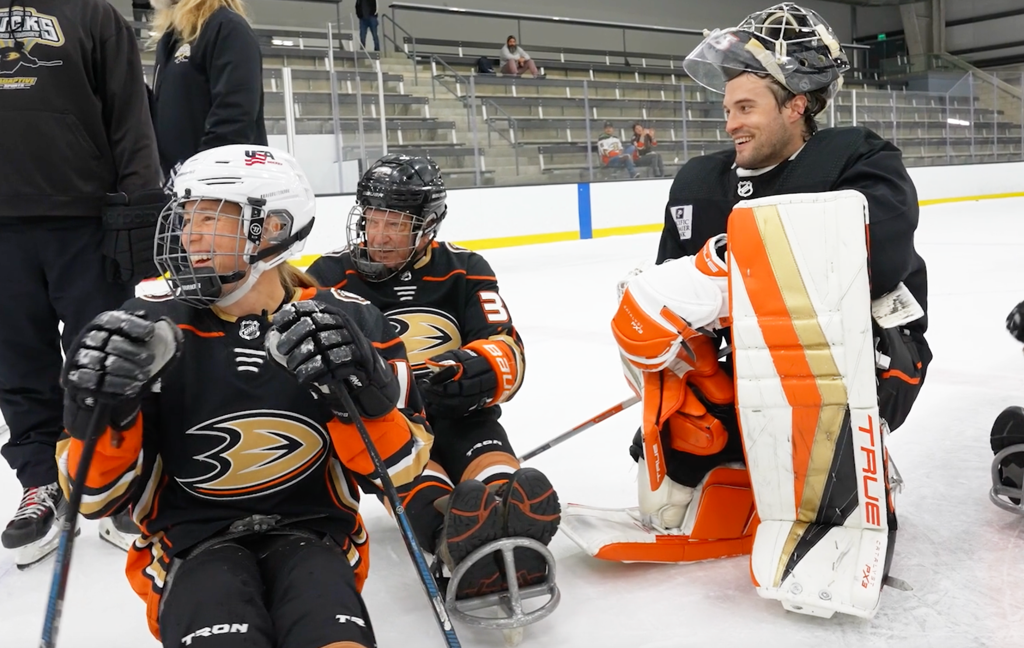 IRVINE, Calif. — The ear-to-ear smile said it all. Ethan Macias didn’t need to say anything, but the 7-year-old sled hockey player from San Diego did anyway.

“I’m so happy,” Ethan said more than 30 minutes after leaving the ice on an eventful Monday morning. “I’m so happy.”

Ethan was one of nearly two dozen players from the San Diego Ducks sled hockey team who enjoyed a morning of not only watching their NHL brethren Anaheim Ducks practice at Great Park Ice & FivePoint Arena, but they buckled into their sleds, strapped on their helmets and joined the action for about an hour mixed in with the pro players.

Sure, the fresh autograph on the brim of his Ducks hat from Anaheim goaltender John Gibson didn’t hurt, but the experience of Ethan and his sled hockey teammates — ranging in age from 7 to 66 — taking time off from school or work for this event created a lifetime of memories.

Monday’s joint practice was a prelude to the NHL’s Ducks hosting the 12th installment of the USA Hockey Sled Hockey Classic, presented by the NHL, from Thursday through Sunday at Great Park Ice featuring 23 teams in five divisions, all with ties to 16 different NHL franchises.

While the Sled Hockey Classic is all about competition, Monday celebrated the commonality of hockey, even with the distinct physical differences of the two sets of athletes. Following the NHL team’s workout, the sled players took to the ice with stick taps from the pros celebrating the moment.

After a few minutes of skating around, Anaheim coach Dallas Eakins pulled everyone over to the glass near one of the benches where he had his whiteboard ready to diagram a drill for the two teams to execute together. The players scattered to the two ends of the rink and NHLers mixed in with sled players to do a weave around cones, take a pass and shoot against the netminders from both teams. 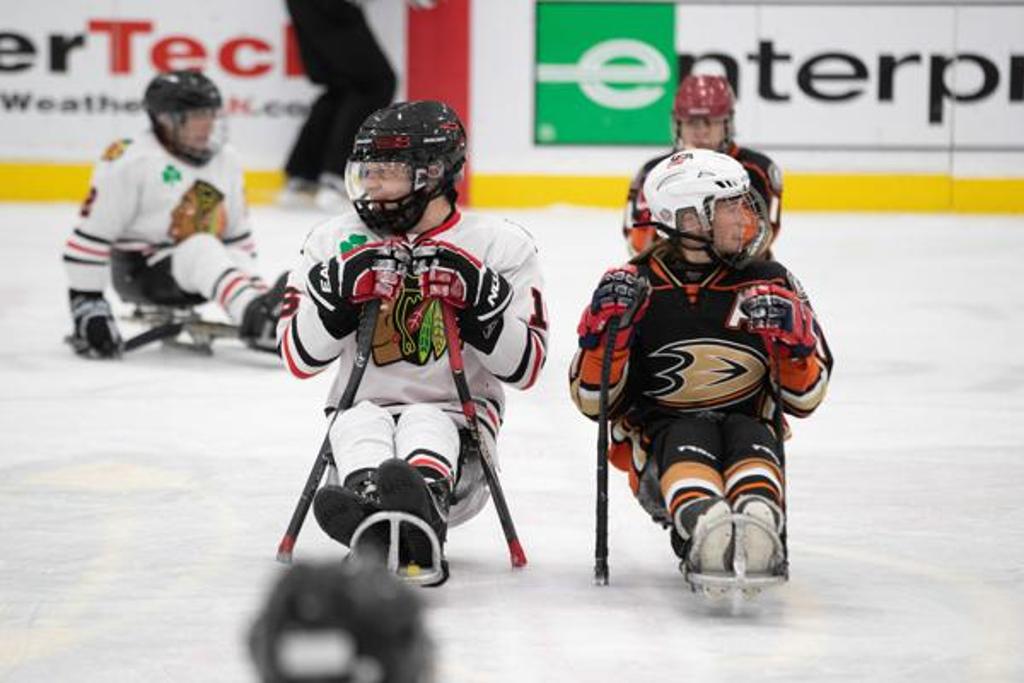 “It was absolutely amazing because I was able to just see the fruition of the dream that I had when I started the program,” said Sarah Bettencourt, a who helped the U.S. Women’s Development Sled Hockey Team capture first at the 2022 World Para Ice Hockey Women's World Challenge. “Just the fact that it has grown so much, and the Anaheim Ducks organization as a whole is so supportive. And all those players out there just were encouraging and uplifting and gave everything to our players and then our players were able to give it back and it just shows the power of that relationship and the fact that we all are all part of the Ducks family.”

As the sled Ducks marveled at the size, speed and technique of the NHLers, Anaheim players were curious as to how the San Diego athletes maneuvered their way around the ice and stickhandled the puck.

One of the NHL Ducks, defenseman Cam Fowler, had been wanting to see what hockey on a sled was like. The 6-foot-2 Fowler strapped in and gained a lot of perspective on the skill needed to get around the ice.

“I know some guys have done it before so I wanted to experience it, see what it was like and what they’re able to do,” said Fowler, who tipped over more than once. “It’s just incredible. Even just figuring out how to turn and stuff I was lost out there so they're amazing and what they’re capable of. It was really hard. I kind of was able to figure out my balance at some point, but then somebody threw me a puck and so I’m trying to push and stickhandle the puck. There was a lot going on.”

Gibson is a big supporter of sled hockey. A Pittsburgh native, Gibson became interested in sled hockey there and, along with wife Alexa, has worked with the San Diego Ducks for the past four years. Alexa even got into the action Monday by getting onto a sled for the first time.

“We just kind of try to do fundraisers to help them to travel for tournaments,” Gibson said. “One of the big things they wanted was just jerseys with their nameplates on the back. So just being able to help them out and get those little things for them. It was nice to be able to get back to them in different ways.”

Bettencourt was the first to hit the ice, but it wasn’t her first time being on the surface with NHL players. Along with Ducks teammate Aaron Loy, the pair dropped the ceremonial first puck before Saturday’s game against the Chicago Blackhawks at the Honda Center.

“What was cool is they weren't intimidated by it. They were challenged by it,” Bettencourt said. “‘OK, I see how he’s moving the puck. I’m going to do that. Now I want to go home and stickhandle.’ In fact, that’s what our youngest kid, Ethan, said. He was getting changed in the locker room and said, ‘Hockey’s my sport now. I’m gonna go ahead and I’m gonna stickhandle just like [Trevor] Zegras was doing out there.’ And that is what this is about. It’s about encouraging each other to up our game and to be the best version of ourselves both on and off the ice.”

Ethan has a favorite memory of Monday’s practice — and it came at Gibson’s expense.

“My best moment was actually getting to shoot on the goalie,” Ethan said. “And I shot one goal in. It was really, really fun.”