At the Pond Hockey Championships, Officials are Allowed to Have a Good Time Too

“USA Hockey just puts on a classy tournament to begin with, it’s so much fun,” said Thole, who worked his 12th straight pond hockey tournament this year. “Just to meet the officials from across the country and some of the guys that were back before and just talking about hockey from the different viewpoints of the referees. Just the whole atmosphere there, it’s just fun, whether (the temperature is) 20 above or 20 below.”

Thole isn’t alone in that feeling.

The officials who head to Dollar Lake in Eagle River generally don’t have to worry about getting pushback from pond hockey players. The guys all agree that those who compete in the event are there for fun and know how to act.

“It’s like a vacation, there’s no stress,” said Minnesota District Referee-in-Chief Steve Tatro, who has worked the last 13 Pond Hockey National Championships. “Ninety-nine percent of the players are out here for the right reasons, as it’s not the Stanley Cup. It’s to have some camaraderie and have a beer and play a little puck.” 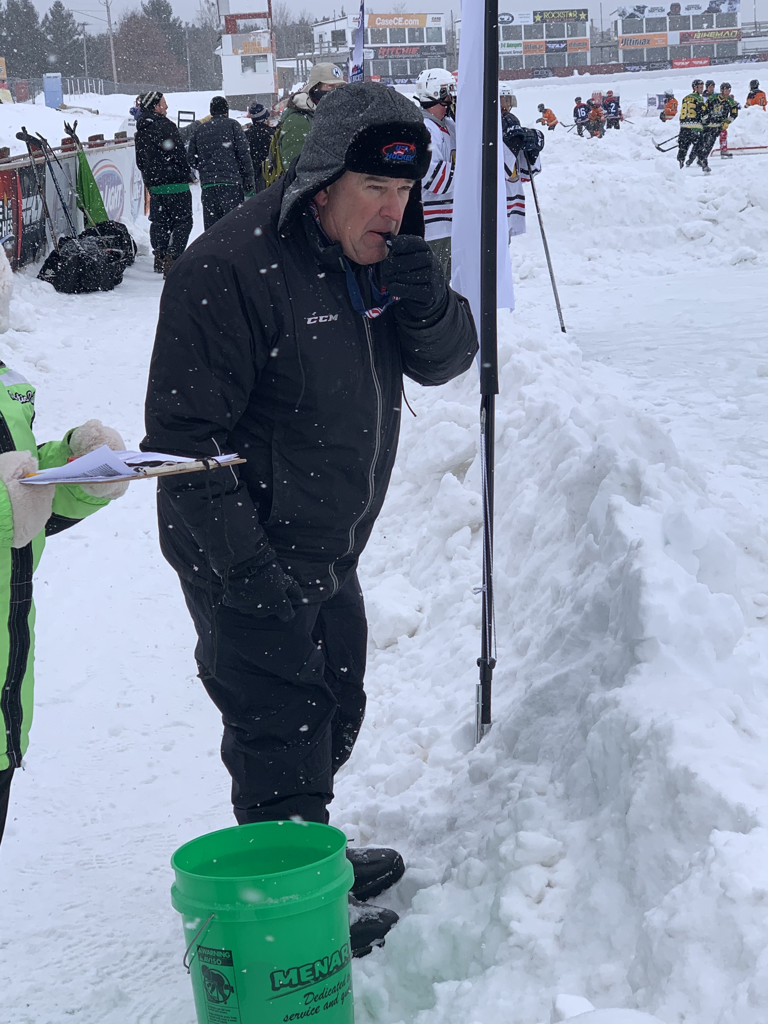 USA Hockey rounds up 20 officials — this year it was 10 from Minnesota and 10 from all over the rest of the country  — for the marquee event it hosts. Those guys are in charge of working more of the higher division games throughout the three days.

“It’s some retired referees that still want to get back to the game and feel that they still serve an integral part with USA Hockey, and they sure do,” Tatro said. “Everybody enjoys it when we’re out here having fun like this.”

The officials range in age from about 50 to 75 years old.

“That’s really the kind of experience that this kind of caters to,” USA Hockey Manager of the Officiating Education Program BJ Ringrose said. “It’s guys that have been officials for quite a while, they’re experienced in the game but at the same time, they’re old enough. They remember growing up and playing on the pond and they really get what this whole program is all about.”

San Diego native Dan Ellison traveled to pond hockey this year for the second time and loves officiating the event.

“I’ve been around hockey for a long, long time and there’s always been that romantic thought of getting out and being on a pond or a lake with hockey,” Ellison said. “It’s kind of tough growing up in San Diego, that experience isn’t readily available here. To go back and experience that and I think just the way the tournament is run and the way the players embrace it, it makes for sure an enjoyable experience.”

The officials working pond hockey know it’s a tournament that doesn’t require much intervention from them.

Organizers strive to provide a great experience for the players, so letting them play is a major emphasis.

Prior to every game, the on-ice official gathers players from both teams to go over the rules.

“Our main thing is to make sure it’s an enjoyable event for the participants, and if we need to step in and make a decision, that’s where it becomes not as enjoyable,” Tatro said.

The general pregame message is the same for every official.

Per Ringrose: “The best hockey games manage themselves. You should be able to play this together, it’s pond hockey and you guys know what this game’s all about. If I have to step in, guys are going to get upset. You guys will figure it out.”

Power plays don’t exist in pond hockey, so if a penalty is assessed, the non-offending team has a goal added to its score and it gets possession of the puck.

For the playoffs, one of the tiebreakers is goal differential. A team could miss out on advancing in the tournament if it gives up goals via penalties.

“When you explain that to them, the light bulb goes on and they go, ‘Oh, yeah, that’s right,’” Thole said.

Over his 12 years working the tournament, Thole knows what to look for when calling a game.

“My rule or emphasis is if the puck goes into the snowbanks, the first guy in digs it out, and you let them dig it out and play the puck,” Thole said. “What happens if you don’t, they go in there, and then all of a sudden they start shoving and pushing, and then somebody will crosscheck. I try to avoid that.”

Working his first pond hockey tournament in 2019, Ellison learned some valuable lessons he was able to implement this year.

“In 2019, what I did is just talk to the captains, but this time I talked to the full team,” Ellison said. “It was much better, because that way all the players hear the same message.”

During the three-day event, the officials have a busy schedule. They usually work three games and have an hour break. Then they work a few more games and get another break before finishing the day. It usually amounts to five to seven games per day.

A big reason the players come to pond hockey is for a chance to get away and bond with friends; the officials share that same camaraderie away from the lake.

The officials all stay in a lodge-type facility off Dollar Lake. On the night before the tournament starts, they gather in a community room to go over their plan of attack.

On Saturday night, they all assemble for dinner and one of the guys prepares a meal.

The officials share a lot of laughs when spending time together. They typically always request to come back for the following year’s tournament

“It’s not uncommon that basically six months out, they’ll be banging on my email inbox asking, ‘Are we coming back this year? What’s the plan? All that kind of stuff,” Ringrose said.

It’s a fraternity between the officials. They love to get away and share a bond on the pond.

“It’s nice to be here,” Tatro said. “It’s just a vacation from our regular grind.”