EAGLE RIVER, Wis. — On the eve of the opening day each year of the Labatt Blue/USA Hockey Pond Hockey Championships, Laura Koranda is always anxiously waiting.

As guests stream into Eagle Waters Resort, Koranda and her staff are ready to give out cookies and hugs.

Generally, the same pond hockey teams book their rooms each year at Eagle Waters Resort, so Koranda — who has owned the establishment for 20 years — welcomes in the people with open arms.

“It’s a like a big family, actually,” Koranda said. “Through the years we’ve found that we’ve got to know the teams and even some things about their families. It’s a like a family reunion every year pretty much.”

For four days each February, it is a massive extended family at Eagle Waters Resort.

One large group which primarily hails from Houston is always a staple to stay at resort. It has anywhere from 40 to 60 people.

“They come from Houston and Ohio and Chicago,” Koranda said. “They’re friends of friends that have skated and played and lived together in neighborhoods and moved away.”

The group always arrives at the resort on the Thursday before pond hockey and sticks around until the following Monday.

“They have their own little games that they play and championships,” Koranda said. “They go out on the ice after everybody’s gone and skate on Sunday.”

On Sunday night, Koranda hosts a big banquet for her Texas guests.

Koranda said during a typical pond hockey weekend, eight to 15 teams stay at her resort. Pond hockey players make up about 90 percent of Eagle Waters’ guests on that busy weekend.

Since most teams just keep coming back each year, they usually slap down their deposit for the following year when they check out.

“Most of them do re-book or they call within the week,” said Koranda, who is nearly completely booked up already for next February’s event.

It’s refreshing for Koranda to know that her resort is already filling up 12 months in advance.

With the same hockey players coming back year after year, Koranda tries to offer those at the resort some activities to keep them entertained during their stay.

“Some years we do like Winter Olympics, some years we’ve done toga parties, we’ve done Saran Wrap ballgames,” said Koranda, who also owns an Eagle River restaurant and bar. “We play bean bag toss. We try to do something different. … We just try to keep it interesting for them.”

Another favorite activity for the pond hockey goers is frequenting the resort’s bar. On the Friday of pond hockey, there are four bartenders staffed compared to just two on a regular weekend night.

Koranda figures she pulls in three times as much money on the Friday night of pond than a normal Friday night and twice as much on that Saturday. She tries to book a band for either one or both nights. This year, Koranda had live music on Friday.

“It gets pretty crazy,” said Eagle Waters bartender Tony Pudlo about the weekend of pond hockey. “Between people coming from out of town for dinners, people from other teams coming in to check out the place, have drinks, relax. We do have a lot of people that stay at the resort, they come over just because it’s pretty convenient for them.”

Pudlo, who is an Eagle River native, worked full-time at Eagle Waters for five years before moving out of town. The last four years, Pudlo has come back to work at the resort’s bar during pond hockey weekend.

He’s built some strong relationships with some of his longtime customers.

“You definitely kind of get a real close friendship and a kind of family feel,” said Pudlo, who used to play for the popular hometown amateur team, the Eagle River Falcons. “You always feel like you’re a part of the group even if you do have that bar between you and you’re taught to be that professional worker, you’re still one of the guys out there.”

Pudlo started heading out to the pond hockey tournament on Dollar Lake one of the first years to score and referee games. Over the years, he’s gotten to know some of the players well and now goes out to the rinks to watch his friends compete.

“It’s a lot of fun because you get to know them and depending on how good you get to know these guys, some of them I will try to stay in contact with outside of pond hockey,” Pudlo said. “Sometimes if they’re still alive and still going and don’t play too early [the next day], it’s fun to go hang out with them after you are done with your job.”

“It’s always kind of a hug fest during check in,” Koranda said. “There seems to be a really genuine appreciation of what we offer here not only at Eagle Waters but the Eagle River community as a whole. They’re always so appreciative of the things that we do in the community.” 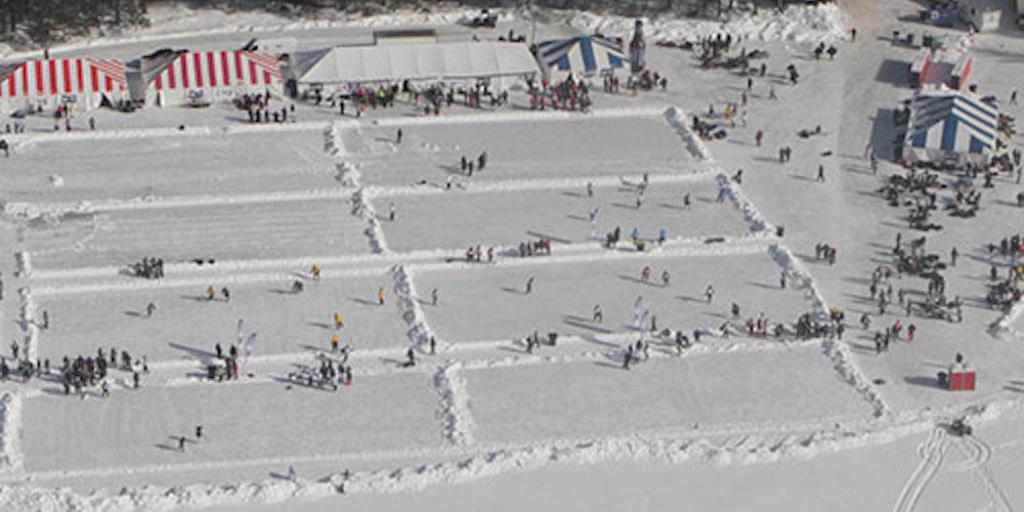