At least that seems to be the case for a group of alumni from the University of Richmond’s American Collegiate Hockey Association (ACHA) men’s teams.

With their collegiate playing days behind them, numerous alumni from various years and teams at Richmond continue to reunite as a team in USA Hockey adult tournaments across the United States.

“We have guys from all different [graduation] years,” offered Justin Collins, a 2008 Richmond graduate, current management consultant and often one of the team organizers for tournaments. “It’s an entire alumni network.” 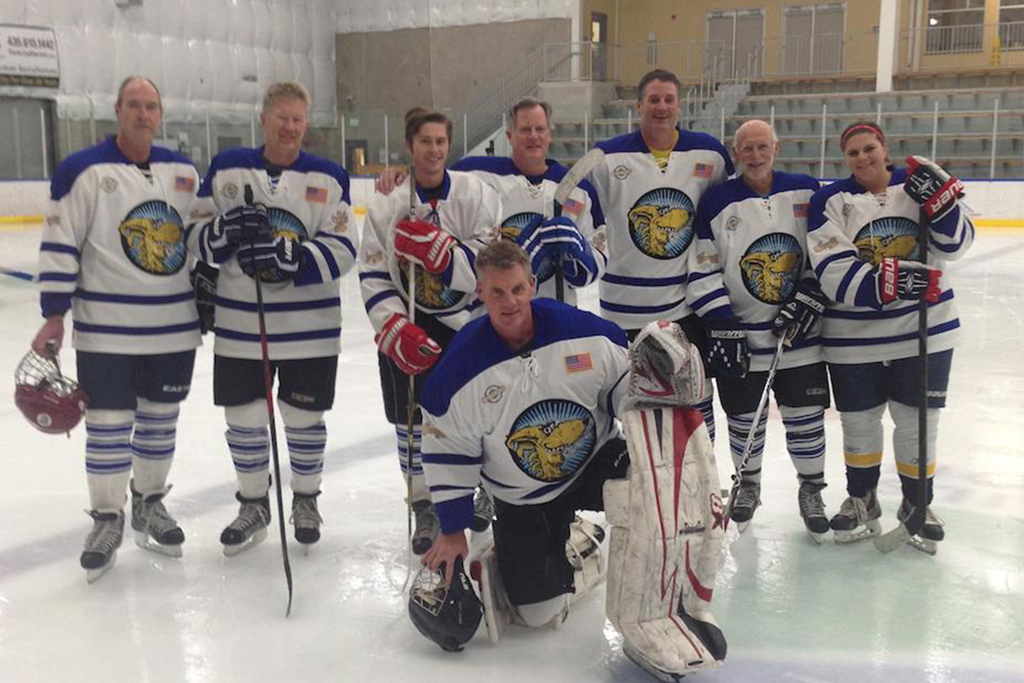 Tom Occhino, the coach of Richmond’s initial team in 2001 is, according to Collins, the “brainpower” behind these tournament reunions.

“I was there for seven years and I understand how much alumni participation is important and I started an alumni weekend for the hockey guys,” explained Occhino. “The guys would say they really missed everybody.”

Occhino also heard the former players lament the fact they never had the opportunity to play with certain alumni during their playing days due to the age differences and the timeframe of when players may have been attending Richmond.

“Maybe if all the best guys ever got together it would be fun,” Occhino thought.

Thought became a reality when in 2012 a small group of alumni created a team and played in a USA Hockey event in Las Vegas.

Mix a taste of success — the team won the tournament — with an enjoyable experience and suddenly word of mouth spread to other alumni, and everyone wanted to be a part of it.

“There is a core of guys that pretty much always go, and we have been to Vegas for eight years and now we’ve been to Nashville for four years,” said Occhino.

The team of former Richmond players has captured the tournament title four times in Las Vegas and has hoisted the championship banner in Nashville twice.

“We’re always disappointed if we are not playing in that championship game on Sunday,” said Collins.

In their most recent fall tournament in Nashville, the team included alumni from the 2001 team and a skater from the class of 2018.

“It was pretty amazing to have guys from the first-year team and last year’s team playing together. It was really great,” said Occhino.

The tournament reunions are popular among former players and managing the roster is part of the challenge as, according to Collins, “We try to keep it to 12 or 13 skaters with a goalie. We have a lot of guys that want to come so we must manage that as well. It is definitely a very popular event twice a year.”

Although Richmond alumni players are scattered across the United States, have successful careers and established families, the opportunity to reunite with Spiders hockey players is something many cannot pass up.

“They had a great time playing college hockey and are very good friends. Guys like to get together and share old stories,” said Occhino. “They are playing hockey and trying to win. The competition is up a little notch from a standard Wednesday night beer league game.”

“In college, that culture of being 100% willing to commit to this group of guys and experiences like a 10-hour bus ride to Atlanta brought us all together. It’s our chance to have a mini-reunion,” said Collins. “We still rent one big van altogether, jump in a hotel room together and it is like reliving the glory days.”

Matt Improta was president of the club in 2009 and 2010 prior to graduating and has participated in all but one of the team’s tournament appearances.

“It’s an opportunity to see a bunch of guys you used to see every day during one of the greatest times of your life,” said Improta, who now works in investment banking in Nashville. “As you get older, those opportunities to build camaraderie like that don’t occur so this is an opportunity to step into the room and kind of pick up all those same jokes and messing around with the guys that you did 10, 15 or 20 years ago. It’s a bond you build with these people over the years.

“It’s an opportunity twice a year that I probably won’t miss [out on] ever.”

Occhino lives in his hometown of Buffalo, New York, and after a 13-year ACHA coaching career that included time behind the bench at Fredonia and Canisius is coaching youth hockey when not arranging Richmond alumni tournament participation.

“I love hockey,” he said. “It is a great sport and there is really nothing like being around your teammates. That is why I have my 6-year-old daughter playing. It is great for building life lessons.”