When Andrea Tan gets out onto the ice with first-time skaters, the reactions she hears are always priceless.

“One of my favorite quotes was, ‘I’ve been waiting all my life to play hockey!’” said Tan. “Many are very excited to sign up and start their hockey careers.”

The Northern California Women’s Hockey League (NCWHL) is one of many adult hockey organizations nationwide that are taking part in USA Hockey’s Adult First Goal Program.

First Goal is a grant-based free program that provides USA Hockey-registered adult hockey leagues with resources to introduce new adults to the sport.

One of the big barriers for adults trying hockey is the expense of buying equipment. Through First Goal, leagues that qualify for the program are giving equipment to allow players to try out the sport.

“The Adult First Goal Program was essentially designed to outfit first-time players with equipment so that they could try hockey for free, especially without the commitment of having to purchase equipment, try to find it to borrow or whatnot,” said Katie Holmgren, USA Hockey director of program services.

“Hockey is an expensive sport,” said Tan, who is a division coordinator for the NCWHL. “League fees are expensive and then you have to get gear. The gear from the First Goal Program goes to help the financial impact of it all at once. We also offer a sizable discount for new skaters registering for our league.”

When the NCWHL got involved with AFG five years ago, it received a large shipment of equipment from USA Hockey, including sticks, helmets, shin guards, elbow pads and gloves.

USA Hockey isn’t just handing out equipment to organizations taking part in the program and then telling them good luck. It provides other valuable resources to the leagues.

“We want to really provide the foundation for adult leagues to have successful events and grow their lower levels, because quite frankly the biggest population of adult hockey players is the people who started playing it as adults,” Holmgren said. “We wanted to make it accessible for everyone, not just kids.”

USA Hockey gives organizations ideas on who and where the ideal markets are to hit as well as sample emails to send out.

“‘Have you ever wanted to try hockey? Here’s the date we’re doing it,’” Holmgren said. 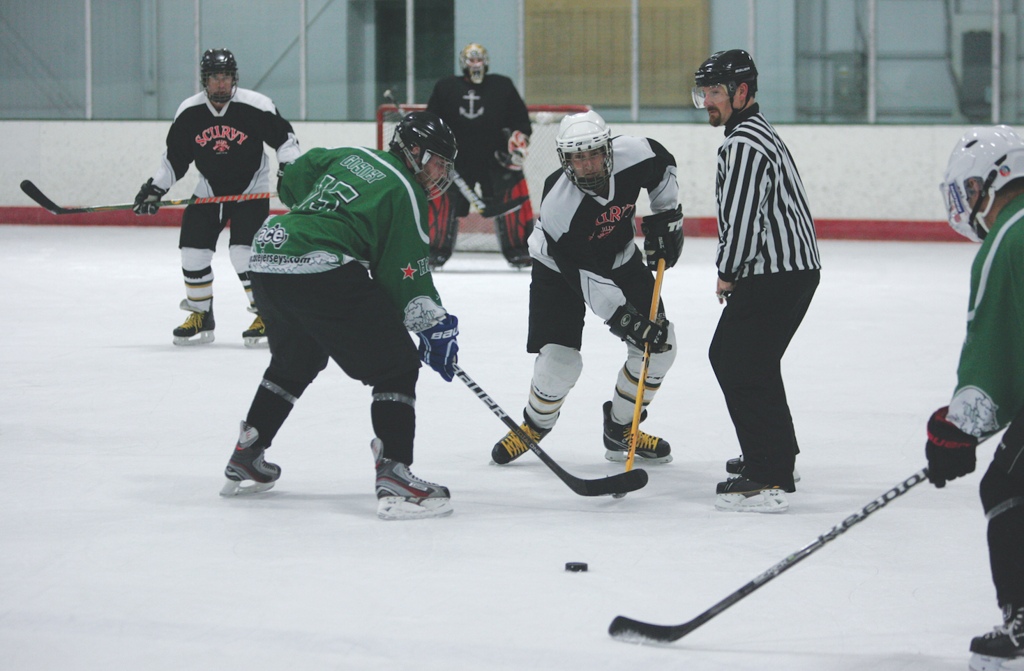 The NCWHL — which runs out of the Nazareth Ice Oasis in Redwood City and San Mateo, California — holds Give Hockey a Try Day (GHATD) to attract adult skaters to the rink. The league has two sessions per year, one each season. It spans two ice slots, so the event lasts around three hours. The women go through drills in the first half of the session, then scrimmage at the end.

“GHATD is a very popular event, every session is full and has a waiting list,” Tan said. “Usually 30-40 people sign up to try hockey.”

Holmgren said the most common approach for leagues that are involved with the Adult First Goal Program is having the players skate in a Try Hockey for Free event and then they have the option of signing up for a learn-to-play continuation session or go right into league action.

The NCWHL, which has four divisions, places first-time skaters into the Green division where 40 percent of the ice slots are practices and 60 percent are games.

For each sold-out GHATD event with about 40 players in each session, roughly 10 to 15 sign up for a league after a great first-time experience on the ice, Tan said.

In a non-traditional hockey market such as California, getting players to try hockey can be a challenge. However, the NCWHL has always attracted plenty of women skaters through various means.

“Many women want to get out and be active,” Tan said. “Ours is a very welcoming league and also a teaching league. Our Green divisions have coached practices, and both Green and Red divisions have bench coaches.”

Tan constantly hears positive feedback from players about their first-time experience with hockey. Those comments always trickle back to USA Hockey headquarters in Colorado Springs, Colorado, where Holmgren loves to hear that the First Goal Program is going strong.

“It’s honestly probably the most fun part of my job is helping run those events locally,” Holmgren said. “Getting adults to try hockey is something a little different. Typically, it’s a kid might have a parent that wants to take him to it to give him a shot vs. these people want to try it for themselves. It’s nothing but smiles.”