When life has thrown Bob Davidson a cross check, he has always gotten back up even stronger.

A big reason why he has battled and conquered meningitis and cancer twice is because he knows hockey and his teammates will lift his spirits.

“They’re my brothers in arms,” Davidson said. “They back me up.”

Davidson never drags his life struggles onto the ice. The 58-year-old captain of the Iceholes adult hockey team out of the Fox Valley Ice Arena Adult Hockey League in Geneva, Illinois, is always business as usual.

The dentist by day learned some tough news in spring 2015.

“He walked into the locker room like normal and said, ‘By the way, guys, I just wanted to let you know, I’ve got cancer,’” Iceholes teammate Mike Arend said. “Everybody in there just dropped their mouth. He was just so straightforward with it and said, ‘Here it is and we’re going to deal with it and go.’”

Davidson, who beat spinal meningitis in the mid-2000s, went to the doctor in 2015 with a few concerns. He was tested for prostate cancer and his Gleason score registered nine out of 10, meaning cancer was very aggressive. Fortunately, it was caught early.

“The doctor said, ‘It’s a pretty bad case. We can try working around it, but it’s going to be a surgical case,’” Davidson said. “Next thing you know, I had time and now it’s here. ‘Two weeks, we want to you here,’ and let’s do it.”

Davidson went to Northwestern Memorial Hospital in Chicago and had his prostate removed by one of the top doctors in the country.

Treatments for the next number of months knocked Davidson down, but he kept working at his dental practice. He missed the fall hockey season, but returned for the winter session to play alongside his Iceholes teammates.

Davidson — who is called by ‘Doc’ to most people who know him — played shorter shifts on the ice but never complained about his situation.

“It would slow him down a little bit, but he was always ready, willing and able to play hockey — he never missed any of that,” longtime Iceholes teammate and friend Don Breivik said. “It would slow him as far as just things getting done around the house and activities and whatnot. Kind of having to step aside and not partake a lot of things, but not miss hockey.”

Davidson has played hockey for 50 years, and he wasn’t going to let cancer rob him of his weekly fun.

“Something to take your frustrations out,” said Davidson about playing hockey. “Leave that whole cancer world and the worry aside. Your buddies, your comrades, they’re all cheering for you. It’s nice to see a familiar face and have a beer afterward.”

By November 2015, Davidson was cancer-free.

Davidson’s doctor told him there was always a chance the cancer could return, so he had to have bloodwork done every three months. Davidson skated without issue for two-and-a-half years before getting blood tests back in April of this year that showed a trace amount of cancer was detected.

“They got the bloodwork back, called me and said, ‘We’ve got bad news, your cancer is back,’” Davidson said. “‘What?’ It just floored me. I’ve got no symptoms. I feel great.”

Davidson underwent scans of his entire body, but doctors couldn’t find where it was showing up. Doctors figured it was at the root of the prostate that was still there from his surgery years earlier.

For five days a week from August to October, Davidson went through 43 treatments of radiation, all the while still lacing up his skates every week for adult league. It wasn’t until the last treatment that the radiation knocked him down.

“The next day I could barely get out of bed,” Davidson said. “Going to work was just horrible and it just kept getting worse.”

Again, Davidson had the unwavering support from his teammates as well as his team’s opponents, ice rink staff and referees.

“He has a support system like crazy,” Breivik said. “Wherever he goes, people ask him how he’s doing and letting him know if he needs anything give them a call. It’s fantastic.”

Battling cancer for Round 2, Arend never saw his friend struggle to get the energy up to play hockey.

“If he was tired or slow, the worst thing that you may have had to help out with was picking up beer before going to the rink so that he didn’t have to do it,” Arend said.

“He comes to the rink and everybody knows what he’s been going through, but they don’t give him any breaks,” Breivik said. “He’s giving them a hard time, razzing them and dishing it out just as much as taking it. He comes to hockey, and that’s what he looks forward to.”

Davidson received good news on Dec. 12: the cancer had vanished. During his weekly email to his teammates, Davidson always keeps his teammates informed of what’s going on with the team.

“He came out in the same email: ‘No. 1, our game is Tuesday. No. 2, I’m cancer free,’” Breivik said. “Everybody responded back, ‘Congratulations.’

“[Cancer is] always an afterthought with him. He’ll bring it up once, but you don’t hear much about it after that. He keeps it to himself.”

Davidson is back skating freely without a care in the world. It’s Davidson 2, Cancer 0.

And all along, hockey was the root of keeping him fighting for his life. Davidson will do what he can to ward off cancer a third time. 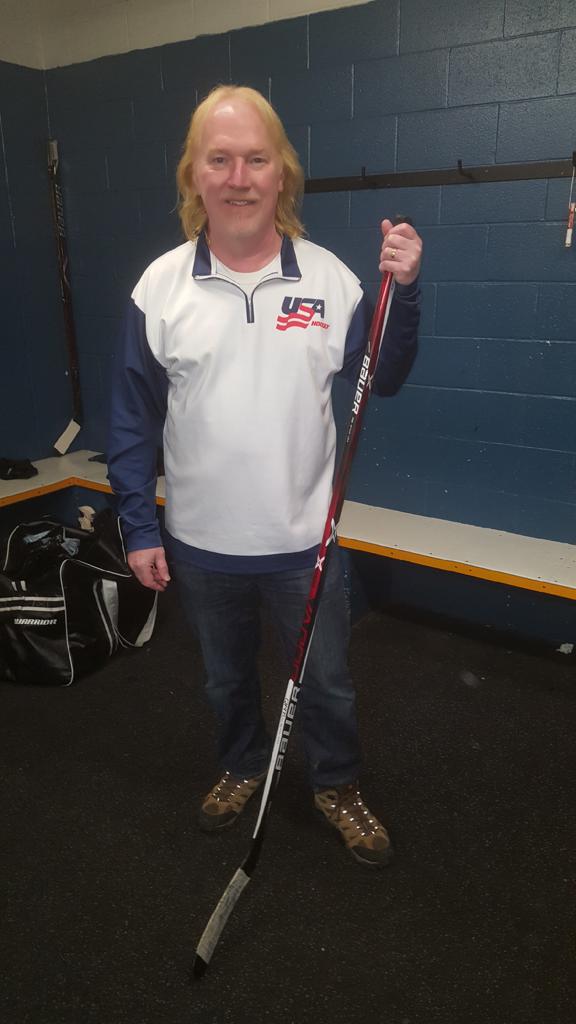 Bob Davidson paused for a photo in the locker room