The many roles of District Director David Braunstein 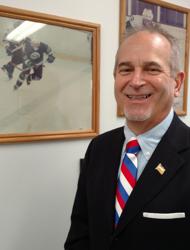 In addition to his duties as a district director, Braunstein is currently West Section president of the New York State Amateur Hockey Association as well as a member of the USA Hockey Adult Council.

A lifelong western New Yorker, Braunstein lives in the Buffalo suburb of Kenmore with his wife, Dianne. When he’s not at the rink, Braunstein serves as senior vice president of investments for Saperston Asset Management Inc.

Now that he’s got more than 30 years of hockey – which includes a number of playing, coaching and leadership positions – under his belt, we wanted to ask Braunstein a little about his love for the sport, adult hockey’s current and future state of affairs, and why he continues to pour himself into it.

USA Hockey: What is it about hockey that drew you to the sport?

David Braunstein: Originally, my goal was to just get out a couple times a week and exercise. What kept me in as a player was the idea of being part of a team. And, of course, going out after games and rehashing the “almosts.”

USA Hockey: Why did you get involved on the coaching and administrative side of hockey?

Braunstein: As a coach, I wanted to help kids improve, give them something to do, and try to teach them how to be good citizens. I wanted to be a role model and hopefully give something back to the game. Now, as an administrator, I want to help give our youth an alternative to electronics and to teach life lessons in a safe environment.

USA Hockey: What are your favorite hockey memories?

Braunstein: Well, there are too many to list, but they all revolve around seeing or hearing from former players, who share with me the lessons they learned, how playing hockey helped them get through tough times, and how they have tried to pass those lessons on to others.

USA Hockey: Why is serving on the USA Hockey Adult Council important to you?

Braunstein: As a former adult player, and now an administrator, I felt I had something to give back in hopes of making our game better. I’m not sure if I’ve succeeded, but I’ll keep trying. It’s important to me because, as administrators, we all have the responsibility to make our sport as safe and fun as possible.

USA Hockey: Is there anything specific you’d like to accomplish as a member of the Adult Council?

Braunstein: I’d like to see that all adult hockey players in the United States play in USA Hockey leagues.

USA Hockey: How would you evaluate the strength and health of adult hockey in New York?

Braunstein: Adult hockey is strong and healthy here, but the numbers could always be stronger. There are several rinks and leagues that don’t belong to USA Hockey and I’d like to be able to welcome those non-members to join the USA Hockey family. I think women’s hockey has tremendous potential, so I’d also like to see more adult female players and leagues in New York.

USA Hockey: How about the overall picture of adult hockey across the country?

Braunstein: Under former Adult Council Chair John Beadle's leadership, with tremendous support from Adult Council staff and the USA Hockey board of directors, adult hockey has grown at a rapid pace. It’s a combination of utilizing electronic registration, the growth of the American Collegiate Hockey Association (ACHA), and the tremendous amount of work and effort from numerous volunteer Adult Council members running numerous events and tournaments throughout the country. The Adult Council has attempted and succeeded in making adult hockey fun. If it wasn’t fun, we wouldn’t see the growth that we have.