Putting the coaching opportunity in a broader perspective

USA Hockey continues to use innovative ways to connect coaches to education and resources for the development of young players.

First, USAHockey.com has information about the American Development Model (ADM) and a cornucopia of tools for age-specific practices. The USA Hockey Mobile Coach app puts these tools in the palm of your hand, allowing coaches to build practice plans and track activity and progress of players on their smartphones and mobile devices.

As we begin a new season, USA Hockey National Coach-In-Chief Mike MacMillan wants bench bosses at all levels to be connected – to the idea of age-appropriate development. Coaches must emphasize long-term player development and setting players up with the tools to succeed not only this season, but beyond.

“Connecting coaches to think about long-term development is crucial,” MacMillan said. “If coaches don’t understand long-term athlete development, don’t understand those different stages, it’s going to stunt our athletes. If you have a 10-and-Under coach who is trying to run 14-year-old practices, that 10-year-old is going to miss out on important skill acquisitions for his age group.

“It behooves coaches to understand there are different stages of development, and we do all we can to make sure the coaches have that information to use with the ages that they’re coaching.”

Symposiums inspire coaches to get on the same page

Recently, USA Hockey helped host a number of events to connect at all levels throughout the country. Events like the National Hockey Coaches Symposium (Level 5) in Lake Placid, New York, the Minnesota Hockey and Pacific District Directors Conference and the Bruins Academy Coaching Symposium in Boston are opportunities for coaching development and education.

“The age-specific stuff is important, but also, what is it to be a coach? There’s an art to it. What traits, principles and skill development knowledge does that coach need as he or she’s going through their coaching education?” MacMillan asked. “We’re teaching all of that, and the symposiums are a way to get coaches on the same page with the understanding that you need age-specific practice and development no matter what age you’re coaching.”

Many of these events are attended not only by youth instructors, but college and pro hockey thought leaders.

"Hockey really needs to be thought about, in terms of player development, as 8U through pros," Majka said. “When coaches are connected at all levels, it creates continuity and a logical continuum for development. It also sets expectations for both players and parents as they progress through a coordinated program.”

Lessons from the top transcend age

NHL clubs are involved in a number of community outreach programs that are intended to grow youngsters’ passion, development and experience with the game.

“When you listen to the NHL coaches talk at the USA Hockey Level 5 symposiums, as an example, a lot of what they say transcends to that younger age group,” MacMillan said.

College and pro coaches often give back to the community and attend youth practices or speak at coaching events. USA Hockey partners with coaches at all levels to help all youth hockey coaches better understand long-term development.

Take advantage of these opportunities. Hear from the best talk about long-term development. Embracing the big picture is critical to maximizing development.

“We’ve gotten better when more NHL coaches have gotten involved in the coaching program, gotten more involved in the ADM. We’re better when the college coaches get involved. It sends a very strong message,” MacMillan said. “If they can see what’s going on with the Penguins and coach Mike Sullivan, what’s going on with the Tampa Bay Lightning and Jon Cooper, and say, ‘Geez, these guys are playing small-area games and working on skill development,’ Why wouldn’t you do that at 10U?” 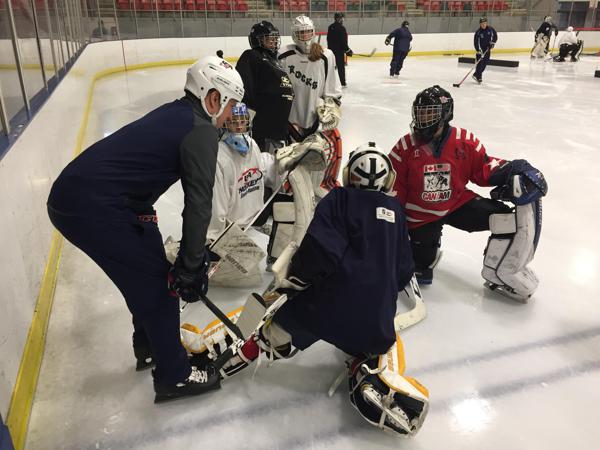