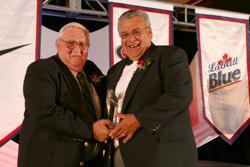 For decades, Don Mulder has helped increase the number of adult players in the USA Hockey family while playing a vital role in the expansion of both men’s and women’s national tournaments. He’s also a past president of the Wisconsin Amateur Hockey Association and the Wisconsin Hockey Hall of Fame, into which he was inducted in 1998. He currently lives in Fond du Lac, Wisconsin, with his wife, Judy. The couple has five children and 14 grandchildren.

Earlier this year, Mulder was elected chairperson and vice president of USA Hockey’s Adult Council, which supervises, steers and helps administer all events and programs within USA Hockey’s adult hockey department. His election gave us the perfect opportunity to chat about Adult Council and the growing popularity of adult hockey, which now includes more than 179,000 players across the country.

USA Hockey: What are your goals as chairperson and vice president of the Adult Council?

Don Mulder: As chairperson, I want the council to be able to continue and build upon growth and retention initiatives through new and existing programming. This allows us to provide the best possible experience for adult players, by connecting them to the game at every level and promoting a lifelong love of the sport.

USA Hockey: What can we do to grow the game at the adult level? How far have we come, and how far can we go?

Mulder: We offer many opportunities for USA Hockey members to participate with their current teams. For those wanting to learn to play hockey, we have the Adult First Goal Program, which helps provide gear for new players to get started through their local adult leagues.

USA Hockey: You’ve been a member of the Adult Council for more than 20 years. What does adult hockey mean to the sport as a whole?

Mulder: The adult hockey program makes up more than 30 percent of USA Hockey, and it’s the largest adult membership program in the world. With that, we’ve created an adult hockey family around the country, bringing together male and female players from 18 to 70 years old – all with an incredible passion for the game.

USA Hockey: You’re pretty involved in the Labatt Blue USA Hockey Pond Hockey National Championships every year. Why is this event so special?

Mulder: The USA Hockey Pond Hockey National Championships, held in Eagle River, Wisconsin, is one of the most special and unique events that USA Hockey operates for its adult members. The only way to explain it is to be a part of it. Eagle River embodies camaraderie, the great outdoors, and showcases the game as it was originally played.