Sometimes, it is about so much more than just hockey, although the game is enough of an incentive by itself.

It is the 2018 USA Hockey Warrior Classic, presented by Terry Fator, which took place at City National Arena in Las Vegas this past weekend. Held for the third time since making its debut in 2016-17, the event centers around USA Hockey’s newest and quickest-growing disabled hockey discipline, warrior hockey.

Dedicated to U.S. military veterans with a disability who also play ice hockey, warrior hockey is regular stand-up hockey played under USA Hockey adult, non-checking rules. To be eligible, players must be or have been Veterans and Members of the Armed Forces and meet a minimum disability rating.

Typically a four-team event, this year saw a record seven teams and over 100 players from across the country compete in action that began on Friday and ran through to the tournament’s two championship games on Sunday.

Another new twist to this year’s event? Presenting sponsor Terry Fator, the Las Vegas-based comedian, singer and celebrity impressionist who became a household name in 2007 when he won Season 2 of “America’s Got Talent” with his unique brand of entertainment.

A longtime supporter of various military charities whose passion for hockey dates back to his time with Dallas Stars in the early 1990’s, Fator saw the opportunity to sponsor the USA Hockey Warrior Classic as a perfect fit. 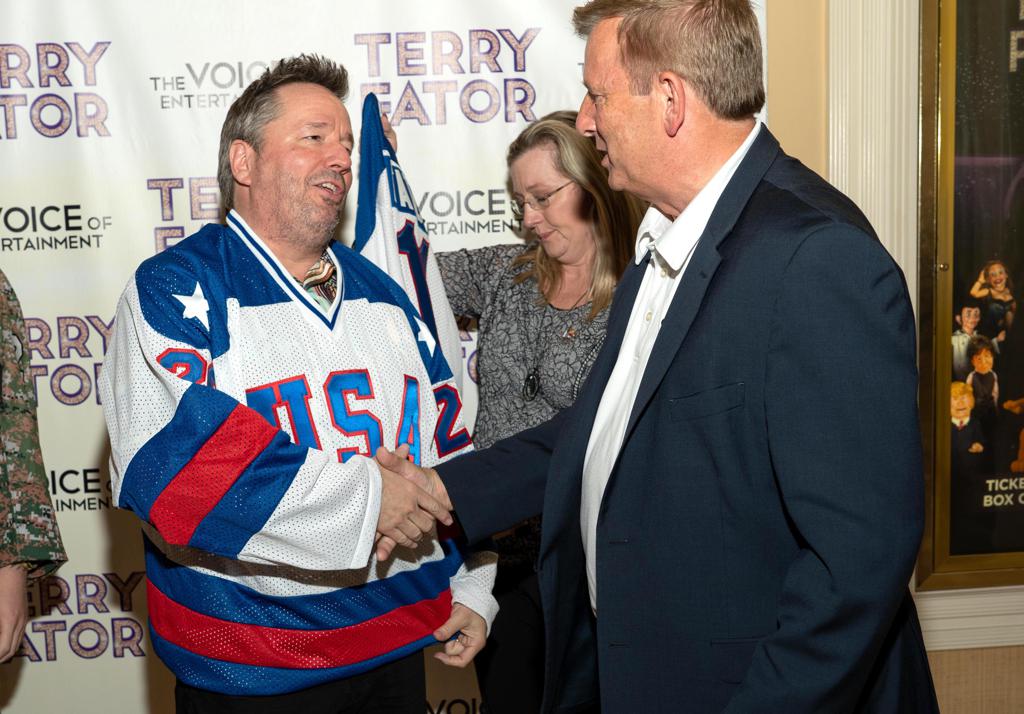 USA Hockey president Jim Smith presents Terry Fator with a custom USA Hockey jersey to kick off the festivities at the 2018 Warrior Classic.

“We’ve been supporters of the military our entire lives and it’s wonderful to be able to do this,” said Fator, whose service to the military resulted in him earning the 2017 Bob Hope Award. “We just want our military to feel appreciated, to let them know that us back home are genuinely and profoundly appreciative of the sacrifices they make for our country, families and our families, as well.”

In and around the rink throughout the weekend, Fator sang the National Anthem, dropped the puck in a ceremonial faceoff, served as an honorary coach for the Chicago Blackhawks Warriors and even spent time with the 2018-19 U.S. National Sled Hockey Team – which boasts seven military veterans – that was also in town practicing.

To say Fator’s involvement was well-received by players, families and fans associated with the event would be an understatement.

“It’s amazing, Terry Fator has just stepped up,” said Michael Vaccaro, both a warrior hockey player and representative within USA Hockey’s warrior hockey discipline. “Every time we came to the rink, we saw him here and involved. He invited us to his show on Thursday and we had a social evening with him. He’s just brought so much excitement and enthusiasm to help the veterans out, it’s just great to see that.”

While the event’s festivities may have brought excitement to those involved, perhaps Fator’s favorite aspect of the weekend was the ability to interact with the players and veterans on a personal level. To hear their stories and then see their excitement scoring a goal or celebrating a win, illustrated the very reason he became involved in the event.

“It’s incredibly important to be involved,” said Fator. “My show is a very uplifting experience. We like to lift the human spirit and I think something like this (event) is the best way to do that. To take people who might be down or feeling bad and give them the chance to compete and really just feel like they’re doing something fun and have a purpose in life.”

The misconception about warrior hockey, and the event itself, is that these players are simply military veterans. The truth of the matter is these players have not only served our country, but have been diagnosed with a disability and find joy or normalcy in playing hockey.

“A lot of people come out and they say, ‘Oh look, it’s a military team,’ but we are all veterans and we are all disabled,” said Vaccaro, 56, who received a traumatic brain injury himself while on patrol in Ramadi, Iraq, in 2006, during his 10 years of active duty in the Marine Corps. “The average person thinks ‘disabled,’ you think of somebody in a wheelchair, but it’s not that way, especially with PTSD and some other traumatic brain injuries that some of our players have, what we like to call ‘invisible wounds.’ There’s a lot of veterans that haven’t been in combat that are disabled as well. So we have a wide variety of people from all the branches of the military.”

The disabled veterans who play warrior hockey relish the love for the competition, the camaraderie with fellow military personnel (both current and former) going through similar experiences and a need for a healing activity. The aspect of being a member of a team is very appealing to veterans, because it reminds them of their time serving in the military. 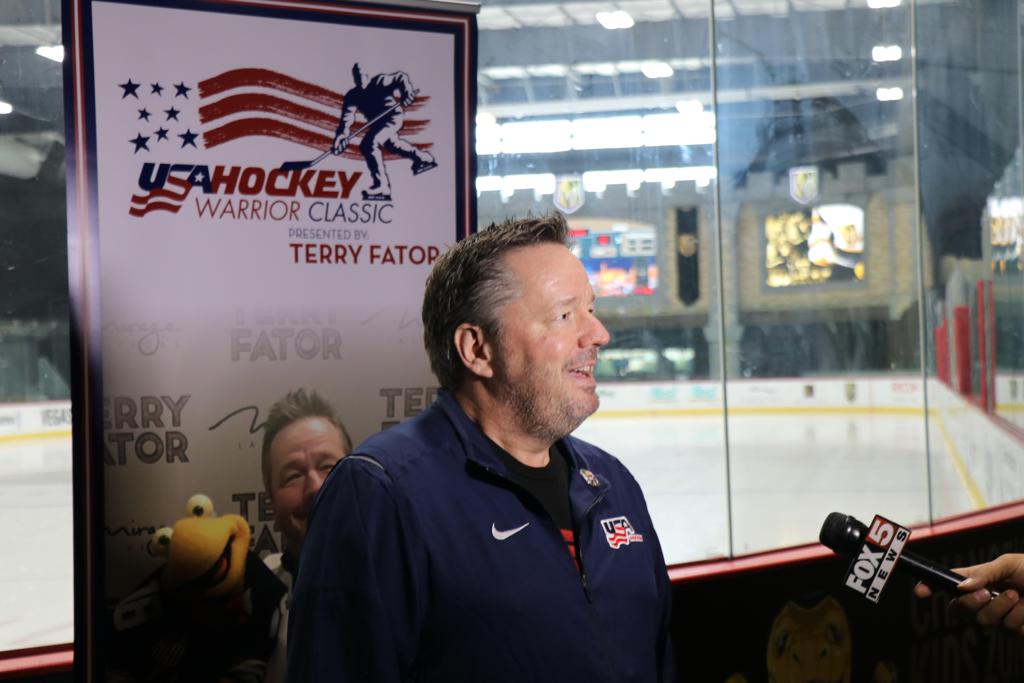 “The veterans join these teams because they sort of feel like they’re in a unit, because in the military, you have that cohesion,” Vaccaro said. “Everybody’s got your back, you have to do a certain, specific mission or else the other guy could get hurt, so now, hockey, you play your position, and if you play it, your teammate’s going to get the opportunity to score. And they sort of got that in the military.”

For some, warrior hockey and the ability to be part of a team and unit is their first real introduction to playing hockey. For others like Vaccaro, who played high school hockey in Buffalo, N.Y., before joining the military, warrior hockey is a way to re-discover the game they loved as kids.

“There’s a wide variety of players,” Vaccaro explained. “Some guys played a little bit and knew how to ice skate and are just starting, others played high-level college hockey, and then after college, joined the military, so they still got some skills to bring. But there’s some guys here, they never skated, let alone played hockey. And they’ve gone through learn-to-skate programs and they’re actually now playing on the teams.”

This weekend at the Warrior Classic, that special connection that former military personnel felt with their teammates even extended to their opponents. With teams from places such as Buffalo, Minnesota, Dallas, Pittsburgh and Chicago, the chance to mingle and bond with fellow veterans from across the country has been a positive experience.

“It’s not just being on the team and being a part of it, but now you’re playing another team,” Vaccaro added. “You’ll get guys on the ice that have Army patches on their sleeve, and they’ll face off next to a guy that’s got a Navy patch, so they’ll do a little bit of ribbing. ‘Army’s better than the Navy,’ and that goes around, and everybody’s really nice about it. That’s the way it is in the regular military, so it just carries on onto the ice.”

And being part of a team and keeping active by playing hockey has been helping these disabled veterans improve their condition and better adapt to their new circumstances in life.

“It’s sort of like a therapy for us because the discipline that helped these guys when they were younger in the military, they’re now experiencing out on the ice, and as a result, the game’s helping them get through their traumatic injuries or whatever they have going on,” Vaccaro explained. “And that’s what it’s all about. Even though we’re here having fun, we raise money and play hockey, it’s helping these guys get through life, getting through their problems they’re having with their marriage, with their kids, and just daily life things. Without USA Hockey, we would have never had this opportunity.”