All-American Prospects Game Officials Get Their Time to Shine

When Andrew Bruggeman learned he was going to be one of the officials at the 2018 USA Hockey All-American Prospects Game, the North Mankato, Minnesota, native was excited.

But when he heard who the other official and two linesmen would be – Kevin Briganti, Sean McFarlane and Patrick Richardson – he got even more excited for a different reason.

“It’s an awesome group of guys,” Bruggeman said. “I was more excited for those guys to get the opportunity than I was myself.”

Each year, four officials out of USA Hockey’s Officiating Development Program are selected to work the All-American Prospects Game. For the officials, it’s a reward for the work they have done moving their way up the levels of hockey.

Bruggeman started in the Officiating Development Program when he was in college at Minnesota State University Mankato. He had previously worked youth games, but saw the program as an opportunity to officiate at a higher level.

Officials start out in leagues such as the North American Hockey League or the United States Hockey League. Eventually, most officials end up moving into higher levels. Once they graduate they often end up in professional minor leagues like the ECHL. 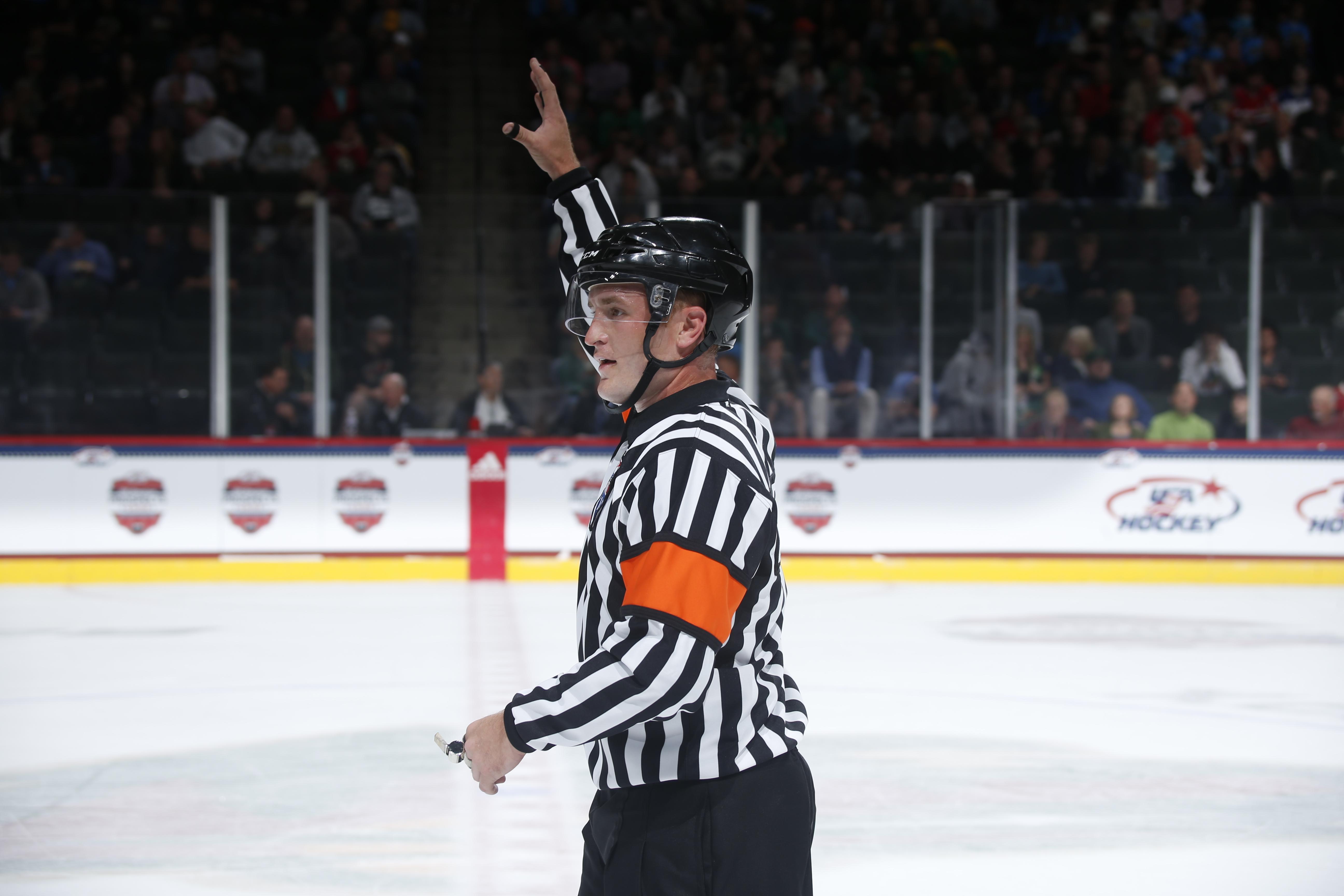 Bruggeman at the 2018 All-American Prospects Game

“We’ve been able to identify officials at the grassroots level and educate and develop them into really, really solid officials,” said Scott Zelkin, the manager of the Officiating Development Program. “It takes officials who are passionate about officiating and direct it so they can be part of the game.”

Bruggeman started at the junior level and worked his way up. He eventually got to officiate Game 3 of the USHL’s Clark Cup Final between Tri-City and Dubuque at a sold-out arena in Kearney, Nebraska.

“They finished the introductions and all of a sudden [I] had goosebumps,” Bruggeman said. “It was a really cool experience.”

As Bruggeman was starting his ascent in the officiating world, Patrick Richardson was well on his way as a linesman. He was selected to be a part of this year’s All-American Prospects Game officiating team as he enters his 16th season as USA Hockey registered official.

“It was cool. A lot of guys I’ve worked with over the years have officiated that game and told me how great the experience was,” Richardson said. “When [Zelkin] called, it was truly a humbling moment.”

For both Bruggeman and Richardson, this year’s game at Xcel Energy Center in St. Paul, Minnesota, was the first time they had ever worked a game on an NHL rink. Zelkin is aware of some of the challenges these officials may face and tries to give them advice before the game begins.

“You’re on the ice with a tremendous amount of talent,” Zelkin said. “The advice we give to these officials is to not take anything for granted and don’t assume nothing is going to happen. You have to be ready but also try and stay out of the way as much as possible. The players are trying to make an impression on those scouts up in the stands.”

Ten of those players who were showcasing their talent on the ice were playing in their home state. This was also the case for Bruggeman. It was his first time on the ice at Xcel Energy Center since he played in the 2008 Minnesota State High School League state tournament.

“Just getting to be there in a working capacity and be under those bright lights again was so cool,” Bruggeman said. “The atmosphere is great too. The players are laid back and it gives you a chance to focus on the game while also soaking in the experience.”

When asked to describe this year’s group, Zelkin spoke about all of the officials’ willingness to give back. It’s something Richardson and Bruggeman say is important to all of the participants in the Officiating Development Program.

“I owe everything to this program. Without it, I wouldn’t get to officiate games in the ECHL or AHL,” Richardson said. “It gave me structure and taught me how to be a professional. Every one of us is still very willing and are willing to give back as much as we can.”