It was a banner year for the Pink Socks last February at the Labatt Blue/USA Hockey Pond Hockey National Championships.

For the first time in its six years competing, the Pink Socks won more than one game. In fact, the team actually advanced to the playoffs.

But getting to play another game in the tournament was both good and bad for the guys.

“It’s a mixed bag,” team captain Matt Dycus said. “Some of the fun we want to have has to be sort of put on hold for a little while. But for the most part, the first time we get to do it, we’re going to savor it. We’re going to have fun.”

“We were actually chatting about it, we’re kind of upset we made playoffs because we were just hoping to hang out and watch other teams,” team member Mike Zickus joked. “But, yeah, we snuck into the playoffs. The problem was we played the No. 1 seed.”

The team, which hails from the western suburbs of Chicago, got the eighth and final playoff spot in the Bronze 30+ Division. It ended up falling to DORAL, 11-9.

The Pink Socks, who range in age from 35 to 47, didn’t do very well the previous five years competing on the pond. But this year the team changed divisions. Two years ago, the team was on the waiting list to get into the tournament, and the guys received a call that there was an opening in the Silver 21+ Division.

“We said we’d rather come up and lose and enjoy the crowd and hang out and have fun, so we got destroyed that year,” Zickus said. “I think we’re in the right bracket this year.”

Zickus noted switching divisions played a large role in the team’s success this season, going 2-2 on the weekend and getting into the playoffs because of goal differential.

“We modified the team a little bit,” Zickus said. “We had a couple of guys that didn’t come this year that went last year, and a couple different guys and we just meshed well.”

Said Dycus: “It’s a good group of guys. We lost a few guys that didn’t fit into the full team concept, which means the playing hockey and the fun off the rink. It’s the group of guys that makes it fun.”

The team’s camaraderie is solid since all seven guys also play together for the Northwest Flyers in the B/C1 Division of the Rolling Meadows Adult Hockey League.

Playing on the same team on a weekly basis correlated to this year’s success on the pond.

“We know that some guys are quicker and speedier, so they kind of play up front,” Zickus said. “We have a couple of guys that play back, they’re bigger, their skates are bigger, so you’ve got to use that strategy out here playing goalies. Bigger skates and a stick so you can play goalie. We strategize that way knowing which guys you have on your team.”

The guys love getting out once a year and playing away from the weekly schedule of adult league hockey. The pond tournament offers so many different experiences for the players.

“The roots of pond hockey,” was one example Zickus cited. “We get back to playing on the pond and skating. It’s just a fun trip to come up here and see all the teams, the jerseys. It gets bigger every year.”

“This is a blast, that’s it,” Dycus said. “It’s one of the most fun times of the year. You look forward to it. As soon as you do registration, you’re like, ‘I’m ready to go.’”

The Pink Socks players take the games on the pond seriously, but they never want to get too high or too low.

“We try,” Zickus said. “You see some games that get really intense. I’ve seen some of the Gold [division] games, those guys skate hard and there’s some pushing and shoving on the ice and stuff. If the game gets that way, we can play that way, but that’s not our style. We’re here to hang out and have fun.” 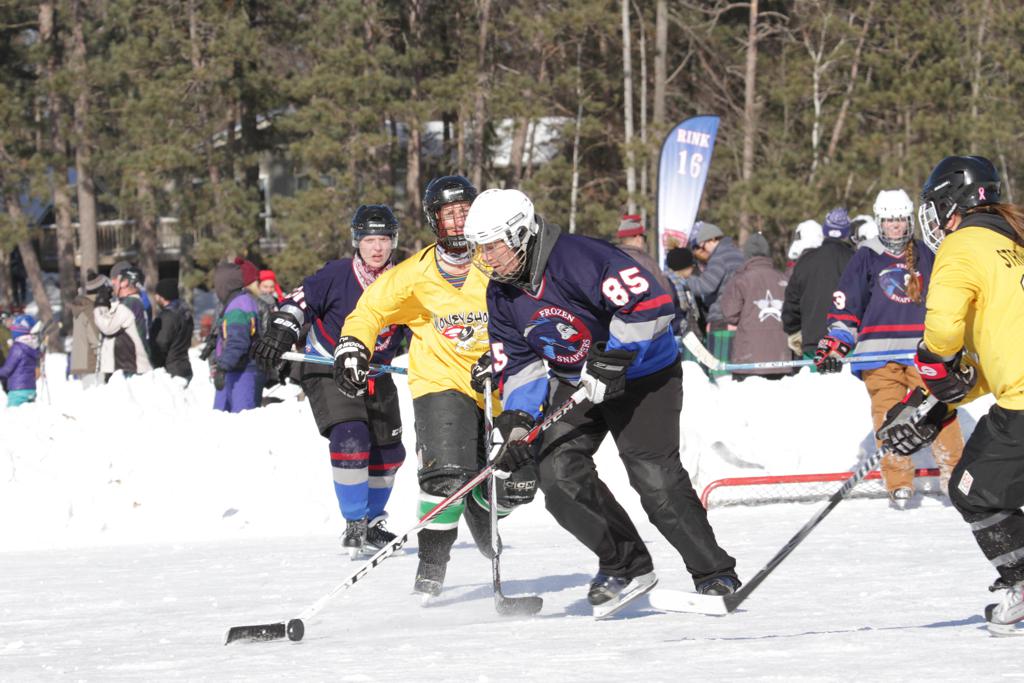