When Some Texas Boys Hit The Frozen Pond

Every year after the Labatt Blue/USA Hockey Pond Hockey National Championships, the guys from the Buffalo Wild Wings team have a tradition.

They head out on Dollar Lake in Eagle River, Wisconsin — the site of the national championships — and for about two hours play hockey as a group. It’s quiet and calm on the lake, a total contrast after three days of having 24 rinks in action the majority of each day.

“We come back down with all of our guys around 2 o’clock in the afternoon and we have our own little, mini tournament and drink some beer and have some more fun, play some more pond hockey,” team member Lyle Green said. “We clean up and have dinner and we head back to Houston on Monday.”

The Buffalo Wild Wings team makes its trip worthwhile coming all the way from Houston every year. The guys have carried their tradition for about 10 years, which is the length of time they have been coming to the tournament.

Buffalo Wild Wings first competed in the national championships in 2007.

“We thought this was a one-time thing, bucket list kind of thing and we loved it,” said Green, whose team plays in the 50+ Tier II Division. “We thought this was the best hockey on the planet. They put on a great event here. We just got hooked on it and said, ‘We’ve got to go back.’ And now, 12 years later, we’ve been back here 10-12 times and we just keep coming back because it’s so much fun.”

That first year it was a team of six players. Now, Buffalo Wild Wings sends up to five teams every year. It’s grown to mammoth proportions.

Buffalo Wild Wings, which ranges in age from 50-59, has had some success in the past, making it to the playoffs twice.

“We’ve had some good years and not so good years, but it doesn’t matter, it’s still a lot of fun to be up here and play the game and just hang out with everybody,” Green said.

Ti Shuman made his first trip up north to pond hockey in 2017. He loved playing in the tournament and returned the next year. It was a little different hockey for the native Houstonian.

“You can describe it, you can see pictures, but until you experience it, you just don’t know,” Shuman said. “For me, it’s mostly learning how to dress for the cold.”

Green grew up in south New Jersey, so he’s used to the colder weather despite being a Texas transplant.

“Most of us are from up north, maybe one or two Houstonians in the group, but everybody’s from up north,” said Green, who played hockey for 11 years in Chicago.

Green has had a great time in his 10 trips to pond hockey. He’s missed two tournaments over the years, but he keeps gravitating back.

“It’s for the love of the game,” said Green, who is 59 years old. “This is so different. We grew up as kids playing on frozen ponds and lakes, and just to get to do this as an adult is unreal.”

“These guys talking about growing up and doing this as a kid, no, not me,” joked the 51-year-old Shuman.

Shuman enjoys representing Texas and the south when playing in pond hockey. He loves to tell fellow hockey players where he grew up.

“I enjoy being a native Houstonian where you don’t think about hockey and then you’re out here playing against these guys from Chicago or Minneapolis,” Shuman said. “There was a team [this year] that said, ‘Where you from? Houston? No, you’re not.’ They enjoyed seeing a Texas team as much as we enjoyed playing against them.”

Green soaks in the overall experience every year he attends. It’s something he looks forward to every year.

“The hockey’s great, you meet a lot of nice guys and ladies from different parts of the country who love hockey and it’s just the camaraderie,” Green said. “It’s just an opportunity to hang out. The culture’s different, the food’s different, the weather’s different. It’s a nice change of pace from the hot and humidity in Houston, Texas. But it’s hockey that brings us all together.”

The guys on Buffalo Wild Wings know each other well. They play together in a league on Thursday nights in Sugarland, Texas. Getting a chance to skate as a team on a weekly basis helps camaraderie when it comes to the pond.

“If it wasn’t for the guys, I wouldn’t have made it back again,” Shuman said. “It’s an hour and a half of hockey. It’s not worth a two-and-a-half-hour plane ride and then six hours driving for that if you don’t have the guys with you.” 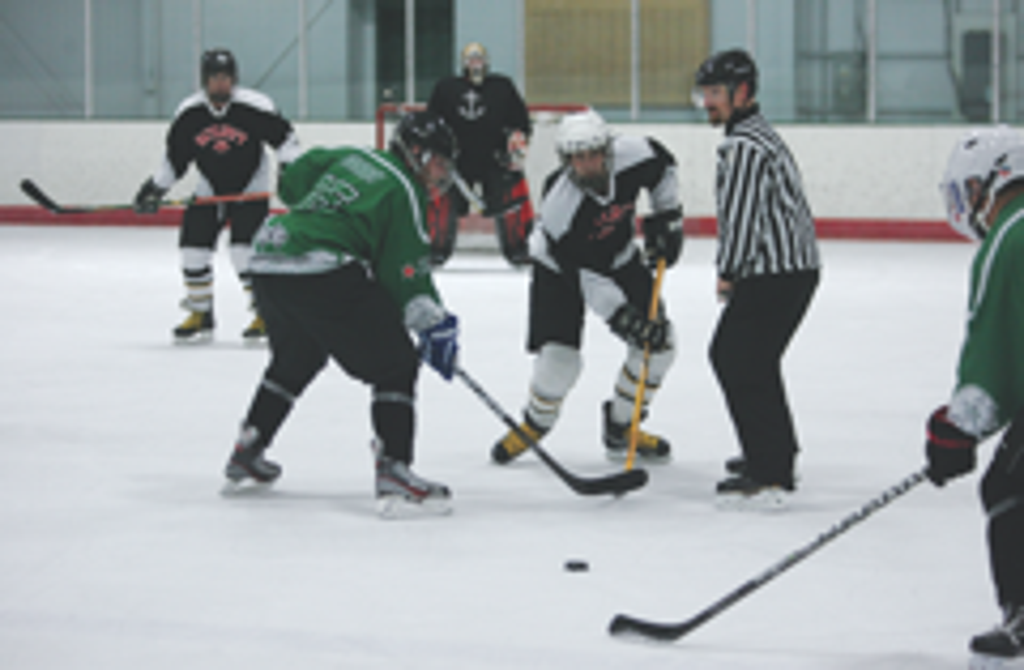