Sharpen your skates – Welcome Back Week is here!

It's time to drop the puck

Summer was nice, but we’ve all missed the ice. Fortunately, the wait is over. It’s Welcome Back Week for hockey players nationwide.

From Sept. 17-23, 2018, USA Hockey is celebrating hockey’s opening week and extending a warm invitation for players and parents to rejoin us at the rink for another great season.

As the game’s national governing body and the endorsed player-development program of the NHL, United States Olympic Committee and the International Ice Hockey Federation, USA Hockey offers everyone a place to play, love and excel. Last season, a record number of players – 562,145 – answered that call in the United States. It marked the fifth straight season of increasing American participation.

And speaking of calls, youth hockey players throughout the nation recently received a personal invitation from USA Hockey and some of its biggest stars, who were working the phones prior to Welcome Back Week. It was a well-timed reminder that the puck drops now. And don’t forget, in addition to opening-week celebration activities, USA Hockey will also host major annual events like IIHF Girls Hockey Weekend (Oct. 6-7, 2018) and Try Hockey For Free Day (Nov. 10, 2017) in the season’s opening months.

Going for gold will be the theme when the calendar turns, with the U.S. National Junior Team aiming for its fourth consecutive medal at the IIHF World Junior Championship (Dec. 26, 2018-Jan. 5, 2019) in British Columbia. February will welcome the 14th annual Labatt Blue/USA Hockey Pond Hockey National Championships in Eagle River, Wisconsin (Feb. 8-10, 2018), and USA Hockey’s second nationwide Try Hockey For Free Day of the season (Feb. 23, 2019) in conjunction with Hockey Week Across America. After that, it’ll be March and April, with USA Hockey Nationals for youth, girls, high school, sled and adult hockey at sites across the country. Also in April, the U.S. Women’s National Team will compete for its fourth consecutive gold medal at the IIHF Women’s World Championship (April 4-14, 2019) in Finland. In May, The U.S. Men’s National Team will look to build on last year’s bronze medal at the IIHF Men’s World Championship (May 10-26, 2019) in Slovakia. After that, we’ll all watch to see who hoists Lord Stanley’s silver chalice, then hang up the skates for summer vacation.

“We're always eager to get back on the ice this time of year, whether it’s coaching our kids or playing or both,” said Pat Kelleher, executive director of USA Hockey. “It’s a great time of year, remembering the excitement of our own first steps on the ice and everyone who helped us take those first steps. We get to return the favor with a new generation of American players every September, and that’s what Welcome Back Week is all about.” 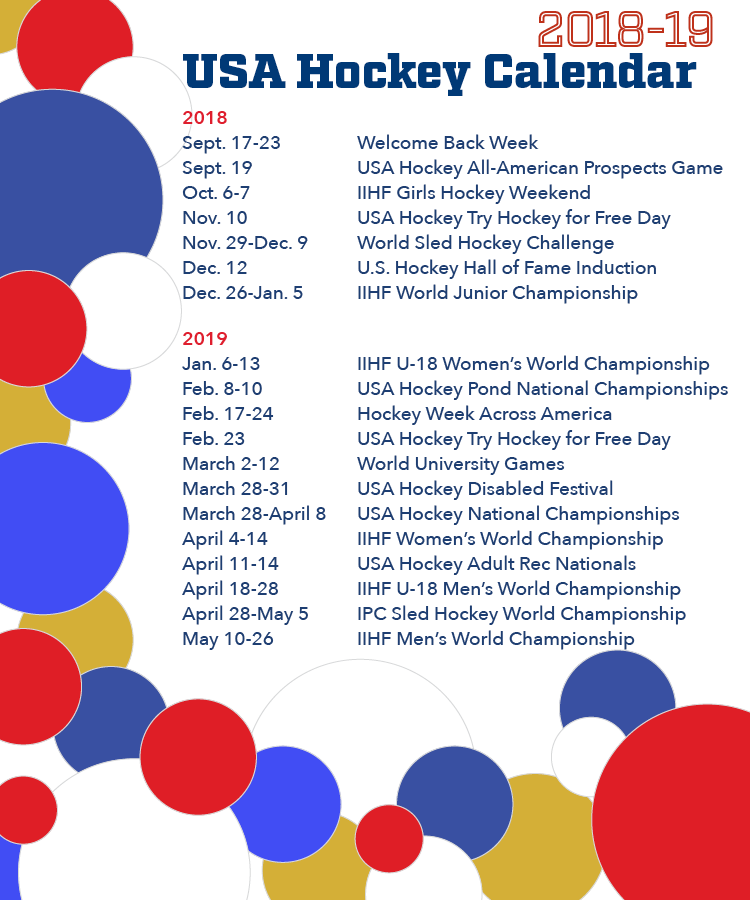