The lame excuses your friends make (and why they’re wrong) 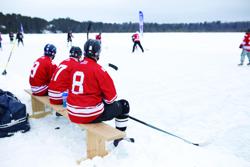 Friends give all sorts of excuses why they can’t or won’t join your adult hockey team. Here are the top eight excuses you will hear – and why those excuses are all lame.

Why it’s lame: Yes, our lives are increasingly busy. Work is stressful, and if a spouse and kids are in the mix as well, then time is at a premium. But for things that are truly worth it, we need to make time. And USA Hockey-sanctioned leagues often run all hours of the night. You’ll find that the time it takes to play every week is about as long as it took every week to make excuses not to play.

The excuse: “I don’t have enough friends that play.”

Why it’s lame: Well, first of all, if you were invited to play by a friend and you say this, then that’s kind of hurtful. But more to the point: Part of the reason you should join an adult hockey league is to make new friends. The camaraderie of a team full of like-minded people is a surefire way to do that.

The excuse: “New equipment is too expensive and my old stuff doesn’t fit any more.”

Why it’s lame: This isn’t the NHL. You don’t need top-end gear. If cost is an issue, find your gear second-hand, or better yet, find a friend with extra equipment and borrow it. You could also take initiative and apply for the USA Hockey Adult First Goal program, which is a free grant-based program that supplies resources, including equipment, to leagues looking to grow their membership.

Why it’s lame: Again, this isn’t the pros. Chances are, plenty of the players in your league aren’t spending several hours every day blasting their core at the gym. Most of them are probably a lot like you. There’s just one difference: If they feel like they’re out of shape, at least they’re doing something about it by burning a ton of calories playing hockey. Why shouldn’t you?

The excuse: “I don’t want to commit to a whole season.”

Why it’s lame: If you don’t want to commit, don’t commit. Ease your way into things by agreeing, at least, to show up sometimes. Or better yet, ease your way into adult hockey – either for the first time or as a returning player – by finding drop-in pickup games that fit your schedule. It’s more important to get on the ice even a little than to stay on the sideline.

The excuse: “I’m too old to start playing.”

Why it’s lame: First, you’re never too old to start doing anything. Second, USA Hockey has beginner classes in many markets that help teach the game and provide a foundation for new players. You’ll never know if you like it until you try it.

The excuse: “Hockey isn’t a big deal where I live.”

Why it’s lame: These days, hockey is a big deal everywhere. Sure, there might be more rinks in Minnesota than Kentucky, for instance, but you can find a league within a reasonable distance more places than you might think. And if hockey really isn’t a big deal where you live, make it a big deal and start growing the game.

The excuse: “I had a bad experience last time I played.”

Why it’s lame: Maybe you were unlucky to have a bad experience. USA Hockey administrators, officials and league operators around the country have taken great strides to continually improve the adult hockey experience for everyone. Finding the right league, with the right skill level, and the right people, is possible throughout the country today. And those opportunities are growing.

Hopefully this list will provide both a spark for players on the fence about whether to join a league and ammunition for those trying to convince them.