George McPhee and Brian MacLellan were co-captains for Bowling Green 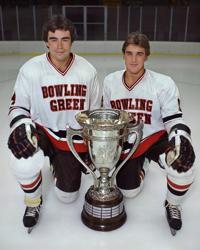 The careers of Vegas Golden Knights General Manager George McPhee and Washington Capitals GM Brian MacLellan can be traced back to their childhoods, through youth hockey, into college at Bowling Green and deep into the National Hockey League.

Now, the teams they lead are playing for the Stanley Cup.

McPhee touched on the irony of dueling against a fellow general manager he has known for more than 40 years in the Stanley Cup Final.

“It’s sort of gone this way, and hard to believe, but we’ll enjoy it,” McPhee said. “It beats some of the jobs we had when we were kids.”

McPhee and MacLellan, who were born fewer than four months apart in Guelph, Ontario, share a long connection that goes back to playing youth hockey together in their hometown. The pair, both 59, were also teammates on the 1977-78 Guelph Platers, which captured the Canadian ‘Jr. A’ championship.

“As a player, he was a really talented guy,” McPhee said of MacLellan. “He had a genetic gift. He was a big, talented guy.”

McPhee had an up-close and personal view of MacLellan’s career and MacLellan the same, as the two played four seasons together at Bowling Green State University from 1978-79 through 1981-82. The two lived together for a time and helped Bowling Green to a pair of Central Collegiate Hockey Association (CCHA) regular-season championships.

MacLellan still has old photos of the occasion.

“We won it twice and they took that picture,” MacLellan said. “Looking back, it’s kind of a goofy picture because you’re kneeling, and I kind of made fun of his haircut. He doesn’t like that one, but he likes the other because he thinks he looks better in it. It’s a long time ago. It’s a good memory.”

MacLellan, a two-time captain at Bowling Green, began his career at forward before moving to defense. He notched 63 points as a freshman, second-most in school history behind McPhee, who tallied 88 points in the same year. MacLellan’s 34 goals is the eighth-best single-season mark in school history.

When McPhee finished his career at Bowling Green, he held the school and league scoring records with 267 points (114 goals, 153 assists) in 153 games. McPhee became the first ever CCHA player to win the Hobey Baker Award, given to the top player in men’s college ice hockey, and his No. 9 was the first in Bowling Green hockey history to be retired.

McPhee and MacLellan were both inducted to the Bowling Green Athletic Hall of Fame in 1987.

“We played junior together and then we both went to Bowling Green on scholarships, so we lived together,” MacLellan said. “It was fun.”

In an ironic twist, McPhee served as the Capitals general manager from 1997-2014. McPhee, who acquired 13 of Washington’s 25 players who have appeared in the 2018 Stanley Cup playoffs, is the first general manager since 1967-68, and just the second in league history, to face a former team of which he was the general manager in the Stanley Cup Final.

“I’m certainly proud of the Washington team and the players,” McPhee said. “We made good selections and they turned out to be real good players. I can certainly take pride in that. And when you’re working with them, they’re sometimes like your own kids. You’re on call for them all the time, you’re trying to help and steer them in the right direction, and then you get fired, and you’re suddenly persona non grata because nobody wants to be too close to you in the organization. I understand that things change quickly and that’s the business. But certainly, I’m really happy for them and really proud of the team we have in Vegas.”

MacLellan was named senior vice president and general manager of the Capitals in 2014, taking over after the organization fired McPhee. MacLellan was a fixture in Washington for the previous 13 years, serving first as a pro scout and then director of player personnel.

“I remember, we talked about players when we were kids and when we were a little bit older, and he always seemed to have a good read on players,” McPhee said of MacLellan. “I called and asked him if he would be interested in doing something like this, just to start on a part-time basis. And he did, and he got good at it, and he was a real good evaluator.”

Now, MacLellan is in the Stanley Cup Final as the general manager of the Capitals, squaring off against the Golden Knights and McPhee, his childhood friend and former long-time teammate.

MacLellan admits the two aren’t as close as they used to be, but they have continued to keep in touch, and it has led them all the way to the Stanley Cup Final.

“It’s kind of a weird experience,” MacLellan said. “We kind of have been texting back and forth how strange it feels to have this line up the way it has. It’s a little awkward, but it’s going to be a fun experience, I hope.”