P.K. O’Handley has been managing and coaching winners in Waterloo for 16 years. Jackson Cates has built himself into one of the United States Hockey League’s top players over the past two seasons. Ben Finkelstein only needed part of a season to make a major impact.

Together, O’Handley, Cates and Finkelstein landed four of the major USHL postseason awards for the Black Hawks to go along with the Anderson Cup that Waterloo won as the league’s top team during the regular season.

The selection of Handley as both the Coach of the Year and the General Manager of the Year completed the Waterloo run on USHL awards.

Cates was earlier named Forward of the Year and Finkelstein was selected Defenseman of the Year.

Finkelstein, a Florida Panthers draft pick, took the league by storm, earning his award in voting from opposing general managers despite not joining the Black Hawks until mid-January and playing in just 23 games.

“We were fortunate to acquire him,” O’Handley said of Finkelstein, who joined the team after leaving St. Lawrence University. “He was a difference maker, for sure, with the way he came in and became a teammate first and, certainly, his talent spoke for itself.

Waterloo scored points in the standings in the final 16 games of the regular season.

Finkelstein earned Defenseman of the Week honors five times while compiling eight goals and 26 assists. The 20-year-old from Burlington, Vt. had a six-point effort in his third game for the Black Hawks.

“I thought the team welcomed him; he embraced the team and from that point forward, we kind of took off,” O’Handley said.

A seventh-round pick in the 2016 National Hockey League Draft, Finkelstein has decided to continue his college career next season at Boston College.

“His offense from the blue line was evident from the very start,” O’Handley said. “I think he enjoyed his time here, embraced his time here and really made a mark on our program.”

By the time Cates finished the 2016-17 season, he had reached double figures in both goals and assists. He tripled both totals in his second season with 33 goals and 30 assists, making him one of just three players in the league with at least 30 of each.

“His offense and his confidence just went to new levels,” O’Handley said. “His work habits are as good as any high-end forward that we’ve had.

“Just the way he practiced and the way he approached it was at another level. It’s no surprise that he put up the numbers that he did. But not only did he put up numbers, he was very complete in all other areas of the game as well.”

The 20-year-old from Stillwater, Minn., is committed to the University of Minnesota-Duluth for next season.

O’Handley has been named Coach of the Year four times and General Manager of the Year three times, including also landing both awards after the 2002-03 season.

Waterloo went 38-14-8 and used a season-ending, six-game winning streak to finish one point ahead of the United State National Team Development Program.

“I’m proud to accept these awards on behalf of our entire staff, including Shane Fukushima, Bryce Anderson, Jon Sherman, Todd Klein and Spenser Popinga, because it takes many dedicated people to have success in this league,” O’Handley said. “Most of all, I would like to recognize our players who have been a special group and consistently found success regardless of our circumstances all year.”

The Muskegon Lumberjacks landed two awards with Anthony Del Gaizo named Player of the Year and Matej Pekar Rookie of the Year. The Tri-City Storm’s Filip Larsson was selected Goaltender of the Year.

Del Gaizo led the USHL in points and assists.

Larsson led the league in goals against average and save percentage. 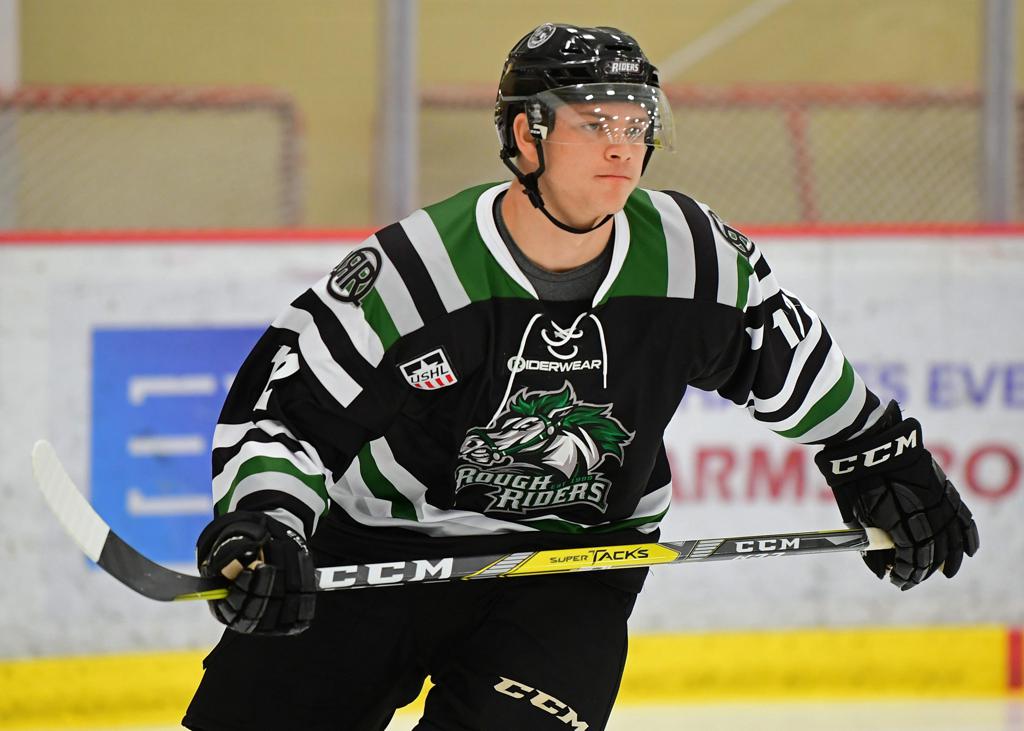