The 1998 gold medalist is not alone, as members of 2018 gold medal team have taken to the airwaves, too

Mleczko, a forward on the 1998 U.S. Olympic Women’s Hockey Team that won gold in Nagano, Japan, made history again as the first woman to call a National Hockey League playoff game last month.

“It’s a bit surreal, and I’ve been involved in broadcasting for a long enough time that it’s a place where I’m pretty comfortable,” Mleczko said. “I’m a huge fan of hockey at every level and the NHL is such an amazing product. I watch NHL games, and to be in the booth calling the game is certainly very exciting. For NBC to trust me with playoff games, it feels good.”

Mleczko, a native of Nantucket, Massachusetts, who played hockey at Harvard University, recently served as a color analyst during the women’s Olympic hockey tournament, her fourth Games as a hockey broadcaster. The two-time Olympic medalist worked alongside NBC’s Kenny Albert during the first-round series between the Nashville Predators and Colorado Avalanche. She was also on the call in March during a game between her hometown Boston Bruins and Detroit Red Wings.

“It’s amazing and I’m honored that they gave me this opportunity,” Mleczko said. “There are so many more women involved in broadcasting than there ever has been in the past. People are making a big deal out of it, but at the same time hockey is hockey. I’ve played the game at a high level, I’m a student and fan of the game, I work hard to improve, and I do my homework, and that’s all you need to be successful. I’m very appreciative of the opportunity that Sam Flood and NBC Sports has given me.” 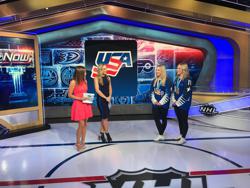 Broadcast opportunities are also opening for members of the 2018 U.S. Olympic Women’s Team after capturing the country’s second-ever Olympic gold medal in February.

U.S. captain Meghan Duggan worked as an analyst for NBC Sports Boston during the Stanley Cup playoffs. Duggan, a native of Danvers, Massachusetts, was featured on a postgame show alongside Michael Felger and Tony Amonte.

“I think it’s phenomenal that they have been given these opportunities and they have taken advantage of them,” Mleczko said. “There are women involved and they’re out there. And with them being interviewed so much, network executives are seeing that they’re very good, they can express themselves and saying, ‘Let’s give them a shot.’”

Team USA forward Haley Skarupa, a native of Rockville, Maryland, also worked with NBC Sports Washington recently, just another example of many from the gold medal-winning team who are receiving some much-deserved additional exposure.

“John Walton, my partner at the Olympics, is also the radio voice of the Capitals and he told me [Skarupa] was on and did a fantastic job,” Mleczko said. “These opportunities are becoming available so hopefully more and more women will get their shot. The door opens, but you have to take advantage of it. Hopefully these athletes who are given the opportunities don’t feel the pressure because they’re going to do a great job and they have done a great job whether they’re being interviewed or are doing analysis.”

Mleczko believes the gold-medal victory — in addition to a silver medal won during the 2014 Olympic Winter Games in Sochi, Russia — will inspire a whole new generation of girls across the world. She sees similarities to the same feat her team accomplished 20 years ago in Nagano, Japan.

“I think that’s what our team did 20 years ago when women’s hockey wasn’t on the radar,” Mleczko said. “It has been on the radar and building over the last two decades, but I think now this [gold medal] reinvigorates a whole new generation. People look back to the Miracle on Ice and how many boys started playing hockey, there’s no question the 2018 gold medal is going to be one of those moments for women’s hockey.”