Albuquerque Packs in Participants at Try Hockey for Free Day

More than 150 kids turned out to try hockey

USA Hockey continues to see record-setting growth at the 8U level, thanks to initiatives like Try Hockey for Free Day.

On March 3, more than 13,000 children ages 4 to 9 attended Try Hockey Day at rinks all across the United States. In Albuquerque, the turnout was just as remarkable for the New Mexico Ice Wolves, as over 150 kids took the ice at the Outpost Ice Arena.

Ordinarily, rinks are given enough equipment for around 40 kids to use during the hour-long session. So many kids registered for New Mexico’s Try Hockey Day, three separate sessions were held, with 50 in each session.

“It was a good problem to have,” said Jeff Thompson, president of New Mexico Ice Foundation. “We had some leftovers from years past. We always try to save what we don’t use. We did come up with stuff [for the kids to take home], whether it was a New Mexico Ice Wolves hockey puck or some stuff we had around. Every kid left with something.”

Thompson believes the U.S. Olympic Women’s Team winning the gold medal at last month’s Olympic Winter Games was a huge factor in generating excitement for Try Hockey Day. The foundation also handed out flyers at elementary schools, and ran 15-second ads on the local NBC television affiliate during the Olympics, promoting the event.

“It was huge for us,” Thompson said. “Word of mouth has been big for our organization, too. If you target people you want, and make them feel wanted and special, the more your return is going to be on your investment, as opposed to casting this wide net to kids.”

Tim Jaglinski, head coach of the Ice Wolves’ house and travel teams, estimates the number of kids at past Try Hockey Days was 60 at the most, so this event greatly exceeded his expectations.

“The turnout was amazing,” Jaglinski said. “We were getting updates on registration, and we were going, ‘Uh-oh, get some more ice, better get another hour.’ It was really exciting to get that response.”

Before kids went on the ice, coaches talked to them about how to get up after falling, how to hold the stick, and generally tried to put them at ease.

“We just let them know they’re going to fall, [but] it’s going to be OK, we’ll all be here to help you out,” Jaglinski explained. “Things usually go pretty well.”

Once kids got a feel for the ice, coaches gave them the opportunity to move around, then brought out pucks and let them have the thrill of scoring goals. Most of all, they were encouraged to enjoy the experience and have fun. About 40 volunteers comprised of coaches, board members and older players helped each child dress in full gear and conducted the on-ice sessions.

Youth programs like the Ice Wolves are committed to more than just developing great players on the ice. Kids also learn the importance of building good character. Thompson and his staff received several emails from parents who were moved by the effort the older players made to spend time with the younger beginners during Try Hockey Day, giving them encouragement and cheering them on as they gained confidence. One parent praised an older 10U player who spent time with her son, patiently helping him dress and calming his initial fears of going out on the ice.

“My daughter had a rough time at first, but in the end, she loved it,” another parent wrote. “I’m 100 percent certain the day would have ended in tears if it wasn’t for all the volunteers/coaches being so patient and kind.”

The day was successful for the Ice Wolves on another front. New players were given the opportunity to sign up for Pond Hockey, an eight-week spring program for players wanting to take the next step toward playing hockey. Coaches conduct weekly one-hour sessions to prepare new players for further development. Of the 150 kids who attended Try Hockey Day, 48 had registered for Pond Hockey within the first week. More than 200 players from 4 through high school age are currently enrolled with the Ice Wolves. Thompson would like to see an increase in the number of high school players. The way to do that, he says, is to start at the grassroots level with 6U and 8U players.

“There’s no magic potion to go out and find high school-age kids who want to play hockey all of a sudden,” he explained. “It’s a long process, and we’re committed to that process of growing the organization from the bottom up.” 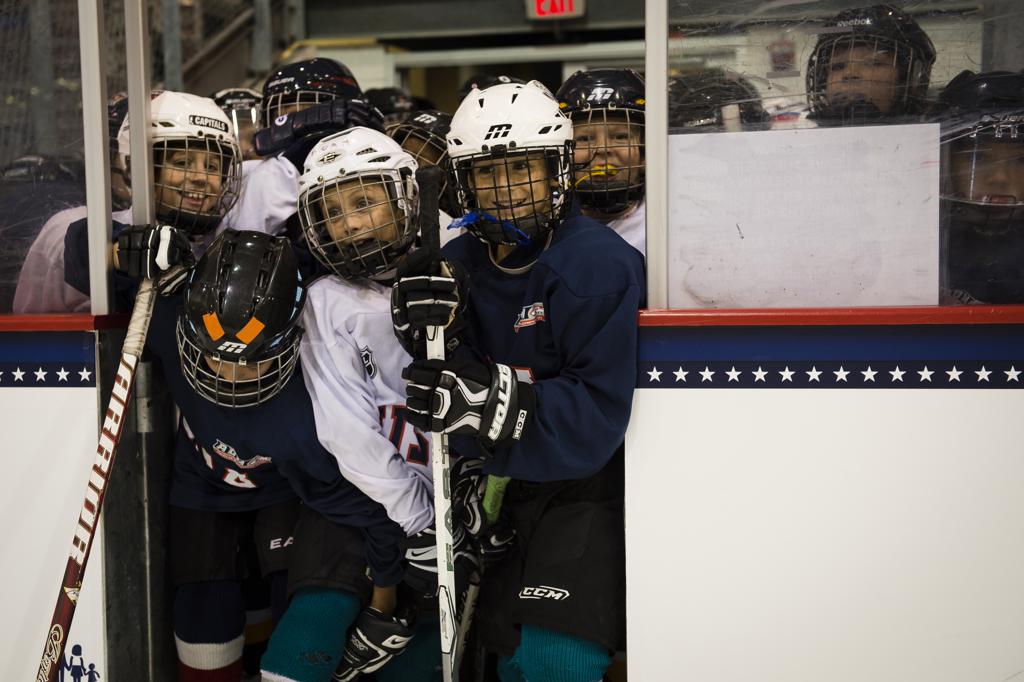