Purpose: This is a competitive way to start practice using a drill that doesn’t require a goaltender. The purpose is to win puck battles, pass the puck, control the puck and offensively support the puck. Defensively, the purpose is to defend your player and steal the puck, either during a 1v1 battle or by intercepting a pass.

Procedure: Coach dumps a puck into the zone. Three Xs compete against three Os. To win the game, all three players on a team (X, in this example) must complete at least one pass to each other (each X needs to catch at least one pass) and then finish the game with a single successful pass to the “roaming coach” (C2). All passes must be made successfully and all three players must control the puck upon receipt of a pass. More than three passes are allowed among the teammates, e.g., back and forth to X1 and X3, but before the pass to C2 is made, all three players (X1, X2, X3) must control the puck and be in on the play.

Coaching Points: Emphasize getting to the puck first at the start of the drill and winning that puck battle. Offensively, emphasize puck support and short passes rather than long, spread-out passes that are easy to read or intercept. Puck carrier should rarely try to beat an opponent 1v1. Instead, this drill should emphasize quick, smart puck movement, players moving without the puck, getting open, playing with their stick on the ice (give a good target) and using verbal communication to call for the puck.

Defensively, coaches should emphasize good body position (take good angles, force offensive players to the outside, clog passing lanes), playing with head on swivel, sticks on ice and anticipating when to pressure the puck.

Also, for both teams, emphasize quick transition to defense or offense when possession changes.

C2 must have the ability to roam and anticipate when the offensive team makes their second successful pass to get open to finish the game. 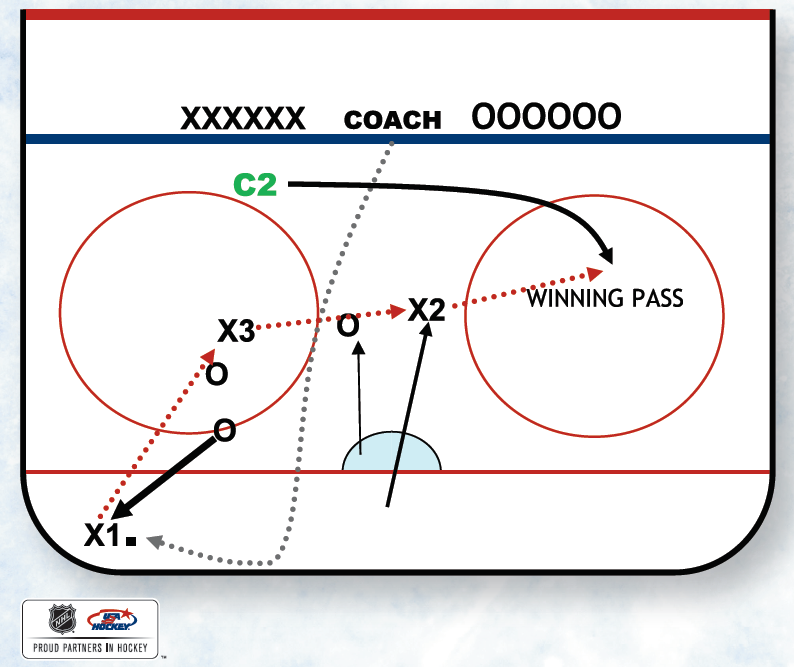