'Coach Dima' to be honored Saturday in Fairbanks 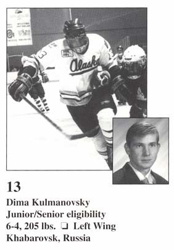 It’s 3,000 miles from Khabarovsk, Russia, to Fairbanks, Alaska, which means Dima Kulmanovsky traveled a long and winding path to earn 2018 Coach of the Year honors.

Raised on soccer, bandy and hockey in the then-Soviet Far Eastern Federal District, Kulmanovsky eventually took a leap of faith and enrolled at the University of Alaska Fairbanks. He skated with the Nanooks for three seasons in the mid-1990s and eventually earned his MBA. As he told Randy Zarnke of the Fairbanks News-Miner, “I wanted a better life, so I decided to stay in the U.S.”

Like so many others, he found his way into coaching youth hockey when his son first tried the game. That was more than a decade ago. Today, “Coach Dima” is still leading kids on the ice in Fairbanks, while also leading a local plumbing company by day.

“My main goal is to make sure that those kids who try hockey, fall in love with the game,” he told Zarnke. “I constantly preach individual skill development (skating, passing, shooting, stick-handling and body-checking).”

Not surprisingly, Kulmanovsky, 44, is a leading advocate for USA Hockey’s American Development Model. In addition to his duties as Hockey Club Fairbanks player development director, he also helps coach and evaluate at the Pacific District Player Development Camp and the Western Regional High Performance Camp.

Saturday, he will be formally honored as Coach of the Year during the Fairbanks Hockey Hall of Fame induction ceremony. For more on Kulmanovsky, please click here to read Zarnke’s News-Miner story.