Coaching Points: Have two lines go at the same time. On the whistle, have the X1 player depart the line without a puck. X1 then receives a pass from the X2 line (1) and one-touches the puck back to X2 (2). X1 then continues around the green dotted circle and receives a puck from the original X1 line (3) and one-touches the puck back (4). X1 then skates toward O3 line, receives pass (5) and one-touches puck back (6). X1 then turns up ice (toward the attacking goal) and opens up toward O3 in a good puck-support manner, presenting a good target while skating forward with stick in front of body. O3 then passes puck to X1 (7), who attacks the goal and tries to score.

Equipment: Two nets, several pucks and an ice marker to draw a circle in the slot for the player to skate around.

Comments: This is a great drill to teach proper passing, pass-reception techniques and communication. Eye contact between both passers in this drill is critical. Good cue words for the players in this drill may be: “Show where you want it” and “Tell them when you want it.” Explain to the players that it is the responsibility of the pass receiver to show the passer where to pass the puck. The receiver’s stick blade should be presented on the ice in a clear, visible lane approaching the passer at a good angle and controlled speed. Have the receiver vocally call for the puck when he or she wants the puck delivered. Another teaching point here is “strong stick.” Encourage the player to have a firm bottom hand on their stick which will allow them to one-touch the puck back hard and flat. Last but not least, players in line must be ready and engaged mentally to make good quality and timely passes when and where the receiver wants it. 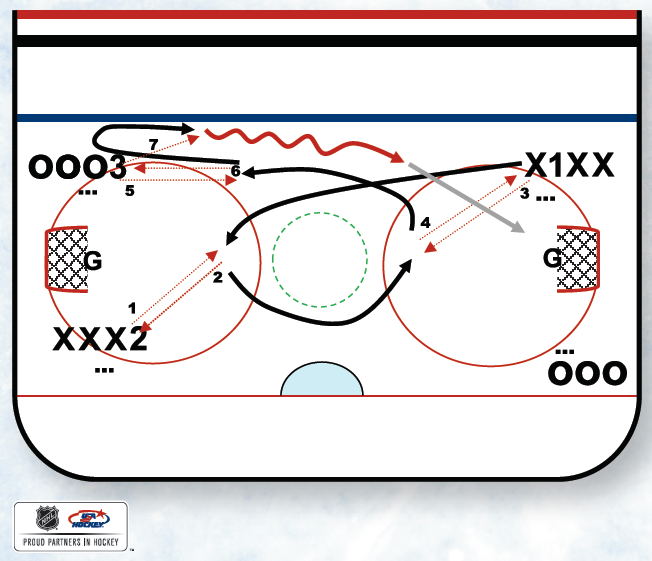