One of USA Hockey’s greatest initiatives is to provide everyone an opportunity to give the sport a try, regardless of age or background.

That commitment was especially evident Jan. 17 at the Pepsi Center in Denver, home of the Colorado Avalanche, as 45 blind and visually impaired individuals ranging from age 4 to 76 took part in Denver’s first Try Blind Hockey Day. Staff members from USA Hockey and the Avalanche provided equipment and on-ice instruction. Like other Try Hockey days, the event was free of charge and open to players of all skill levels.

“Our goal was to get everyone in any capacity on the ice, whether it’s with a visual impairment or sled hockey or special hockey,” explained Doris Donley, vice president of adaptive hockey for the Colorado Amateur Hockey Association (CAHA). “You’re never too young and never too old to learn the sport of hockey. Really and truly, it is for everyone.”

Two years ago, Donley met with Craig Fitzpatrick, who helped form the Washington D.C. Wheelers, one of nine blind hockey programs in the United States. With additional assistance from the Avalanche, the Colorado Center for the Blind, and several members of the CAHA, plans for Try Blind Hockey Day slowly but steadily began to gain momentum. The group’s desire was to follow the same model as Try Hockey for Free Day, and make it accessible to the blind community.

“We figured it’s the perfect model to use for anything, including blind hockey, because it’s an introductory program for people to try hockey for the first time,” explained Rui Encarnacao, program manager of amateur hockey development for the Avalanche.

Word began to spread to blind individuals throughout the Denver area. Coaches from men’s, women’s, youth and special hockey programs all over Colorado pledged their support.

Except for a few minor modifications, blind hockey closely resembles the regular game, Fitzpatrick says. The puck is made of steel, and is about three times the size of a regular puck. It contains ball bearings that make a jingling noise so players can hear it. Goalies must be completely blind, or wear blindfolds if they have low vision. The net is also smaller, six feet wide by three feet high.

“There are no breakaways in blind hockey,” explained Fitzpatrick, who is legally blind from a retinal disorder called Stargardt disease. “That’s because everybody’s vision levels are a little different. You have to complete one pass inside the offensive zone before your team can score. When that pass is completed, and it’s got to be a clean pass, there’s a pass whistle that blows to let the low-vision defenders and blind goalies know that wherever the puck is, there’s a shot coming soon.”

On the day of the event, volunteers arrived early for a short briefing on blindness and how to assist the players. Matt Morrow, executive director of Canadian Blind Hockey and sport director of the International Blind Ice Hockey Federation, led the session.

“I got everybody to close their eyes and I’d say, ‘OK, I want everybody to point over there,’” said Morrow. “Of course, everybody points in a different direction and laughs. The whole point of that is to point out so much of what we use in language is not useful to an athlete who is blind. It needs to be forward, backward, left, right … it needs to be descriptive language.”

Each participant was paired with a sighted volunteer, who stayed with them through the entire event. The players were divided into two areas of the ice according to their experience level, followed by a half-ice scrimmage at the end.

Those who had never skated or played the game were not introduced to the puck until the last half-hour. At that point, they learned how to pass with their partner and other players, then practiced skating with the puck. Attendees got a real treat when Colorado Avalanche forward Dominic Toninato, a graduate of the University of Minnesota Duluth, made an appearance and agreed to take part in drills wearing low-vision simulator glasses. All participants received an Avalanche jersey, along with two tickets to the team’s next home game.

The event was such a hit that Donley and her staff secured ice time for a learn-to-play program. A total of 25 players attended the first session.

“That’s insanely successful within our sport,” Fitzpatrick said. “Because of how well Doris and the Colorado Amateur Hockey Association not only planned the event itself, but also had a follow-up plan for how to take the success and immediately roll it into building a team. I’ve never seen anything like it. When we find enough people around the country that I feel will have sustained programs, then I’ll feel like we’ve arrived.”

If the response from Denver’s event is any indication, that vision may come to pass sooner rather than later. 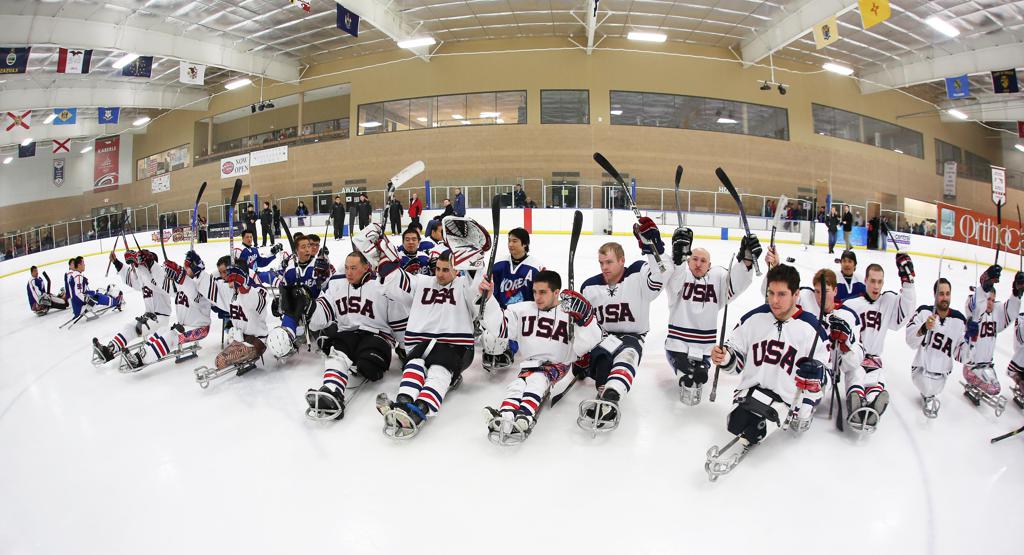 Behind The Glass Features