This drill encourages proper puck support and creativity for the forwards

Purpose: Create a hectic, fast-paced environment so your defensemen learn to transition the puck in the neutral zone with crisp, accurate passes while keeping their heads up and eyes on the play.

Also, this drill encourages proper puck support and creativity for the forwards.

Drill Structure: Set one net facing center ice above the tops of the circles but below the blue line in the middle of the ice. Also, draw or explain to players a dotted goal line from board to board at the net. If the puck crosses this line, the puck is dead and the coach passes another puck in to resume play. Play 3v3 with two defensemen below the opposite blue line from the goalie. These defensemen will regroup both teams.

Object: Play 3v3 in the neutral zone. Team that possesses puck must regroup with the two defensemen. The offensive team must move to support the D and accept pass on the defensive side of the red line. You can add an offside rule at the red line if desired. If the defending team steals the puck, they automatically regroup with the D and the drill repeats itself. If Team X shoots the puck wide or the goalies freezes the puck, coach passes another puck to the D which now regroups with Team O for offense (see example).

Coaching Points: Work with your defenders on proper puck movement in the NZ, using the D-to-D pass or the quick option of an immediate head-man pass. Remind your D to not stand still while making passes in open ice; keep moving. This drill requires the D to pay attention to the play and know what team is on offense after turnovers. Quick transitions lead to good scoring chances. Also, work with your offensive forwards to hustle back on the defensive side of the red line and get open for a short puck support pass. 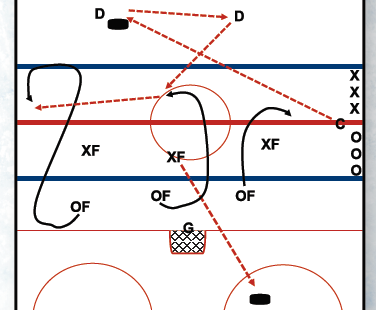