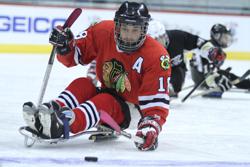 PLYMOUTH, Minn. -- Erica Mitchell is a 21-year sled hockey veteran, but she started out playing wheelchair basketball when she was a youngster. It was a sport that just didn’t feel right for her. With sled hockey, she feels free.

“I liked to sit on a skateboard all the time and kind of push myself around to get around when I was little,” Mitchell said. “So then once I found sled hockey, this is my sport. This is what I want to do. It’s comfortable.”

Mitchell is part of the Chicago Blackhawks Tier I division team skating in the eighth annual USA Hockey Sled Classic, presented by the NHL Nov. 16-19 in Plymouth, Minnesota, just outside of Minneapolis. More than 300 athletes are part of the tournament, including 15 members of the U.S. National Sled Team. All teams are represented by a record 20 National Hockey League clubs, including the host Minnesota Wild. Last year, the Nashville Predators hosted the tournament.

The Blackhawks were one of the first four teams to participate when the Sled Classic started in 2010, and they won the Tier I division in 2014. Now, the tournament is up to a record 28 teams over five tiers.

“So it’s definitely grown in the past seven years,” Mitchell said. “Going from four teams to different tiers is amazing.”

In their first game to open play Thursday night, the Blackhawks beat the Boston Bruins, 12-1. Josh Misiewicz led with four goals. Forwards Brody Roybal and Travis Dodson each had six-point games with two goals and four assists each. Kevin McKee added five points with a pair of goals, and Mitchell scored the final goal of the night with under two minutes left to cap her four-point night.

Mitchell played on junior sled hockey teams in her youth and started playing with the Blackhawks 10 years ago. She is one of the few women in the male-dominated sport, where she says there are usually maybe one or two women per team.

“It can be intimidating at first, but then you just get into the game”, Mitchell said. “You’re just like the guys out there. It’s fun.”

Almost all of the women in the Sled Classic also play on the U.S. National Women’s Sled Team, including Mitchell for the past 10 years. Mitchell is a forward with the Blackhawks, where she enjoys passing the puck around and racking up assists when she can. She is a defenseman when she plays for the national team, however, which she prefers because the checks are different.

“I play everything but goalie,” Mitchell said, with a laugh.

The women’s team hopes to continue growing and be part of the Winter Paralympic Games by 2022. Right now there are just three teams — USA, Canada and a combined Team Europe. The Paralympic sled hockey tournament changed from men-only to a mixed event starting with the 2010 Winter Games, but to date, no women have taken part.

Mitchell’s teammate Dodson competed at the Sochi Games in 2014. He’s a Paralympian in Nordic skiing and biathlon. He is also a retired Marine Corps Lance Corporal who was injured in 2007 while serving a tour in Iraq.

Dodson is in his third year with the Blackhawks, and he hadn’t played any kind of hockey before that. Growing up in New Mexico, hockey was “just so miniscule down there in the desert,” Dodson said.

He came to Chicago for wheelchair racing after his injury and eventually found sled hockey. It was his time in Sochi where he really became aware of the sport, as he watched the U.S. National Sled Team win gold.

“That piqued my interest,” Dodson said. “And then I kind of realized, OK, this is a sport I should be doing.”

Once he was back in Illinois, he wasn’t sure how to get involved, but a friend happened to be volunteering with the Blackhawks.

Dodson said he really loves the speed and physicality of sled hockey, plus it being a team sport. It was a change from the more individualized sports like wheelchair racing and biathlon, where he trained by himself for hours. Now he practices with teammates.

Though the Sled Classic has seen exponential growth, Dodson would like to see the sport grow even more with teams nationwide. He’d love to see teams “pop up in different cities.”

“Because the sport’s so good,” Dodson said.

And it’s all on display this weekend in Minnesota.