High school hockey has a surprisingly rich history in Texas, dating back to the 1920s, but like much of the state’s hockey history, there were stops and starts along the way. Houston’s Interscholastic Hockey League has been adding its chapters to that history since 1997, making it one of Texas’ most enduring prep hockey fixtures. 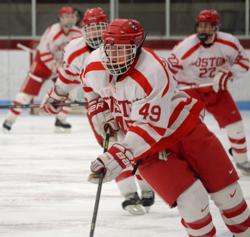 The league began as an icy outlet for roller hockey enthusiasts caught up in the wheels-and-asphalt craze of the mid-1990s. But steel blades proved to be more than a passing fad, and the fledgling ISHL grew from just a few teams to 18 by its third season. That’s when Pierre Judge moved to Houston from Quebec, along with his wife and their two young children. A decade later, Judge was serving on the ISHL board of directors and his sons were playing in the league.

“Roller hockey was big on the west side of Houston,” said Judge, who finished a second term as ISHL president in 2016. “Then those kids decided to start playing ice hockey almost overnight.”

Twenty years later, the ISHL is still going strong, providing players with an opportunity to skate for school pride and camaraderie deep in the heart of Texas. Today’s ISHL is a nine-team, 180-player circuit at the varsity level, with 100 more players skating in its junior varsity league. For some of the players, it’s their only hockey team. Others double dip with a high school team and a travel team. One of the more storied double-dippers was Riley Marotta, a 2013 graduate of Seven Lakes High School in Katy, Texas.

A three-sport import from New York by way of Northville, Michigan, Marotta moved with his family to Texas after his sophomore year of high school. He found a fit with the Houston Wild travel hockey program and the ISHL.

“Hockey in Houston is kind of like football in the Northeast; it’s just tough for it to compete with football, baseball and basketball,” said Marotta. “But I didn’t want to give it up. The ISHL was something I could play in addition to travel hockey. A lot of the kids were transplants who moved to Texas for parents’ jobs, like me. Quite a few of them played travel hockey and also played in the ISHL, but they were all spread out, so it was fun playing against each other in high school and with each other in travel.”

Marotta played center during his first season with Seven Lakes, helping spring a memorable upset in the ISHL playoffs.

“Our team wasn’t spectacular, and we had a rival – Cinco Ranch High School – that was just five minutes away from our school, and I always heard stories about how we could never beat them,” recalled Marotta.

The bitter Katy foes met in the city semifinals, with Seven Lakes rostering only 17 skaters. Marotta scored a put-away goal late in the second period and goaltender Ryan Buczkowski turned aside 24 of 25 shots in a 4-1 triumph.

“Beating Cinco Ranch, as a heavy underdog, was definitely one of my fonder memories,” said Marotta.

But his junior season was merely a hint of what was to come. He returned as a senior, playing defense for the first time in his life and scoring three goals in his first game. He scored two more goals in his second game. Next came another hat trick, then another two-goal game. It was surreal. Marotta continued scoring at a torrid pace through December and January, racking up 32 goals in 13 games. Then came a Sunday matchup with Kingwood/Tomball when Marotta, still playing defense, scored eight goals – an ISHL single-game record.

“It was just one of those things that kinda happens,” he said. “You don’t go into it saying, ‘I’m not going to pass,’ especially because I played defense. But almost every time I had it, I took it.

“I remember we had a 2-on-0 when I already had eight and I could have went for the ninth, but I ended up dishing it off to my teammate at the last second. He scored, so I ended up with eight goals and an assist that night. It was crazy. You get those playing on the backyard rink and you think you’re awesome. To have it happen in an actual game was pretty special.”

For an encore, he scored seven times in his next game, which brought him to 47 goals on the season. After a two-goal game on Feb. 11, he skated into the regular-season finale against Clear Lake High School knowing the ISHL single-season goal scoring record (53) was within reach, but still improbable.

“It wasn’t like I had set my goal to beat that mark, but friends started telling me about it, and that put it on the radar,” said Marotta. “Once kids started mentioning that I was close, it definitely gave me a little extra motivation.”

Judge, whose son, Oliver, played goalie for Seven Lakes, was in attendance. He recalled an early save when the opposing goalie taunted Marotta ever so subtly.

Marotta soon evened the score at 1-1 with his 50th goal of the season, a shorthanded marker. Less than two minutes later, he scored again. Midway through the second period, Marotta completed his hat trick on the power play. Then he scored with 1:13 remaining in the period to tie the ISHL single-season record.

His 56 regular-season goals became the new ISHL target for single-season goals and goals by a defenseman. His high-scoring exploits continued a month later at USA Hockey’s Youth Tier II 18U National Championships, where Marotta piled up a tournament-leading eight goals and 12 points for his travel team.

“I’m happy the ISHL record is still there, but I’m sure someone will come along and break it in a couple years,” said Marotta, who went on to play four years of ACHA club hockey at Boston University, captaining the squad last season before entering the adult hockey ranks and graduate school at Tufts University.

What he remembers most about the ISHL isn’t the records; it’s the camaraderie.

“The ISHL is a lot more about that and the team aspect than about the competitive aspect,” said Marotta. “It’s about being a part of your high school team; getting that letter jacket. It’s definitely something fun, and it helps expand the sport of hockey in Texas.”

“It’s entertaining, it’s a good show and it’s fun to watch,” he said. “When kids see that their parents saw them do something good on the ice, they like that. It builds good relationships within families and it teaches life lessons. Plus, the ISHL is a tight community. A lot of our personal friends came from hockey families in the Houston area.”

One of those friends is Russ McKinnon, the ISHL’s current president, who’s helping pilot the ISHL through its 20th anniversary season and into the future. Also a Canadian transplant, McKinnon moved to Houston from Edmonton in 2002. He continued playing adult hockey, eventually inspiring his children to play, and they’ve since progressed through the ISHL while also playing high school tennis and soccer.

“Playing travel hockey would have meant going to Dallas or Austin every weekend, and my kids wanted to enjoy other activities in addition to hockey, so travel just didn’t work,” said McKinnon. “The ISHL is much more of a community perspective; travel is more ‘us versus them,’ a competitive focus. But at the end of the day, hockey is fun and kids just want to have fun with other kids, and that’s what the ISHL gives them.”

That’s not to say there isn’t a competitive, developmental component of the ISHL, which is something McKinnon is actually looking to expand. The two most visible examples are the league’s new select teams and a special training program, inspired by USA Hockey’s American Development Model, which provides junior varsity prospects with seven auxiliary skill development sessions during the season. The select team initiative assembles two teams of top players for extra best-on-best matchups.

“When kids are better at the game, they enjoy it more and keep playing longer, hopefully into adulthood, so that’s what we’re trying to create with the new programs,” said McKinnon. “We want to push the organization to cater to more kids and expand the focus a little.

“For what Houston is now, to grow hockey, the focus needs to be player development, team development and leadership.”

The ISHL aims to continue providing all three as it embarks on a third decade in the Lone Star State.