Adult Hockey Surging in the Southeast

Learn more about hockey’s popularity in the Southeast 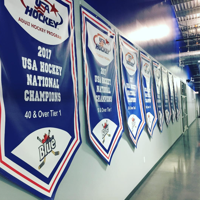 Over the last two decades, professional hockey has gained a concrete foothold throughout the Southeastern United States, an area known more for mild seasons filled with sunshine, sandy beaches and spring training baseball.

Teams like the Carolina Hurricanes and Tampa Bay Lightning – both Stanley Cup champions – along with the Nashville Predators and Florida Panthers have helped shine the spotlight on our sport’s stars, and encouraged a new generation of athletes of all ages to put on skates.

To learn more about hockey’s popularity in the Southeast we chatted with Marc Friedman, USA Hockey’s Southeastern District director, as well as treasurer for the Statewide Amateur Hockey Association of Florida (SAHOF).

USA Hockey: How did you get started in hockey and how did your family fall in love with the game?

Marc Friedman: Both of my boys played hockey from 8U thru 18U and my wife, Cindy, is a USA Hockey associate registrar. I never played as a kid, but I learned to skate (so I could be more involved with my kids) and also played for a short time. It’s never too late to lace up the skates.

My wife and I have both been in our positions with USA Hockey for about 20 years. Additionally, I coached my younger son’s rec and travel teams for about 12 years and, at one point, I played on the same team as my older son. That was a thrill!

USA Hockey: How has hockey's overall popularity in the Southeast grown over the years?

Friedman: I’ve been in South Florida since 1975 – long before the Florida Panthers got here in the mid-1990s. The Capitals have been in Washington since the late 1970s and had a great following. This led to the emergence of the Lightning, Predators, Panthers and Hurricanes in the 1990s. The camaraderie and excitement of the sport throughout the Southeast has led to a huge surge in fans and players alike.

USA Hockey: What's the best thing about your job?

Friedman: Being on the Adult Council is probably the best “job” I have. Our main concerns are keeping adult players happy so they’ll play longer and stay involved. We’re fortunate to work with a great group of people from around the country and several dedicated members from USA Hockey’s home office, which really helps grow our membership. Several affiliates in the Southeast sponsor adult tournaments and learn-to-skate classes and even organize adult NHL events to keep our adult participants involved in the sport. It’s been great to see the success we’ve had.

USA Hockey: How has the adult hockey game grown over the years?

Friedman: We currently have more than 22,000 adult players here. Several Adult Classics are played throughout the district, and all of the Adult Nationals are held in the Tampa area, including those for players who are more than 70 years old. It’s important to us that our adult players have the opportunity to continue playing with their friends at a level they’re comfortable with, whether that’s in leagues, tournaments or pickup games.

Best of all, it all takes place in refrigerated arenas, which is a lot better than being outside melting in the Southeastern sun.

USA Hockey: Speaking of weather, how did Hurricane Irma affect your district?

Friedman: Recently, South Florida suffered some damage from Hurricane Irma. We’ve had some rink damage and a few games had to be rescheduled, but things are back on track at this point. The Panthers and the Lightning both stepped up in helping with the recovery effort. Food, water and supplies were collected and physically driven to the areas where they were needed. It was good to see the hockey community pulling together to help out their neighbors.

USA Hockey: For those reading who haven't made the jump from the stands to the ice, what would you say?

Friedman: Hockey is more than the on-ice experience; we’re living proof. Although my boys haven’t played in more than 10 years, my wife and I are both heavily involved in it. We love the sport, the people we work with, and the overall feeling you get when you walk into a rink. In fact, most of our friends today were part of our hockey family back then – and that was more than 20 years ago!

Hockey offers a place for every skill and commitment level so, if you’re not already involved, head out to your local rink, enjoy a cool game and the great weather inside!