Elsewhere in USHL, Bischel the hot hand in net for Fargo Force

Bliss scored in his seventh straight game, providing a goal and two assists for the Green Bay Gamblers in a game they eventually won over the first-place Chicago Steel, 6-5, in a shootout.

Chicago, the defending USHL champion, had been on a six-game winning streak. The Steel still leads the conference with a 7-2-0-1 record.

Green Bay used a comeback, then held off a Chicago comeback to improve to 6-3-2-0 and move within a point of the Steel.

The Gamblers scored the next four goals, taking a 5-3 lead on a goal by Bliss at 6:10 of the third period.

The Steel, which got two goals and two assists from defenseman Graham Lillibridge, rallied to force overtime.

Once the game went to a shootout, Chicago scored on three of its five attempts while Green Bay scored twice.

Bliss, who played his high school hockey in nearby Appleton and is a University of Wisconsin commit, has multiple points in four of the games during his streak, giving him five goals and eight assists in the seven games. 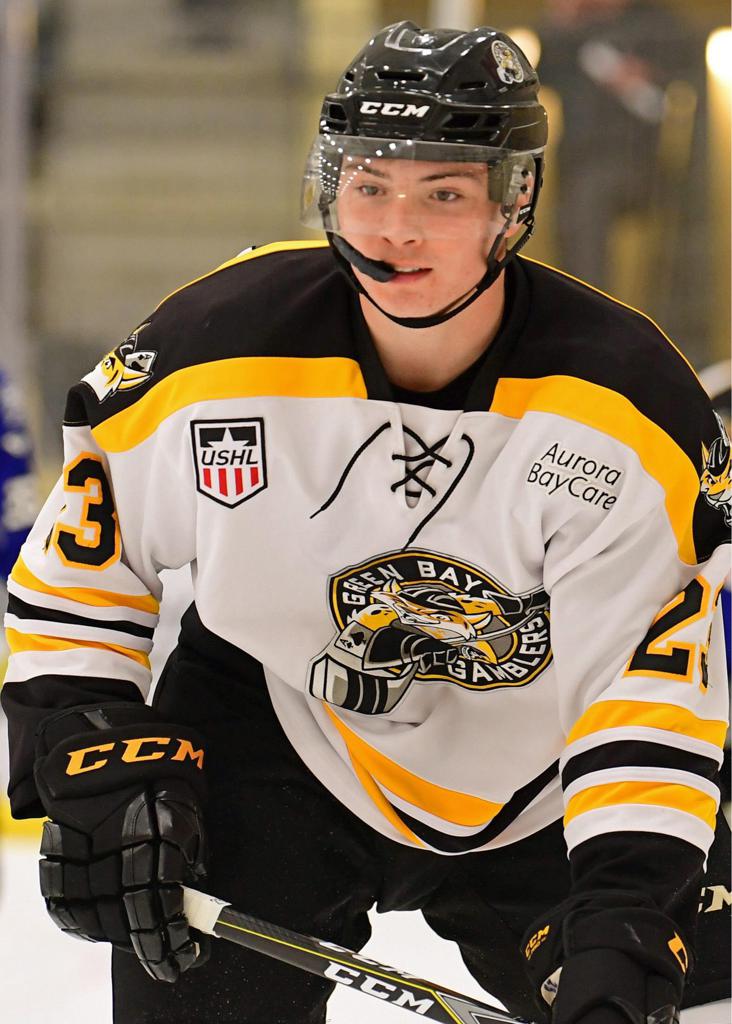 The Minnesota native and Clarkson commit made 23 saves in a 5-0 win over the Cedar Rapids RoughRiders. He kept his winning streak alive the next night with 25 saves in a 6-3 victory over Waterloo.

The Tri-City Storm share the conference points lead and have the league’s best winning percentage with an 8-1-0-0 record after sweeping a road series, 3-2 and 4-2, from the Muskegon Lumberjacks for their sixth straight win.

The Storm have succeeded with defense and balance.

Tri-City has allowed just 15 goals, and at 1.67 goals per game is the only USHL team allowing fewer than 2.5 per game. The offense does not have a player with more than four goals or eight points.

Chicago and Tri-City were 1-2 in the usahockeymagazine.com Power Rankings as of the start of November. Chicago moved up from second a month ago while Tri-City climbed two spots from fourth. Waterloo dropped from first to sixth.

NAHL NOTES: The Wilkes-Barre/Scranton Knights used a three-game sweep of the first-place Northeast Generals to close within one point of the North American Hockey League East Division lead.

Jack Olmstead, Wilkes-Barre/Scranton’s season scoring leader with 21 points, played a role in each of the wins while helping the team improve to 7-0-2 in the last nine.

Olmstead scored in Friday’s 5-3 win, had the game-winning goal and an assist in Saturday’s 3-2 victory and had two more assists in Sunday’s 4-1 win.

Nathan Burke scored the game-winning goal for the Aberdeen Wings in Friday’s 2-1 win over Minot, then came back Saturday with two goals and two assists in a 7-1 romp over the Minotauros.

BIG LEAD: The Jersey Shore Wildcats expanded the North American 3 Hockey League’s biggest divisional lead to 10 points over the rest of the Northeast when they won their seventh straight, 9-1, over the host Skyland Kings Sunday.

New Jersey native James Lowry had two of the five first-period goals for the Wildcats, who outshot the Kings, 55-11.

ONE-TIMERS: T.J. Polglaze, a forward for the NAHL’s Janesville Jets from nearby Beloit, Wisconsin, has committed to play at Michigan Tech University … The Valley Junior Warriors will host an Eastern Hockey League Showcase at the Haverhill Valley Forum with eight games scheduled for Sunday and eight more on Monday. … The defending champion Pikes Peak Miners have won five straight Rocky Mountain Junior Hockey League games after Patrick Alldredge scored six goals total and both Jacob May and Ian Zaleski recorded hat tricks in an 8-2, 10-2 sweep of the Colorado Rampage.