This is on full display during USA Hockey’s summertime development camps, when several CEP instructors and coaches-in-chief shift from the classroom to the ice, leading station-based practices and camp games for the nation’s top young players.

One such coach-in-chief is Doug Dietz from the Central District. His territory includes Illinois, Iowa, Kansas, Missouri, Nebraska and Wisconsin, but last week he was in New York, coaching Team Black at USA Hockey’s Boys Select 16 Player Development Camp.

For Dietz, the camps are a great time to put coaching theory to the test. The transition, he said, is designed to be seamless.

“It really comes naturally as a camp coach and as the district coach-in-chief,” said Dietz. “What you’re trying to teach youth coaches in the clinics, you implement naturally as a coach here at the development camps.”

As it turns out, those clinical best practices are proven winners in practical application, too, built on American Development Model principles and designed for maximum transfer into real-life game situations.

“It’s really fun to watch the players play in the evening games and see how often they encounter the same types of situations that we created for them in our practice structure,” said Kenny Rausch, USA Hockey's director of youth hockey. “Training in this kind of practice structure over the course of their young hockey lives will produce players with higher hockey IQ and better game habits. Competing in small areas happens all the time in games, so practice should mirror game situations as much as possible, which is a common theme of both the ADM and the CEP.”

During boys development camps, the typical practice structure begins with a free-form passing progression and then a quartet of small-area games, each focused on specific tactical aspects.

“Practicing in small areas makes the game easier for players when they’re competing in actual games, because they’ve become accustomed to a quicker pace and quicker decision-making,” said Mark Tabrum, director of USA Hockey’s Coaching Education Program. “They apply what they learn in the morning practices to the games later in the day.”

The second camp practice is a skills-specific session in which the forwards and defensemen split into separate halves of the ice and work on the finer points of their position-specific skills. During these sessions, proper playing habits are emphasized in each of the station-based drills. The final practice incorporates more team concepts and small-area compete drills that help players succeed now and in the future.

Dietz and his fellow coaches are especially focused on creating high-quality practices to maximize skill development.

“As a coach, your gameday is practice,” he said. “We have to build and lead great practices, and have great communication with the players, so that they can play their best on their gamedays. Hopefully that’s the message every coach at every level of our CEP is getting, because that’s what will help these players truly reach their full long-term potential.”

After that, it’s all about helping a disparate group of players from all over the country become a true team in six days, or hopefully fewer. Said Dietz, “We want to help the kids bond as quickly as possible so that they can continue to grow and achieve throughout the week.”

The coaches pursue that goal in part with a variety of off-ice activities and competitions, most of them active and some a bit zany. But there’s a definite motive to the madness. Not only does it bring players together, it also helps enhance their athleticism and decision-making. Above all, it’s fun – at least, it’s fun after getting past the initial awkwardness.

John Farinacci, a 16-year-old forward from New Jersey, remembers the surprised looks on his teammates’ faces during their first encounter with the PDC off-ice program at last year’s Boys Select 15 camp.

“There are a lot of quirky things that happen as ice-breakers, especially on that first day, when you’re pushed out of your comfort zone a little bit, but after you get over that initial hump, everything smooths out,” he said. “And it’s definitely effective. Without those little games, it would just be playing hockey with everyone, but with the off-ice activities, you get to know the guys and build relationships and build trust.”

Farinacci’s first camp included a memorable wiffle ball game, and this year, at the Select 16 camp, he navigated a minefield of pucks in a parking lot – blindfolded, of course – with only verbal instructions from his teammates to help. After that, navigating the ice seemed easy. Farinacci did it especially well, finishing as the camp’s leading scorer (10 points in five games) en route to earning a spot on the United States Under-17 Select Team.

And that’s the camp’s true goal – to boost players toward their full potential.

“The entire experience, for the players, is about continuing to enhance their game on and off the ice,” said Tabrum. 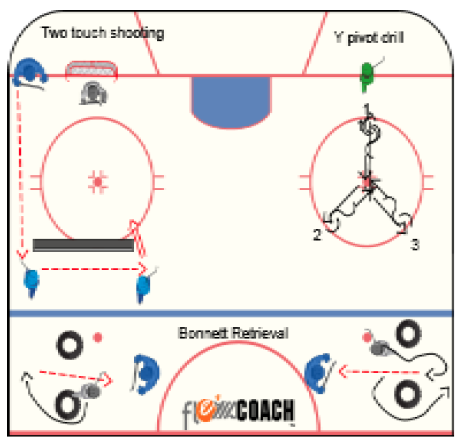