Every four years USA Hockey’s playing rules are evaluated and have the opportunity to be changed. With this being a rules change year, the USA Hockey Board of Directors voted on a number of proposed modifications during Annual Congress.

Perhaps the most notable rule change gaining approval was the elimination of the ability to ice the puck when shorthanded for age classification 14U and younger. The Board also voted to strengthen language around the game misconduct penalty in Rule 601, with the new verbiage stating that a game misconduct penalty shall be issued to any player or team official who uses language that is offensive, hateful or discriminatory in nature anywhere in the rink before, during or after the game.

“I believe overall everyone feels our game is in a really good place,” said Jim Smith, president of USA Hockey. “The most important thing we need to focus on is our current rules in place. Our officials play such a big role in the overall safety of the game and we appreciate their efforts to fully enforce the current standard of play that exists in the book.”

USA Hockey has modified its playing rules for the 14-and-Under age classification and all younger age classifications (youth and girls) to no longer legalize icing while a team is shorthanded. Beginning with the 2017-18 season, if a team ices the puck while shorthanded, it will result in a whistle followed by a defensive-zone faceoff. The team that commits an

icing infraction will be allowed to change lines and/or players prior to the defensive-zone faceoff.

The rationale behind this rule change is twofold.

First, and most importantly, the change will encourage greater skill development for 10U, 12U and 14U players. These young athletes are in their prime skill development windows and will benefit greatly from the increased emphasis this rule change places on promoting puck possession, puck protection and play-making (as opposed to merely firing the puck down the ice, which is a low-skill tactic). Second, the change prevents a penalized team from gaining an exception to a rule (icing) that is in effect while teams are at even strength.

“We want to encourage players to get their heads up, think and make skillful, intelligent plays,” said Ken Martel, the technical director of USA Hockey’s American Development Model. “To develop problem-solving skills, we need rules that encourage players to think. Modifying the shorthanded icing rule will accomplish that. Rather than just blasting the puck down the ice, they’ll now be encouraged to skate or pass their way out of trouble, use greater touch to chip a puck out, or even take advantage of a lazy power play and go on the attack.”

Data collected from nearly 200 games played under this modified rule showed that the average number of shorthanded icings per game was only 1.81. Therefore, there were fewer than two stoppages per game due to this rule, which dispels the myth that it will ruin the flow of games and make them dramatically longer.

USA Hockey has successfully used this modified rule for more than 10 years at its National Player Development Camps. Players adapt almost immediately and more shorthanded scoring opportunities are created by the play-making mindset that it nurtures.

“Skill development and play-making is an emphasis at the professional level and it should be an absolute priority at the youth levels, so I support USA Hockey’s decision to change the rule,” said Mike Sullivan, Pittsburgh Penguins head coach and back-to-back Stanley Cup champion. “It will encourage kids to make more skill plays with the puck, and that will help develop their full potential as players.” 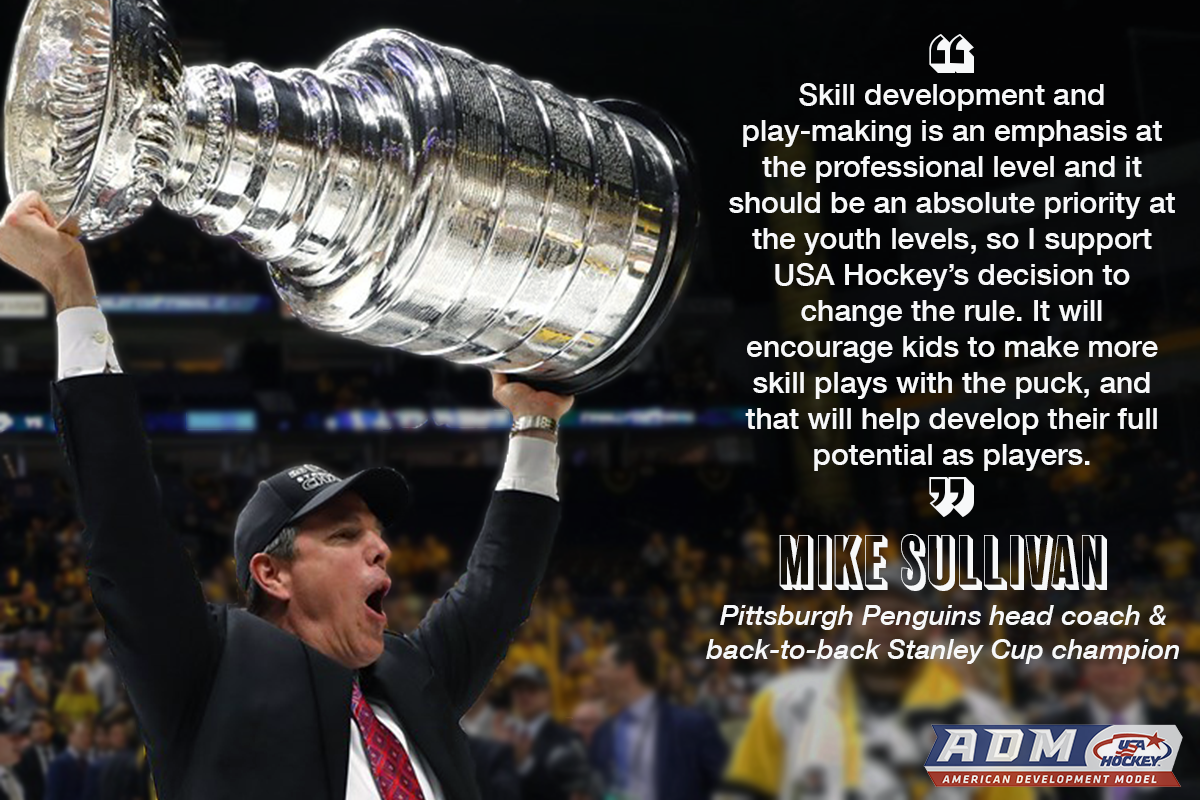 How a Rule is Changed