One of Dave Ogrean’s favorite sayings is: “It’s a lot more fun to build than to maintain.”

Ogrean, 64, has spent more than half of his professional career working at USA Hockey and is an icon in the field. His colleagues expressed gratitude for all he has done to make the organization what it is today.

“He’s been the guiding light,” USA Hockey President Jim Smith said. “If it wasn’t for Dave, we would not have many of the programs we have today. His people skills alone are probably the best in the industry. He has the unique ability to just make friends. Even though people might be on different sides of a particular issue, he just has a unique ability to sit down and discuss it intelligently, respectfully.”

Former USA Hockey President Ron DeGregorio, who is now chair of the USA Hockey Board of Directors, has known Ogrean for 40 years. He’s had a front-row seat to watch the impact Ogrean has had on USA Hockey during his tenure. 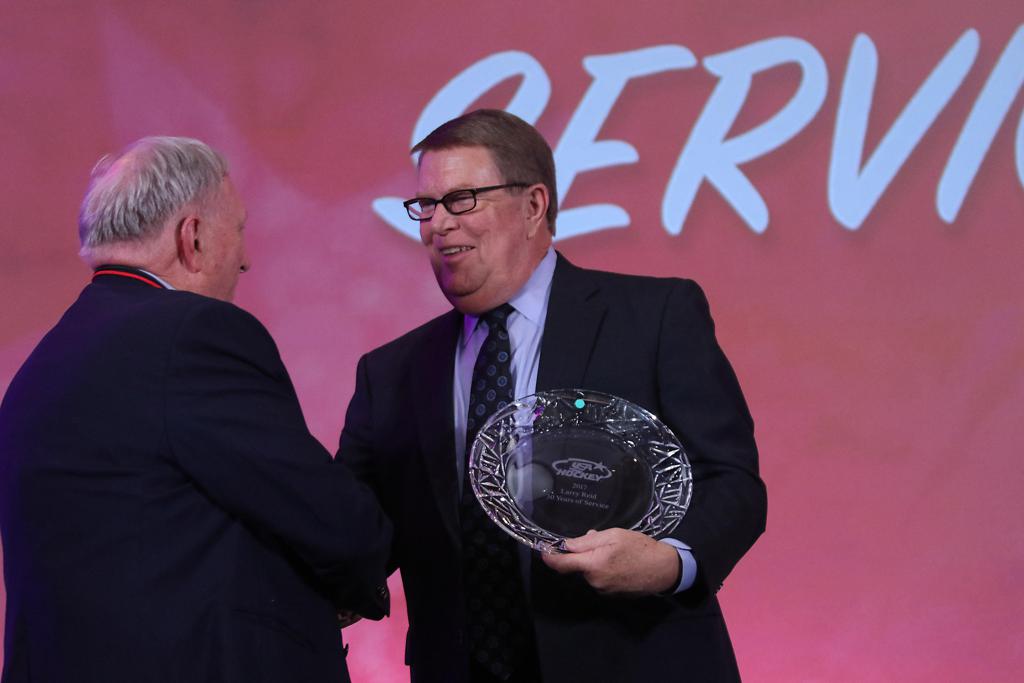 “You can have a strategic vision and strong strategic goals, etc., but you have to have them implemented,” DeGregorio said. “And you need leadership at the top to direct that progress of those strategic goals. We were very fortunate to have Dave at the helm with the great hires that he’s made and the great leadership that he’s given to those who are implementing the strategies that were established. We wouldn’t have made the progress we have without Dave’s leadership. Obviously, his relationships are so great. He’s smart. He’s fast. He’s easy to work with. That makes it fun in getting things done.”

Ogrean was hired as USA Hockey’s director of public relations in 1978, becoming the fourth person on staff. He spent two years in that position, a stint that included working the 1980 Olympic Winter Games in Lake Placid, New York, where the U.S. won gold in men’s hockey.

He left late that year for ESPN where he spent eight years, first in corporate communications and then in programming. Ogrean’s next steps included stints at the College Football Association as assistant executive director for television and as the first director of broadcasting for the U.S. Olympic Committee.

In 1993, USA Hockey President Walter Bush reached out to Ogrean to be the organization’s next executive director. He spent six years in that position before heading back to the USOC as the chief marketing officer. Ogrean followed that with stops at the Colorado Springs Sports Corporation as president and CEO, and transitioned to the NFL to start up USA Football.

In 2005, DeGregorio, who was the USA Hockey president at the time, contacted Ogrean when the organization’s executive director position was vacant. Ogrean thought about the chance to head back to Colorado Springs, a place where his kids grew up, most of his friends lived and where hockey was life. It was a great opportunity to go back home.

“I had just felt that the organization had continued to grow and I felt I in particular had continued to grow,” Ogrean said. “What I had done leaving in ’99 and to go to jobs at progressively higher levels, I think just broadened my whole scope of ability. I think I came back with better vision, more ideas, more experience in how to handle people, all those kinds of things.”

Ogrean’s nearly 20 years as executive director have been highlighted by great success on the international stage, along with significant growth and innovation that has led to USA Hockey’s emergence as one of the leading amateur sports organizations in the world.

“Probably without Dave we’d be 10 years behind where we’re at today,” Smith said.

While Ogrean was executive director, U.S. teams won 60 medals in major international competition, including 32 golds. In 2016-17, the U.S. became the first country to ever win four gold medals in major IIHF world championship play in a single season.

Ogrean was instrumental in championing USA Hockey’s implementation of the USOC’s SafeSport initiative and also substantially strengthened the organization’s relationship with the NHL.

"In guiding USA Hockey to the unprecedented heights it has reached, Dave Ogrean has been an energetic, visionary and global advocate for our sport,” NHL Commissioner Gary Bettman said. “More Americans than ever are playing and watching hockey, and the programs Dave championed have American players well-positioned for further advancement in the years ahead.

“There is a USA Hockey connection to every international hockey team that has represented the United States and every American-born selection made at an NHL Draft. While there is more work to be done, the foundation created under Dave's leadership means the future of U.S. hockey is bright. We cannot thank Dave enough for all he has accomplished. We wish him the very best."

It was difficult for Smith to narrow down to just one or two major accomplishments with Ogrean at the helm.

“The growth of the game, No. 1,” Smith said. “He’s been a big proponent of putting structures in place that will allow the game to be available to more individuals. He was a big proponent of disabled hockey and bringing that into the fold when some of the people thought it might be a little bit too expensive to go into that route. And I think a big accomplishment is his role in taking our NGB [national governing body] from where it was to where it stands today as one of the leading NGBs not only in the United States but anywhere in the world.”

DeGregorio believes Ogrean’s work in starting up the National Team Development Program in 1996 has been instrumental.

“That has helped us be on the map not only as a membership services organization, but also as a hockey development juggernaut,” DeGregorio said.

Ogrean might be retiring from his executive director position, but he won’t be stepping away entirely from USA Hockey. He’ll stay on as an advisor to the president, with particular focus on fundraising.

“We’ve got Pat coming in with ambition and passion and then keeping Dave around with his experience and his people skills,” Smith said. “I’m happy as president to have the best of both worlds.”