Chicago dominant on special teams throughout the playoffs 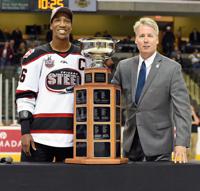 When Tyler Gratton scored 11:30 into overtime Tuesday night, he completed a special run to the Clark Cup title for the Chicago Steel with a 2-1 victory over the host Sioux City Musketeers in the fifth and deciding game of the Clark Cup Final.

With the playoffs coming down to a showdown between the United States Hockey League’s two regular-season conference champions, the Steel posted their second road win of the best-of-five series. The Clark Cup determines both the USHL postseason champion and the USA Hockey Tier I junior national championship.

Special teams were a big part of Chicago earning title.

They outscored opponents 14-6 in special-teams situations by connecting on 23.4 percent of their power plays, killing 89.1 percent of opposing power plays and offsetting the five power-play goals they allowed by scoring three times while shorthanded.

“On the power play, we have some special guys out there, a lot of guys that can move the puck,” said team captain Marc Johnstone, who was a big part of both units. “It’s not every day that you see guys that shoot the puck like Reggie Lutz and Brannon McManus. It’s nice having those two out there. There are other weapons out there, like [Eduards] Tralmaks, who had 10 goals in the playoffs and got three of them on the power play."

“The coaches did a great job scouting for us, giving us a look at what teams were going to try to do against us and all the guys bought into what we needed to do on the power play.”

Jack Badini, the overall playoff scoring leader, was the only USHL player with two short-handed goals in the playoffs. He led a unit that also dominated during the regular season when the Steel killed penalties at a league-best rate of 90.3 percent.

Johnstone, a New Jersey native, said much of the credit has to go to two hard-working defensemen.

“You can’t say enough about Adam Karaschik and Derek Daschke and how much they care,” the captain said. “Penalty kill is not as glorious as the power play, but you need guys like that to block shots."

“Badini, again, was great for us on the penalty kill with Jake Jaremko, Austen Long and [Gratton].”

The special teams advantage carried all the way through the finals against Sioux City, which had put together a league-best regular season record of 40-13-5-2.

The Steel and Musketeers went into the week tied at 1-1.

They split weekend games in Chicago before deciding the series.

Steel goaltender Ales Stezka made 27 saves in his third shutout of the playoffs Friday and Johnstone had two assists, including on Badini’s goal to open the scoring in the first period.

Sioux City earned a chance to decide the season at home by coming back from a two-goal deficit the next night for a 5-4 win.

Odeen Tufto started the comeback with 44 seconds left in the second period.

Eeli Tolvanen tied the game with 2:53 remaining and Kristian Pospisil, who had assisted Tufto, scored the game-winner with 1:09 remaining.

When the entire season came down to one game, the Steel put all of their playoff strengths together for one last championship performance.

The USHL’s most productive playoff line combined with strong goaltending and outstanding special teams play to put Chicago in position to pull out the win on Gratton’s goal.

The teams combined for more than 36 minutes of scoreless hockey before the winner, and Stezka kept the Musketeers off the board for more than 60 minutes after Carson Vance gave Sioux City a first-period lead.

Stezka finished with 45 saves and combined with the penalty-killing unit to keep Sioux City from taking advantage of the game’s only two power plays in the first and second periods.

Tralmaks tied the game in the second period on assists from Johnstone and Badini. For Tralmaks, the Clark Cup Most Valuable Player, the 10th goal of the postseason tied for the most in the USHL’s Tier I era. Johnstone finished as the playoff assists leader, while Badini led in points.

Playing in front of a sellout crowd at the Tyson Events Center, the Steel looked elsewhere for the winner and its first Clark Cup championship.

Gratton, a three-time USA Hockey National Player Development Camp invitee, got a shot past Musketeers goalie Matiss Kivlenieks to end the series, claim the Clark Cup and put a wrap on the U.S. junior hockey season.

Hockey families near and far stepped up following March 3 storm