When Statewide Amateur Hockey of Florida Girls and Women District Director Jane Solverson did some research, she discovered a most interesting fact about girls hockey in Florida.

“Jane learned that, at no point, has any rink in the history of Florida had two all-girls rec teams play out of the same venue at the same time,” said Doug Wemple, RDV Sportsplex Ice Den hockey manager. “In Florida, girls hockey is in its infancy stage compared with some other states.”

Wemple assumed his current position in 2014, at a time when there were only a few young girls playing hockey. All played on boys teams.

“I had some parents approach me and ask if it would be possible to get these girls playing together,” Wemple said. “The first year, we tried to get enough girls for a 10U team, but we only had around nine, so we had to add a handful of boys.

“Over the next few seasons, we continued to grow, and for the 2017 winter season, we were finally able to put together not only one but two all-girls teams. After our fall season, I looked at our numbers in December and it looked like we had the potential to field two teams.”

According to Wemple, the response was “overwhelming and parents loved the idea.”

After evaluation the situation in January, two teams were formed: the 12U Wolverines and the ages 12-to-17 Knights. Each team is coached by Sondra Pacey, who is assisted by her husband, Stoan, plus Cierra Romaldo and Scott Glazier.

“The unique thing was each team consisted entirely of girls,” Wemple said. “On January 29, both girls teams played, which was the first time they played in our house rec program.”

“If we have 24 girls or more in a specific division, we’ll split them into two teams so they can have girls teams play girls teams,” Wemple said.

With the help of Sondra Pacey, who Wemple said “always had a passion for girls to play hockey,” the Ice Den commenced ways to grow the game instead of standing pat.

“The cool thing about our program is that the older girls come out and help the younger girls. There is a lot of camaraderie among them when it comes to growing girls hockey in a non-traditional hockey market.”

Events of this nature aren’t new at the Sportsplex, which implements numerous USA Hockey grow-the-game initiatives, and this past October, offered a try-hockey-for-free day as part of IIHF World Girls Ice Hockey Weekend.

“We always promote girls hockey and say, ‘Invite your friends,’” Wemple said. “We have winter, spring and summer learn-to-play sessions. We’ve seen a good number of girls come in and participate. That’s where we try to connect with them at the grassroots level.

“We also play cross-ice hockey, which is part of USA Hockey’s American Development Model at the 8U level.”

Another way the Ice Den helps grow the game is by participating in USA Hockey’s 2 and 2 Challenge. This is a comprehensive growth program available to all USA Hockey associations that register 8U players. The program is a blueprint that supports youth hockey leadership with national initiatives and tools to achieve the goal of acquiring two new players and retaining two additional players each season.

The bottom line is for an association to establish itself not just as the best local hockey program, but also the best youth sports option in the community.

“We’ve taken part in the challenge and achieved gold status,” Wemple said. “We’ve treated ice as an open skate where girls and their friends can come and skate. The next thing is those girls will ask, ‘What can I do to get started in hockey?’

“We’ve had more success with current girls asking their friends as compared with boys. Girls are more social in that they want their friends to try it.”

What’s been quite beneficial to the Ice Den is approximately 40 percent of the girls’ fathers have helped one way or another with the program, because they want to see their girls come in and play with other girls.

“Those initiatives from USA Hockey have been beneficial for us in terms of bringing in girls for our program,” Wemple said.

Given this season’s success, expansion is on the horizon.

“Sondra has talked to other people and seven girls playing in the Cocoa Beach area are mixed in with boys and want to play in our program as is the case with girls in Kissimmee,” Wemple said. “There are girls at other rinks looking to come here.

“There is the potential we’re going to expand and add an all-girls team in the 10U division and expand to more than one team in the 12U and 14U divisions.” 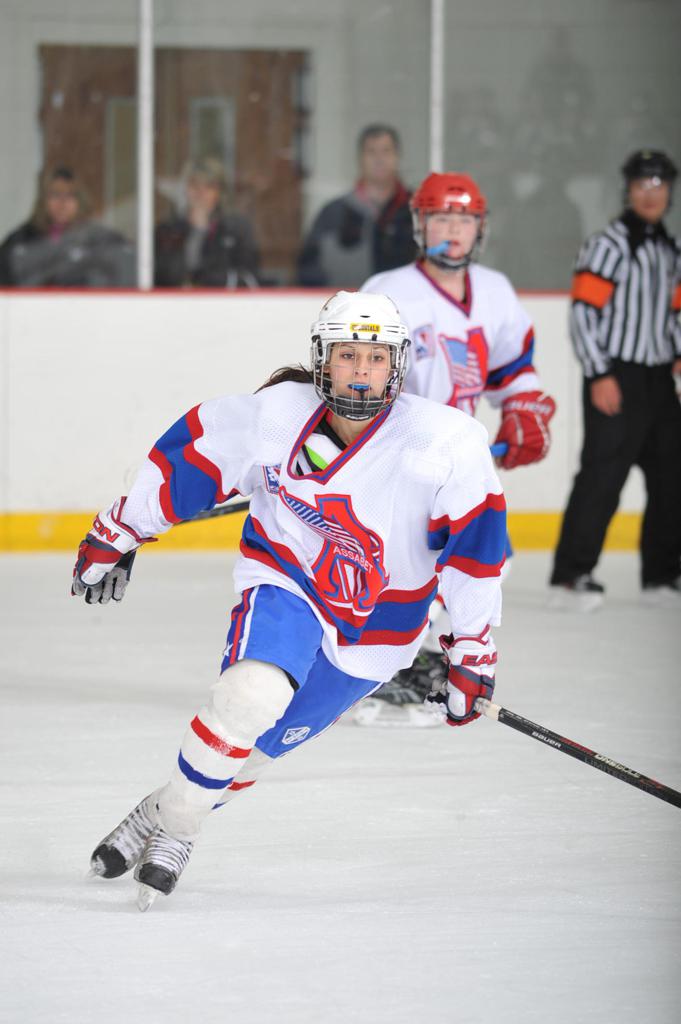