Be it football or something else, adding other activities can boost hockey skills and enjoyment

After coaching high school hockey in Minnesota for 31 years, Mike Guzzo knows a thing or two about what’s best for an athlete.

And just like USA Hockey and its American Development Model, Guzzo recommends that athletes avoid early specialization in a single sport.

“We encourage three-sport athletes,” said Guzzo, head coach of the North Shore Storm. “We’re not pressuring kids into being one-sport athletes. A lot of times, they have that competitiveness and the ability to compete more than others who play (only) one sport.”

North Shore is a co-op team that draws athletes from a remote, beautiful 90-mile stretch of Highway 61 alongside Lake Superior that includes high schools in Grand Marais (Cook County), Silver Bay and Two Harbors. It’s the only high school hockey option available to athletes in those communities.

“When you play one sport, you’re limiting yourself,” Ketola said. “You’re staying in one box. You’re not testing yourself. Sports are one big test. The harder you push yourself, the farther you can go. 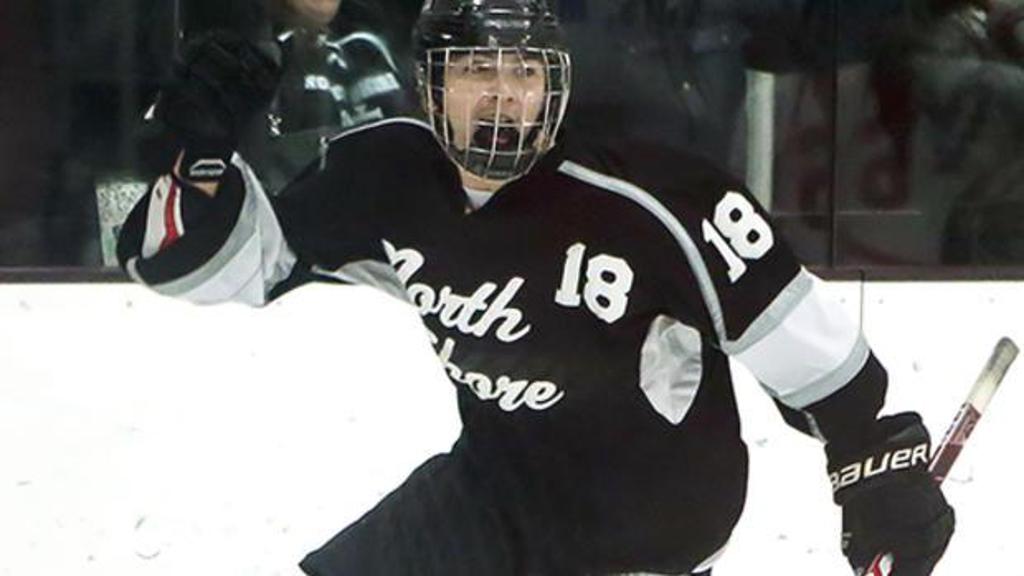 “You don’t want to stay in your comfort zone. For me, I’m not the best baseball player, but I give 100 percent and I get out of my comfort zone.”

“The kids make a real commitment,” Guzzo said. “They practice at rinks in Silver Bay and Two Harbors. The Cook County kids have to travel 90 miles to Two Harbors and 60 miles to Silver Bay. It shows their commitment, especially for a three-sport athlete, and it works.

“Most of our hockey players are big-time football players. They put a lot of time into their sports.”

“You get certain things out of other sports that you don’t get in hockey,” he said. “There are things you learn in football and baseball that will help you on the ice. And you want to stay in shape all year-round."

“Football keeps me in shape over the summer to play hockey. Swinging the bat helps on the ice in terms of eye-hand coordination. In baseball, you also learn how to block pitches in the dirt [Ketola is a catcher].”

Besides being a defensive end/tight end at Two Harbors (and being selected for the 2016 Minnesota Football Showcase All-Star Game), Keech also played goalie for the North Shore hockey team.

“Keech played soccer and he didn’t start playing football until he was a junior in high school. He didn’t play goalie until he was a bantam,” Guzzo said. “He put on the goalie pads and worked hard to become a good goalie.

“I think somebody can find their sport later in life, whereas somebody who specializes might not make that discovery. And I always think skills go hand in hand. Tennis, for one, is good for eye-hand coordination, which is a skill that’s valuable in almost every other sport, too.”

Keech, who will play football for the University of Minnesota Duluth this fall, was quick to offer his reasons for playing multiple sports.

“I think the main reason was I wanted to stay active,” he said. “I feel some kids say, when they only play one sport, it gets old. In my case, [playing multiple sports] makes other seasons more interesting.

“I want to keep trying new sports because it’s fun changing sports from season to season.”

In addition to football and hockey, Ketola has dabbled in tennis and golf.

“I just like to compete and do something year-round,” Ketola said. “Hockey always has been my favorite, but I love playing football and baseball, too.

“I’ve always been more competitive than most people. You’re always active and staying in shape. You’re part of a team and never feel like you’re isolated.”

Guzzo believes burnout is a distinct possibility for an athlete who specializes in one sport.

“I think the freshness for an athlete coming into a new sport helps,” Guzzo said. “If you don’t get a break, you get a stale player that winter.

“Our multi-sport athletes, they’re pretty fresh because they’ve come off a winning season in football and they feel we’re going to keep winning.”

Specializing in one sport is the last thing on Keech’s mind.

“It takes the fun out of things because you can’t try new things,” he said. “If you specialize, you don’t get a chance to develop other skills. If I had not tried football, I wouldn’t be able to play in college. The football thing was an eye-opener.

“Even watching the state tournament now, I see (long-time) goalies who are getting scored on as much as I did. I only started playing goalie four years ago, but playing other sports helped me play goal. You have to be good at other things. If you’re an athlete, you’re an athlete. You have to enjoy yourself a little bit.”