Montana Rink Back from the Brink

With the help of Zanae Bates, Butte Community Ice is on the rise

Zanae Bates admittedly never played hockey, but she was no stranger to the ice.

Figure skating was her sport of choice.

But due in large part to her son, Beau, Bates now is an integral member of the Copper City Kings youth hockey program. 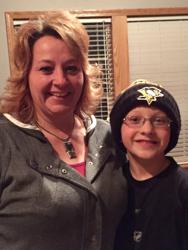 “Try-hockey-for-free brought me into the program because my son wanted to try it,” Bates said. “He fell in love with hockey and here I am.”

And where Bates is now is in her fourth year as a member of the Kings board of directors as well as the Kings representative to the Montana Amateur Hockey Association.

“I had two cousins who played hockey and I watched them all the time,” Bates said. “But if my son never had tried hockey for free, I never would have gotten involved with the Copper City Kings program.”

As a board member, Bates has growth goals for the Kings.

“I would like to see us increase our number of players so we can have different levels including A, B and a house team,” she said. “Right now, we’re at a disadvantage because we don’t have the numbers.”

At one time, the Copper City Kings almost didn’t have a rink, either. But due to the efforts of Bates and her fellow board members, the Butte Community Ice Rink is now on solid ice.

“Financially, the rink almost was ready to be shut down,” Bates said. “Since we stepped in and started promoting on social media that we have activities going on at the rink, we’ve become financially stable.

“I know our numbers have risen since we’ve been involved with social media. Getting the word out more often in terms of what’s going on at the rink has helped.”

Spreading the word that the Copper City Kings exist is important considering other sports in which youngsters can participate.

“Hockey is popular, but it’s not the most popular sport [in Montana],” Bates said. “You have a group of people that love the sport and promote it.

“We’re hoping to grow it so it becomes one of the top sports in which children would like to become involved.”

Once Bates became involved with the Montana Amateur Hockey Association, she joined in a myriad of activities including planning, coordinating and running coaching clinics, referee seminars, the Montana Player Development Camp, the High Performance program and American Development Model training for coaches.

“I don’t focus on one thing,” Bates said. “As a group, we’re trying to grow the game in the Treasure State League. That’s been a huge focus in this league. We’ve done a lot in terms of promoting hockey for girls and we want to train more people to try playing the goalie position.

“In Montana, there also is a group that does sled hockey, so that’s being promoted a lot in our state.”

Last fall, Bates attended the Montana Hockey Summit in Bozeman, which proved to be informative.

“I went to a lot of meetings to see what was going on,” Bates said. “We listened to a lot of different USA Hockey people who came in and promoted development.

“I learned that keeping kids involved is very important regardless of their hockey skills. Keeping everyone playing the game and keeping them coming back is important. I look at it at that level; keeping the kids coming back is critical, because you can lose children as they get older and become involved in different sports or activities.”

All things considered, being affiliated with the Copper City Kings has given Bates a great deal of satisfaction on two fronts.

“On a personal level, just watching my son learn the game and grow the love for it has been rewarding, as well as the changes that have been made over the last four years in his skating ability,” Bates said. “On the rink side, I love that we have so many people involved in hockey and that they want to continue to grow the game and bring in more people.”