Start Summer Off Right With Dryland Games and Training Tips

We are in the Information Age and USA Hockey has put a wealth of hockey knowledge into your pocket.

The app has been downloaded more than 130,000 times, with more than 15,000 coaches opening accounts with the service. Its popularity has spread beyond the U.S., with more than 11,000 sessions opened in Canada and nearly 5,000 in Morocco (yes, Morocco).

“This has the potential to be a global tool. The No. 4 city [for usage] is Casablanca,” said Mark Tabrum, director of the USA Hockey Coaching Education Program. “What we believe happened is that they hosted a tournament, and someone there must’ve had the app, told people about it and it just blew up.

“This is a product we made for USA Hockey members to help hockey in America. However, helping hockey internationally is a bonus and it’s fun to see coaches around the globe using USA Hockey tools to grow the game.”

Maybe the best feature: it’s free to anyone with a smartphone or tablet.

“Used at the highest level, it’s a free tool for hockey coaches that puts all of USA Hockey’s coaching resources into the palm of their hand,” said Tabrum.

Here are 10 great features of the app that will help you get more out of your hockey experience, whether you’re a coach, parent or player.

At the youth level, coaches are often volunteers or have primary jobs outside the hockey world. So, as much as they might like to be full-time coaches, they just don’t have the time to constantly plan practices.

“You get off work late, you get to the rink and think, ‘What am I going to do for practice?’” Tabrum said. “A coach can go to their age-specific plan, find about where they are in the season, and print that plan and run it for practice.” 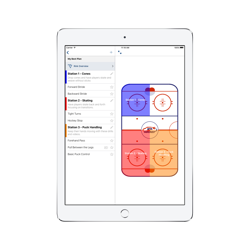 Once you become comfortable with the app, you can dive into customizing your own practice plans. The first step for this function is to sign up for a free app account. Once you’re registered, you can use all the resources in the app to create custom practice plans.

Coaches can outline entire practices, and use the app to assign drills and stations to their coaching staff. This feature will log an entire season of practices and help coaches ensure that there is a proper balance of skills, drills and small-area games.

“Even with multiple teams on the ice, you have the ability to, in the app, break the entire ice up into sections and stations, and those into drills accordingly,” Tabrum said.

Previously parents or coaches wanting to track an individual’s activity on the ice had to log what the player was doing – whether it was skating, puckhandling, shooting or passing – on a piece of paper. With Mobile Coach’s activity tracker, you can log a player’s entire season of activity and monitor the amount of reps their getting with each practice.

“Now it’s all tracked with the touch of a button,” Tabrum said. “If a kid is skating, you hit the button and it tracks, timewise, his or her skating. So, you can actually see what the player is doing throughout the practice or game.”

“It gives player analytics,” Tabrum said. “If you track 25 practices, you’re able to see the growth over time. When you have and see the data points of a properly run ADM practice, as far as puck touches, passes and shots, the benefits are clear.” 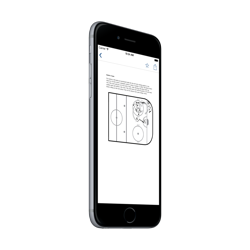 “The small-area games book used to be a manual that was printed – it was a big document,” Tabrum said. “It used to be this big manual that you had bring to the rink and flag and highlight and make photocopies.

“The small-area games section is probably worth the download alone,” Tabrum said.

Oftentimes at the youth level, coaches don’t know a lot about teaching goaltending specifics. Sometimes lining up pucks at the top of the circle and firing wristers is the only goaltender-specific drill a team will do in a day.

The fear of not knowing what to do for your netminder is no longer a hindrance with Mobile Coach. It has five sections of goalie-centric drills and a video section specifically teaching goaltending technique. For those coaches who might not know much about the position, the app can be like another assistant coach specifically for netminders.

There’s always something to learn and USA Hockey is a great source for the latest developments in coaching. Mobile Coach aggregates all the latest news from USA Hockey like an RSS feed.

“This pulls the latest articles from USAHockey.com,” Tabrum said. “The second we publish an article and tag it for coaching, it goes to the app. You always have the latest coaching news from USA Hockey.”

Just like when receiving a text message, the app sends out push notifications whenever there’s added content, so you never miss out on the latest news and developments.

Youngsters learn by watching and there is an ever-expanding library of nearly 300 free videos for anyone with the app.

“Years ago, we came out with our Skills and Drills DVDs, which was 400 on- and off-ice drills,” Tabrum said. “Those are all on the app.”

Found under the Manuals heading, the app includes the digital version of the entire USA Hockey Rulebook. The rulebook also has a search function with which users can find a vast library of resources, including rules, descriptions, videos or examples.

“It has everything you need to know the rules of the game,” Tabrum said.

Sometimes you know what you want, but just don’t know where to go. Just like Googling has provided internet users with endless information, the smart search function makes it easy to find anything in the app.

“As you start typing, it pulls content for you,” Tabrum said. “If I pull up the search and start typing ‘checking,’ by the time I get to ‘C-H-E-C,’ I have three Skills and Drills, the Checking the Right Way manual and probably 100 videos.”

USA Hockey is always looking to improve its tools and the Mobile Coach App is no different. One of the best things about the app might be its potential. Currently on Version 3.0, Tabrum expects the next update will bring even more innovation.

“We’re always trying to make it better,” said Tabrum. “If you look at where it was, we didn’t even know what we had when we started it. It was just a library. We’re constantly listening to our coaches and trying to deliver a better product.”

Tabrum said there will be significant upgrades in the next version, especially to the activity tracker, whiteboard, navigation and expanded app tutorials.

“Version 4 will be a product that every youth hockey coach is going to want to have,” Tabrum said.

Cross-Ice Hockey: Not Just For 8U Programs Anymore