Prepping for the playoffs 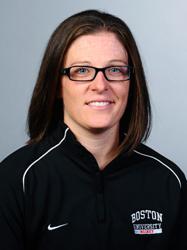 Allison Coomey knows what it's like to be a part of important hockey games. As an assistant coach on the Boston University women's team, Coomey has worked with the Terriers the past nine years, winning five Hockey East tournaments, and twice making it to the Frozen Four.

Coomey chatted with USA Hockey and offered her advice on the kind of preparation necessary before a playoff game.

USA Hockey: Is the coaches’ message different before a playoff game compared to a regular-season game?

USA Hockey: Is it good for younger players to be in pressure situations?

Coomey: It's definitely good to know how it feels to lose, and at the end of the day, as a coach, you just want your players to play as well as they can. Sometimes they're just not the better team. It's just making your players realize that if they play their best, they’ll be happy with their performance. It's a good lesson to learn how losing feels at a young age, and when you feel that way, it makes you more excited for that next season. Having that experience of losing will motivate you.

USA Hockey: How do you stay even-keeled as a coach?

Coomey: That's the hard part. Every season is different, and you’ve got to keep it in perspective. It is our livelihood, but it’s also a game. It's important to not make it entirely about wins and losses. It's tough for coaches at any level, because of how invested you are in it. You have to show kids consistency with your approach, making practices consistent, and the kids will feel that way. If you don’t get too high or low, it helps kids play through adversity, and perform in a way that's not too up and down.

USA Hockey: Should your prep be more intensive?

Coomey: It depends on who you're playing. At the end of the day, if you're working on the things that your team needs to work on, or improving on the things that you're good at, if you're focusing on 'team,’ if you're practicing that, it's more beneficial than what any other team is going to bring. I'm a believer that if you work on your game, the opponent will have to play your game, and you make them adapt to what you're doing.

USA Hockey: Are there any tips to give players for dealing with nerves?

Coomey: If a team is more positive about their approach to the game with each other, that helps. When things go wrong and your first reaction is to point to other people on the ice, that’s not helpful. It's a team sport, and you have to win as a team. The more positive you can be the better.

USA Hockey: As a coach, how much do you have to protect against doing too much?

Coomey: It's important as coaches, when you're on the bench during the game, to try not to let the refs or other factors gets in your head. The kids look to you and react to what you do. If you're yelling at the refs, or if you're yelling at your players to do things, it fosters more of a negative energy. Trying to stay positive is important, and also just keeping calm. Games should be for the players to go out and execute what you taught them over the week. It shouldn't be situation where you're trying to teach new things from the bench.

5 Lower Body Exercises to Increase Speed and Strengthen Your Game