Inspired by Daughter to Make Girls Hockey a Reality 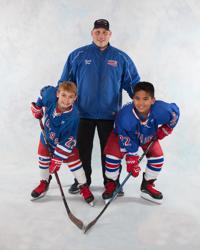 Dan Feldman’s daughter, Julia, was frustrated having to play primarily on male-dominated hockey teams. But if not for that frustration, the Amherst Hockey Association might not have an all-girls program today.

“Seven years ago, Julia was a mite,” Feldman said. “She had just learned to skate and really wanted to play hockey. That was back in the day when we were doing full-ice mites. She was on a team with 16 kids and every other player was a boy. She really felt isolated, like she was on an island.

“It was discouraging for her. I told her I would always be there for her. The boys were big, strong and physical. She was somewhat petite. She didn’t have any girls to share her thoughts with on hockey from a girls’ perspective and she quit.”

Julia Feldman tried moving on to swimming and volleyball, but she missed hockey.

“I was frustrated that she had to deal with that issue which boys don’t have to deal with,” Feldman said.

That’s when Feldman decided to do what he could to help, and became more involved with the AHA’s administration.

Initially, he queried board members about establishing an all-girls program. He didn’t encounter any resistance to the idea, but there were practical concerns about diverting resources and energy from the AHA’s boys’ travel teams.

“We only had so much money and ice time plus a limited number of coaches,” Feldman said. “People said we support the concept but we don’t want it to take away from our primary mission which is to provide travel hockey for boys.

“I did a lot of research. I spoke with different associations that had girls programs and asked how they generated interest and brought it in at a cost where families would give it a try.”

After he derived sufficient information, Feldman felt he needed somebody else to champion it.

“I could pave the way,” he said. “I could show a person what we needed to do. But I didn’t want to be seen as focusing all of my attention on that as compared with the 200-plus boys in the association.

“I found the perfect person in Karen Skolfield who is a professor at UMass-Amherst. She was on the same coaching staff as I was as an assistant.”

The next step was to create a girls hockey committee. Then Feldman and Skolfield had to find ice time for practices and scrimmages.

“It was perfect timing because USA Hockey came up with a try-hockey-for-free day in 2015 and the roll out occurred the following season,” Feldman said. “We marketed that to the best of our ability and placed in the top five in the country for try-hockey for-free attendance.”

Due in large part to the efforts of Feldman and Skolfield, a girls’ program was finally on solid ice.

“All of a sudden moms and dads came out of the woodwork,” Feldman said. “A lot of dads who had been supporting their sons let everybody know they also had daughters.

“I think there are a lot of folks who feel you can’t create a new division. But if there is one, they can support it.”

Approximately 30 girls signed up for the 2015-16 season, which was only the beginning.

“This year we have a girls house team with 27 players and a waiting list of girls who would have liked to be on the team,” Feldman said. “We didn’t want to have too many players on the ice for the number of coaches that were available.

“We also have a snowball effect for the girls who are on our travel teams. For example we have 14 girls in our squirt division. We have a ton of girls in our learn-to-skate program. Overall, we probably are close to 80-plus girls.”

To say the response from parents was beyond expectations would be an understatement.

“It was through the roof,” Feldman said. “We were like rock stars. There were people in our association who only had sons but were excited about our having a girls’ program.”

The AHA girls’ program then received a major bonus when it applied for and was awarded a $5,000 grant from the Mike Cheever Foundation. The grant is designed for Massachusetts hockey associations to help increase participation, retain existing players and to implement practices consistent with the American Development Model which the AHA adopted six years ago.

“We were able to obtain ice,” Feldman said. “It helped with our marketing and our ability to obtain equipment.

“I laugh when I tell my daughter our hockey division should be named after her. Had she not had the experience she did I might not have recognized the need and attacked it.”

Now, Feldman is more involved with the AHA than he could have imagined because not only is he the association president, he’s also the ADM coordinator and the learn-to-skate coordinator.

Considering the AHA serves eight other communities in western Massachusetts besides Amherst, Feldman at times finds himself in what he describes as “a part-to-full-time job.”

The commitment of people like Feldman is one reason why USA Hockey is celebrating 80 years of growing youth hockey in America.

“I have very good associates that allow me to delegate,” Feldman said. “We have a strong treasurer and vice president. That’s a lifesaver.

“A lot of people start the day thinking if you want something done right you have to do it yourself. But if you really want to be successful, association-wide, you have to trust other people and empower them. The hardest part is recognizing when other people are better at something than you are.”

Considering how the girls’ program has grown, at face value Feldman appears to have mastered this aspect of his positions.