Register for Try Hockey For Free 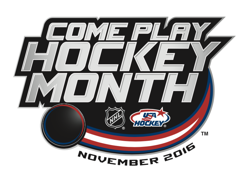 Children all across the United States who have never before tried hockey will have a chance to skate, shoot and score on Saturday, Nov. 12, 2016, as USA Hockey hosts Try Hockey For Free Day as part of the sixth annual Come Play Hockey Month.

Parents and guardians can find the Try Hockey location closest to them and register children between the ages of 4 and 9 years old to participate by visiting TryHockeyForFree.com. Nearly 500 sites throughout the U.S. will host a Try Hockey For Free event on Nov. 12. Forty-nine of the nation's 50 states will be represented, led by Wisconsin with 62 host sites.

Host sites will provide limited equipment for children to borrow during Try Hockey events and no experience is needed to attend.

NOTES: Entering its seventh season, USA Hockey's national Try Hockey For Free Days have introduced more than 115,000 children to the sport ... Try Hockey For Free Day is part of Come Play Hockey Month, a component of the NHL's Hockey is for Everyone program, which provides children of all backgrounds the opportunity to play hockey. The nation's hockey community and United States-based NHL clubs, players, alumni and fans will support Come Play Hockey Month with a full slate of activities, including the NHL Sled Classic, which will be held Nov. 17-20 at the Nashville Predators' Ford Ice Center in Antioch, Tennessee ... Join the conversation and post your photos and videos on social media using the hashtag #TryHockey

ANSWER: While USA Hockey does sanction many High School hockey teams, many teams are also governed by the National Federation of High Schools and your local state high school athletic association and would not fall under USA Hockey jurisdiction.

QUESTION: What is the rule for a referee, if they were to antagonize or have words with a spectator in the stands?

ANSWER: USA Hockey Officials are instructed to never interact with spectators. If an official in your area displayed poor behavior that falls outside the USAH Officiating Code-of-Conduct you may report the behavior to your Local Supervisor of Officials. Contact information can be found by using the Officiating Directory link under the OFFICIALS tab at USAHockey.com.

QUESTION: A 10U player gets five penalties in one game (4 tripping and 1 cross-check). Does he get a game misconduct penalty?

ANSWER: Rule 401(b) in the USA Hockey Playing Rules states,

QUESTION: A team who is winning gets a power-play. They take the puck behind their own net and do not move the puck for the entire two minute penalty. I think play should have been stopped and a face-off called for failing to keep the puck in motion. What is the proper call?

ANSWER: There is no rule in the USA Hockey Playing Rules that mandates a team must advance the puck up the ice. However, there is also no rule that prevents a team from executing a fore-check to force a player to leave from behind their own goal.

QUESTION: A goalie makes a play to cover a loose puck in front of the net and a skater makes a play to poke the puck into the net. The goalie covers the puck and the player makes contact right as the goalie covers the puck. Should this be penalized as a slash or since it was almost simultaneous or is it just a stoppage? There was no significant force with the poke or violent nature in the player's motion.

ANSWER: An attacking player may not make contact with the goalkeeper who is positioned in the crease. While the contact may not be malicious, players are not allowed to slash or poke any other opponent and the goalkeeper is not an exception.