As part of USA Hockey's 80th Anniversary, we will shine a spotlight on the countless volunteers and instructors who spend time "Behind the Glass" to help our sport grow.

Have an idea of someone we should feature? Email Us Here 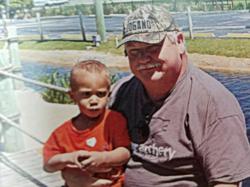 Whenever Glen Dearing saw someone at the Extreme Ice Center in Indian Trail, North Carolina, he called him or her “knucklehead."

Everyone was “knucklehead” — parents, children and adult hockey players. Dearing seemed to know everyone and everyone knew him. A staple in the hockey community near Charlotte, Dearing lost his battle with acute myelogenous leukemia on Sept. 11. He was 57.

Dearing was the man behind the scenes at the Extreme Ice Center. He was the adult hockey director for seven years, the high school hockey director at the rink for over a decade and was always in charge of setting up USA Hockey tournaments that were hosted by the rink. Dearing always took the time to help teach young players about hockey, how to lace the net and how to keep score.

It’s the hard work and dedication of people like Dearing that has been vital to the success of USA Hockey throughout its 80-year history.

Dearing had a profound impact on the community, which includes young hockey players all the way up to the adult skaters.

“You never know about somebody’s life until after they’re gone and then the stories start to come through the woodwork,” Mulhall said. “Everybody wants to talk about him because he was such a cool guy.”

The Extreme Ice Center opened in 2006 and Dearing started volunteering from day 1, helping kids or assisting in lining up referees for events. Dearing was always doing something at the rink. Pretty soon, Mulhall got him on the payroll.

“He was part of the rink fabric,” said Mulhall, who was friends with Dearing for 18 years.

With the adult hockey program struggling to stay organized, Dearing took over as director in 2009.

“He was kind of the glue that held everything together,” said Ron Prisby, Dearing’s longtime friend and a player in the adult hockey league. “If there were ever any issues, you would always go to Glen. One good thing about Glen was he was always approachable. If you had an issue with a call or this team was kind of hacking out a little bit or something, you could always go in and see him. ... No matter what it was, he would at least hear you out and give you a chance to speak your mind.”

Dearing hailed from High Bridge, New Jersey and moved to Charlotte in 1998. Away from the rink, Dearing loved outdoor activities. An avid bow hunter, he belonged to the Indian Trail Bow Club. Dearing and Prisby spent many weekends together hunting.

Dearing would actually hunt quite often in Mulhall’s backyard.

“We got to know each other on a very personal basis, because whenever he took anything out of the backyard, the agreement was I got some,” joked Mulhall.

Dearing also loved to spend time with family, including his wife, Kathy, two children, Willie and April, and three grandchildren.

“He lived for his grandkids,” Prisby said. “He had his grandkids into hockey too and he just loved watching them play.”

Dearing was diagnosed with leukemia in August 2015, but continued to fight the entire time. During his battle, Dearing had to undergo a bone marrow transfusion, but his body rejected the donor marrow.

Even late in his life, Dearing would still keep everything organized at the rink. If he couldn’t help out, his wife, Kathy, would fill in.

“It was such a shock, not only us but in the adult league, nobody knew how bad he was because he was always so upbeat, positive, ‘I’m walking on sun’ kind of person,” Mulhall said. “None of us knew how absolutely how far gone he was.

“From the day I met him until I talked to him three days before he died, he still sounded like the same person to us.”

After Dearing passed away, the adult hockey league players wanted to honor him. Black stickers were made with the initials “GD” on them and they were handed out to players to put on the back of their helmets.

“It was just a cool dedication to Glen to show that a lot of people really loved him and respected him,” said Prisby, who is still getting requests from players for stickers.

Mulhall is working on a tribute to Dearing at the Extreme Ice Center. She is planning to a place a small plaque near the entrance of the building. Dearing may be gone, but he will never be forgotten by the hockey community in Indian Trail.

“He just touched so many peoples’ lives,” Mulhall said.