BUFFALO, N.Y – The U.S. and Canada will make history when the two rivals battle outdoors on Dec. 29, 2017, in a preliminary round game of the 2018 International Ice Hockey Federation World Junior Championship. The announcement, which was nationally televised on NHL Network from KeyBank Center in Buffalo, came today from USA Hockey and the Buffalo Sabres, host of the 2018 IIHF World Junior Championship.

The outdoor game, one of 31 total in the 2018 World Juniors, will be staged at New Era Field in Orchard Park, New York, home of the NFL’s Buffalo Bills. Never before has an outdoor game been played at any top-level IIHF world championship.

The IIHF World Junior Championship, one of the most highly anticipated hockey events annually, includes the best men’s players under the age of 20 from 10 nations around the world. The 2018 event will be conducted from Dec. 26, 2017-Jan. 5, 2018. KeyBank Center and HarborCenter in downtown Buffalo will stage all but the outdoor game.

“The U.S.-Canada rivalry is as good as it gets in sport,” said Dave Ogrean, executive director of USA Hockey, “and to have an outdoor game between the two countries as part of the World Juniors in hockey-rich Western New York will be spectacular.”

“The World Juniors is an amazing event itself and to add to it with an outdoor game is about as cool as it gets,” said Russ Brandon, president of both the Buffalo Sabres and Buffalo Bills. “It’s never been done before in the World Juniors and we’re excited to be making history.”

Ticket packages for the 2018 IIHF World Junior Championship will go on sale to the general public on Nov. 28. Fans have three options: the gold package includes all 31 games of the tournament, while silver and bronze packages include all games at KeyBank Center plus the outdoor game at New Era Field. Fans purchasing any of the three packages will also have the opportunity to purchase three additional tickets for the outdoor game.

Tickets will be available online at BuffaloWorldJuniors.com or in person at the KeyBank Center box office.

Season tickets holders for the Buffalo Sabres as well as USA Hockey members will have an exclusive pre-sale opportunity that begins on Oct. 31 and will be notified appropriately.

“We built the ticket packages to be very affordable,” said Mike Gilbert, vice president of administration for the Sabres and head of the host organizing committee for the 2018 World Juniors. “And we gave the exclusive benefit to those purchasing any package the opportunity to buy additional tickets to the outdoor game.”

The logo for the 2018 IIHF World Junior Championship was also unveiled today. The design depicts downtown Buffalo and also the iconic Peace Bridge, which is a connection point between the U.S. and Canada.

“We looked at a number of designs put together by Pegula Sports and Entertainment,” said Mike Bertsch, assistant executive director of events, marketing and communications for USA Hockey. “They were all terrific and had elements we liked. In the end, between PSE, USA Hockey and the IIHF, we’re really pleased with the end result.”

NOTES: BuffaloWorldJuniors.com is the online home of the 2018 IIHF World Junior Hockey Championship … New Era Field has hosted one other hockey game, that the initial NHL Winter Classic on Jan. 1, 2008. A sellout crowd (and then NHL record) of 71,217 watched the Pittsburgh Penguins beat the Buffalo Sabres by a 2-1 count in overtime at what was then called Ralph Wilson Stadium … The 2017 IIHF World Junior Hockey Championship is set for Dec. 26, 2016-Jan. 5, 2017 in Toronto and Montreal. Prior to heading to the tournament, Team USA will conduct a camp in Buffalo at HarborCenter from Dec. 16-20, 2016. 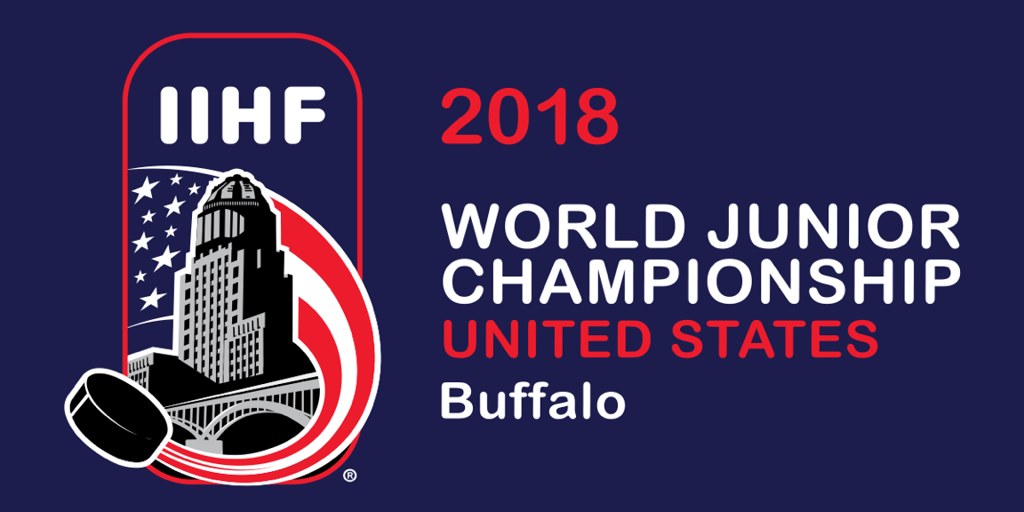