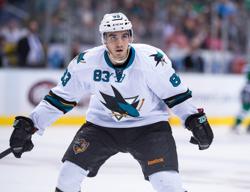 San Jose Sharks forward Matt Nieto uses The Hockey Intelligym to help ensure his game is at the highest level.

Nieto first began using The Hockey Intelligym, which was developed to help teach hockey sense, back in 2009 when he was at USA Hockey’s National Team Development Program.

“At the NTDP, we were the first team to use this program. We used the IntelliGym a few sessions a week and I immediately began to notice improvements in my game.  I was making smart, good, quick decisions on the ice. I’ll try anything if it helps improve my game and it certainly did.”

Hockey sense is one of the most important skills in the game, yet it’s the hardest to teach. The Hockey IntelliGym, a software-based cognitive tutor, is the standard in hockey sense training.

USA Hockey, in collaboration with Applied Cognitive Engineering, created the Hockey IntelliGym. It was originally developed by cognitive psychologists, computer engineers, and game theorists to develop precise instincts in military fighter pilots. Resembling a video game with cognitive scenarios similar to what players will experience on the ice, the IntelliGym trains the decision-making skills necessary to stay one step ahead of the puck and the game.

If you’re aspiring to continue to improve your game and do everything you can to better youself, Nieto suggests you try the Intelligym.

“The IntelliGym has certainly helped me on the ice with making sharper, quicker decisions, especially with reading plays,” says the Long Beach, California, native, one of many NHLers that have used the Intelligym.  “I have noticed improvement in my game as a result of the program and look forward to progressing this year. “

For more information on the science and research behind The Hockey IntelliGym, and to take advantage of the unique opportunity , visit USAHockeyIntelliGym.com.