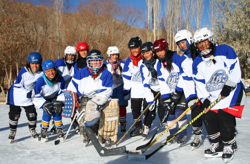 Unlike Bugs Bunny and Daffy Duck in “The Abominable Snow Rabbit,” Adam Sherlip wasn’t lost in the Himalayas, nor was he disappointed to find a frozen pond. In fact, the New York native found exactly what he was looking for in the mountain ranges of Ladakh, India, on the world’s highest natural ice rink.

It’s there that Sherlip brings hockey to the Ladakhis.

Raised on Long Island, Sherlip is a USA Hockey Level 4-certified coach with a passion for changing lives. He’s been doing it in remote hockey outposts since 2007, when he was part of a New York Islanders youth coaching contingent in China. Two years later, he founded a non-profit, The Hockey Foundation, to cultivate the game in underserved communities and non-traditional hockey markets around the globe. Since 2011, he’s trekked annually to Ladakh, where he uses USA Hockey’s American Development Model to teach boys, girls, men and women in a region where players once used rocks for pucks.

He spoke about his far-flung coaching experiences at the recent NHL World Cup of Hockey Summit, calling attention to the progress he’s seen in Asia and India, where more people – especially women – are playing the game.

“For the first time ever, India had a women’s hockey team that played in the Challenge Cup of Asia this year,” said Sherlip. “We weren’t solely responsible, but we were dramatically impactful in the growth and development of girls hockey in that area, which is gratifying.”

Story continues below the video.

Sherlip is driven to empower players and enrich lives. Connecting it to his own childhood hockey experience, he sees USA Hockey’s modern coaching methodology as a better way forward.

“The hockey culture on Long Island is deep and my youth coaches were all old-school coaches – and not in the good ways,” said Sherlip. “At the time, I didn’t understand it. Years later, when I started coaching a youth team in Queens and going to USA Hockey coaching clinics, I could see a new way of teaching focused on what’s best for the players, and I liked it. It wasn’t about coaches getting their wins. It was about age-specific learning and an emphasis on skill development, puck touches and creativity.”

As Sherlip progressed through USA Hockey’s Coaching Education Program, he experienced the typical coaching challenges, like overzealous 10U parents, and some not-so-typical, like profound cultural differences in Ladakh. It was all part of his ongoing development.

“Boys and girls are different, and everybody is different when it comes to their experiences or culture, so you learn what it actually means to be a coach,” he said.

His thirst for knowledge brought him to USA Hockey’s 2016 National Hockey Coaches Symposium in St. Louis, where he began the march toward Level 5 certification.

“I’m always looking to improve and learn, and all of USA Hockey’s CEP events have been helpful,” said Sherlip.

He will soon bring that growing toolbox of knowledge on another trip to Ladakh, where he hopes to make the region’s hockey enthusiasts increasingly independent. After that, he can turn his attention to other underserved hockey hamlets, both stateside and elsewhere, where The Hockey Foundation can further its mission.

Cross-ice instruction has paid dividends in growth of association