Purpose: To teach 8U players (or refresh 10U players) about the concept of staying on-side. This is a great game to get your players familiar with the off-side rule, especially those who are entering 10U hockey. It’s an excellent welcome-back drill to open the hockey season and a quick teaching game that helps players learn a simple but important concept. Additionally, because the drill is executed cross-ice, it sustains a high tempo and engagement for every player, as well as providing more opportunity for shooting, passing, receiving passes and performing quick changes of skating direction.

Drill Structure: Position one net in each face-off circle and play cross-ice, 3v3. Use a large, heavy-duty marker to create a blue line from the end boards to the blue line. Cones can also be placed at the opposite ends of the hand-drawn blue line for an added visual queue. Coach straddles the intersecting blue lines and fires a puck into the competition area to begin play.

Coaching Points: Before an attacking team can attack the other team’s goal, the attackers must regroup in their defensive half. Once they regroup in their own zone, they can attack the opposing team, but they must attack staying on-side at the hand-drawn midline. If they go off-side, blow a quick whistle to signify a turnover. The defending team then becomes the attackers, regrouping in their own zone before attacking on-side.

Progression: A variation is to make the attacking team complete a pass before crossing the midline on-side. 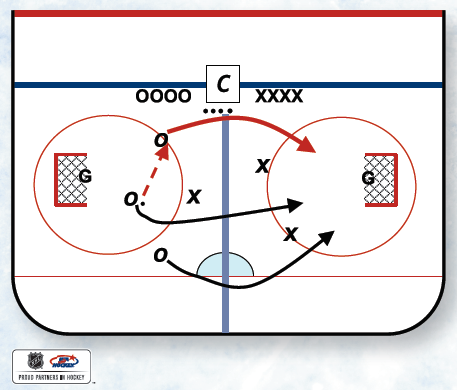 More ADM Drills of the Month