Purpose: To create a live-action situation for your team that teaches your defensemen to defend a rush, shut down the opponent and kick-start an offensive attack from the defensive zone. For the forwards, this drill teaches back-side pressure, funneling into the defensive zone and launching an offensive rush off a live break-out.

Drill Structure: Drill begins with D1 breaking puck out to O1 and O2. These three players attack 3v1 versus D2. Once the puck passes the red line, X1 and X2 backcheck the rush into the zone. Hopefully these backcheckers can apply back-side pressure to the 3v1. IMPORTANT: D1 falls out of the play after the initial attack is made. So D1 has one chance to make a play off the rush. Once this opportunity passes, D1 falls out and returns to the line. Because this D falls out, we now have a 2v3 favoring the defensive team. The puck stays live off the rush. D2 must break out puck to X1 and X2. Once this first breakout pass is executed, O1and O2 fall out of play and let the 3v1 continue to opposite end of the ice. D3 accepts new rush in the NZ.

Coaching Points: This is live action. Players must be attentive in line, active and ready to go. This drill is great for young defensemen in the sense that you can encourage them to defend a 3v1 rush, and then play live in the defensive zone. The next aspect for D is to achieve shut down or reach the puck first to create a break-out play. Once this happens, encourage the defending defensemen to change roles from defense to offense and to be aggressive with their skating to join the rush and read the rush so they become a dangerous option on the attack. For the forwards, teach strong back-side pressure, techniques for funneling into defensive zone and then supporting the puck for a break-out pass to create a 3v1 rush.

Comments: Emphasize two-way play. Drill should have high tempo and execution. If the attacking team scores off the rush, coach should throw another puck to the offense in the zone and let play continue. 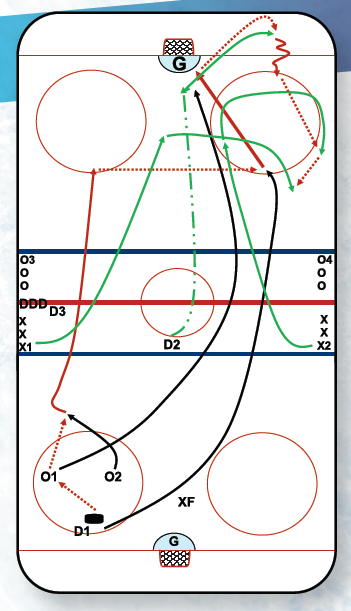